Dion reports from his weekend at the Le Mans 24 Hours endurance race, including a tour of Michelin's impressive tyre operation. 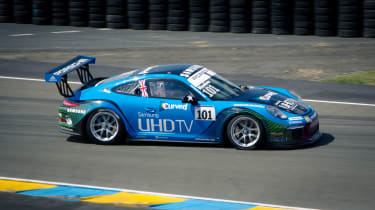 After a solid night’s sleep we are gradually forced from our beds as the morning sun begins to send the temperature in the tent soaring at a remarkably early hour. The weather forecast pretty much reads ‘scorchio’ for the whole weekend at Le Mans, and by 9.30am I see nothing to dispel that as the temperature is already in the low 20s.

Following the final qualifying running on Thursday night there is no racing at Le Mans the day before the race. The devil makes work for idle hands, of course, so the Le Mans faithful generally provide their own entertainment in and around the track on what is universally known as ‘Mad Friday’.

Before the silliness really starts, the pitlane opens to the general public allowing a front-row-seat view of each and every team as they strip, rebuild and tweak each car. Given the fantastic up-close access, the pitlane is heaving, with particular swelling in front of the works Aston, Audi, Porsche LMP1, Corvette (the crowd pleasers) and Dempsey Racing garages.

A quick errand in the cars makes for a slow crawl through traffic until we come across our first bit of Mad Friday action. A horde of sunburnt lager soaked Europeans heave into the road as if they are spectators from a 1980s Group B rally stage.

Reaching the middle of the throng, an alpha drunk steps out in front of each car holding a sign reading: ‘You burn, we drink". Judging by the black lines on the road and a few hundred drunk folks, his signwriting technique seems to be compelling people to action. Non-compliance from a car in front draws boos from the crowd and a sudden onslaught of Supersoaker fire into every open window of the offending vehicle.

The mob has spoken. My turn.

Now this type of japery is never normally an issue in a 500bhp car, but being five-up and shod with a fresh set of Michelin's finest means the M5 hasn’t broken traction up to this point on the trip. Thankfully the alpha drunk has minions dousing the road with water, so a maximum-attack launch with DSC off leaves a pleasing number 11 for a good distance up the street.

Back at camp, we load up our two-wheeled conveyance, a lovely old foldaway bike known as the Stowaway, and head back onto the peripheral roads around the circuit to observe a bit more malarkey.

It’s all harmless fun and we only come across one minor incident that had involved an over-ambitious manoeuvre by a guy piloting his Z3 M Coupe in a pair of flip-flops and a T-shirt with the word ‘Genius’ emblazoned across the front. As the recovery lorry drags his pride and joy from the ditch I am sure the BMW’s driver is regretting the attempted display of driving prowess almost as much as his choice of footwear and the now highly ironic T-shirt.

Any chance of a lie-in is quickly eradicated by the thunderous sounds of race cars on track. Various invitational, classic and one-make race series all occupy the track in the hours running up to the 24-hour race for the benefit of super-keen sober folk.

I head off for a fascinating behind-the-scenes tour of the Michelin tyre operation at Le Mans while the rest of the guys get breakfast.

The scenes at Michelin race HQ are not exactly like those at your local tyre fitting centre. Seven thousand tyres are brought to Le Mans in 70 trucks, with 1500 of those tyres going to the LMP1 teams alone. Forty tyre fitters are swiftly fitting and balancing dozens of tyres in an orchestrated fashion with a particular focus on full wets… Hmm. Rain ahead…

Back in the Michelin hospitality suite, none other than nine-time Le Mans winner Tom Kristensen stops by for a quick chat, looking as calm as you like only two hours before race start.

Speaking of race start, I thank the folks at Michelin for the insightful tour and head back to camp to prepare for the big moment.

Camping chairs and cameras are slung over shoulders as we make our way up to the first curves of the lap for our usual race-start vantage point. This is a great spot that sees the cars rise, fall and swoop through the esses, hit the brakes hard and them jump back on the power as they head off towards Tertre Rouge. Combined with the vast differences in closing speeds between the car classes, this has to be the top viewing area for the first few hours of the race.

A few hours after dark it’s time for some ‘night ops’ as a few of us make the cross-country trek under moonlight to the Mulsanne Straight to watch the cars pushing the double ton. It’s a truly amazing experience that fuels a whole new level of respect for the drivers’ abilities.

Next it’s back to the more twisty parts of the track for some night photos. Glowing front discs, streaking headlights and the resident Ferris wheel at Le Mans all make for good visual subject matter before finally hitting the pillow at 5am.

A couple of hours’ shut-eye, then it’s back up to watch the final few hours of the race. It is amazing to think that these cars – with a little help from a few reels of gaffer tape and some cable ties – are still functioning at this pace after 24 hours. The LMP1 cars average 150mph around here and by the time they cross the finish line for the last time they will have covered 17 Grand Prix distances – the equivalent of almost a full F1 season.

Once again Audi cruises to victory – its 12th in 14 years – with a record-breaking crowd of 263,000 cheering the team on. People often bemoan yet another Audi win, especially this year as the number 7 Toyota led the race for nearly 14 hours before mechanical issues halted its progress.

The Audis were not without their issues either, however, but any team that can change fuel injectors in four minutes and a glowing turbo in 12 is clearly not banking on luck to see its cars across the finish line.

As they say here at Le Mans, ‘to be first, first you must finish’.