Michelin at the Goodwood Festival of Speed

Feel the need for the Goodwood Festival of Speed. As the official tyre supplier to one of the world’s most magical motorsport venues, Michelin was out in force 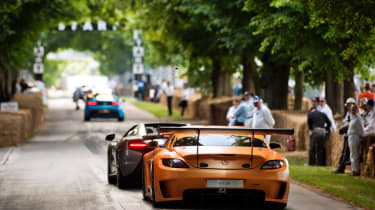 Of all the world’s motoring events, the Goodwood Festival of Speed is truly unique and enchanting. Set in the picturesque grounds of historic Goodwood House, it has the air of a wonderfully eccentric English garden party where thousands were invited, along with their favourite cars and motorcycles, and they all turned up. Then there’s the hillclimb course, which blends drama and challenge into its straights and corners, and wraps them all up in the beauty of the English countryside.

Crucially, there are the cars and motorbikes, a high octane smorgasbord of some of the most iconic racers since the dawn of motorised competition, together with legendary road cars, old and new. But it’s the access you have to them – standing within inches and perhaps reaching out to touch them in the paddock – that distinguishes the Festival of Speed. And Goodwood teems with racing heroes who, unlike at many motorsport events, mingle with the crowd and chat with fans.

Each year the organisers of the Festival of Speed choose a theme as a guide to help them select which cars and drivers to invite to the event – for 2014 the theme was ‘Addicted to Winning’. And it was a theme that applied equally well to the substantial presence Michelin enjoyed at this year’s Festival of Speed: the company first started racing in 1891 (via pneumatic bicycle tyres) and over the decades is the only tyre company to have won every championship that it has entered.

Not that there was any serious racing (other than against the clock) to be done at the Festival of Speed, but Michelin UK was proud to sponsor the overwhelmingly well attended Michelin Supercar Paddock, and the associated Michelin UK Supercar run up the hill. And Michelin was not only the Festival’s official tyre supplier for 2014, it’s also the official tyre supplier for the Goodwood Revival. To be supporting both the road and race sides of Goodwood’s offerings is particularly appropriate for Michelin, as the company uses motorsport as a test laboratory for tyre development and technology, the benefits of which then filter across into Michelin road tyres.

The Michelin UK Supercar Paddock – now in its third successive year – was like an evo reader’s dream garage, and many of the more than 40 cars on display were among those that Michelin supplies with original fitment tyres. Pride of place arguably went to the Koenigsegg One:1 hypercar, that was making its UK debut, but also wowing the crowds were the Porsche 918 Spyder, McLaren P1, Ferrari 458 Speciale and LaFerrari, Mercedes-Benz SLS AMG Black Series, Nissan GT-R Nismo, Noble M600, Pagani Huayra, Bentley Continental GT V8S and Honda NSX concept car. There were other thrillers, too, including the Lotus Elise V6 Cup, Aston Martin Vanquish Volante, and Jaguar F-Type Coupe R, to mention but a few.

In addition to Michelin’s Supercar Paddock presence, the company had constructed an impressively large and modern-looking stand, where interested spectators could not only be introduced to Michelin’s extensive range of high performance road tyres, but also learn more about how those tyres are made and thoroughly tested. Michelin “lab scientists” were on hand with cutaway sections of tyres and raw materials, to illustrate the inner workings of a vital car component that many of us take for granted.

With around 30 UK-based personnel involved directly in operations during the four public days of the Festival of Speed (and others responsible for building Michelin’s show stands and dismantling them afterwards), Michelin’s commitment to the event was considerable. And Michelin’s technicians were also available to offer advice and assistance to the numerous participants using the company’s products for their hillclimb heroics.

As spectacular as it appears to Goodwood’s enthusiastic crowds, the relative brevity of the hillclimb course doesn’t put any special stresses on Michelin’s tyres, but as Jamie McWhir, Michelin’s Technical Manager UK, explains, there are issues to be aware of. ‘We don’t tend to develop tyres specially for the Goodwood hillclimb as it’s not long enough to place extraordinary demands on our tyres.

‘The exception this year was Sébastien Loeb’s Peugeot 208 T16 Pikes Peak car,’ Jamie continues. ‘Its tyres required a specially soft, sticky compound – at the Festival of Speed you’re not permitted to use tyre warmers to get the rubber up to temperature before your run, which in a car as powerful and fast as this is an issue, because it’s then hard to get the compound up to a decent operating temperature. And on such a comparatively short distance, compound is the key.’ Nevertheless, Loeb set the fastest time of the weekend, blasting up the hillclimb in 44.6sec.

Lack of tyre warmers notwithstanding, drivers of Michelin-shod cars at Goodwood had plenty to be thankful for, as Anthony Reid, who drove the Noble M600 to an admirable second place in the Supercar Shootout, reveals. ‘From a driver’s perspective, you need a tyre with excellent cold start performance; the Goodwood hillclimb is so short that it’s critical to get a good start off the line and over the first 100 metres. And by the time you reach the first corner you want your tyre to be what we racing drivers call “switched on”, so you can lean heavily on it.

‘It’s also crucial that your tyres perform well under braking, as you have to use the brakes very hard here. And they have to be stable, consistent and very accurate – there’s no margin for error at the Festival of Speed, especially when you get to the famous flint wall.’

Those qualities are at the heart of all Michelin tyres, insists Jamie McWhir, whether you’re shooting up the Goodwood hillclimb or just driving around town. ‘It’s all part of what we at Michelin call our “Michelin Total Performance” package. For our everyday tyres it also includes good safety, comfort, low noise and long life.

‘And for demonstrating the high performance values of our tyres in the most exciting, glamorous and memorable arena, you really can’t beat the Goodwood Festival of Speed.’

Relive the Goodwood Festival of Speed- see the best photo and video highlights from the motoring event of the summer: http://live.michelin.co.uk/