Rallying venues come no more dramatic than Corsica, and the chance to sample some of the stages makes it well worth a visit. Read the full story here 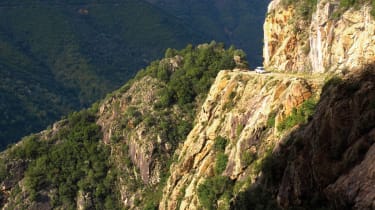 If you’re currently planning a holiday then you could do a lot worse than heading to Corsica. Although this Mediterranean island is closer to Tuscany than Nice and lies only seven miles north of the Italian island of Sardinia, Corsica is actually a region of France. With forests, startling rock formations (such as the Calanques de Piana) and snow-capped mountains as well as stunning beaches, the scenery is some of the most spectacular we have ever seen.

To be honest you could throw a dart at a map of the island and pretty much guarantee to end up driving on some fantastic roads through stunning scenery, but for a bit of added interest you will want to seek out some of the stages of the famous Tour de Corse, ‘the rally of 10,000 corners’. The modern rally doesn’t have quite the epic stages of old, but they are still held on some of the best roads, so it’s worth downloading the stage maps before you go.

If you’re staying in the capital, Ajaccio, then there are three main groups of roads that you should go in search of. To the north, head towards Casaglione and Vico, looking for the D1 and the D4. To the east, aim for Tavera and Bastelica and the D227 and D27. Finally, to the south you want to locate the D55 on the other side of Verghia.

Nearly all the roads are quiet but they are also very tight and incessantly twisting, so this is not really terrain for anything wider or lower than a 911, and if you’ve got a hot hatch or Subaru/Evo then you’ll probably enjoy it even more. You also need a head for heights, as some of the roads are extremely precipitous and notably lacking in Armco. Oh, and they also feel rather remote and occasionally suffer from rock falls or small landslides…

If all that hasn’t put you off (and it shouldn’t) then you’ll be awestruck by the otherworldly landscapes you’ll find yourself driving through. Add in thoughts of monstrous Group B cars charging along the tiny roads, barely in control and spitting flames (this is where Henri Toivonen and Sergio Cresto tragically died, signalling the beginning of the end for Group B) and you can’t fail to be inspired.

You need a little determination to get to Corsica. If you want to take your own car then it’s a long day’s drive down through France to Toulon or Nice and then a four-hour (or overnight) ferry across. Alternatively if you want to fly out then there are a few direct flights from the UK, but the choice isn’t extensive – easyJet only flies on Sundays between May and September. Try classiccartoursinternational.co.uk for an organised driving holiday

The island is just 114 by 52 miles, so nowhere’s too remote, but we’d stick to the west coast. Ajaccio is a good base for getting to the best roads. When we went there with a Mégane R26.R in 2009 (evo 127), we stayed in the Best Western Amiraute, which was clean, modern and not too expensive. It also has a secure garage.

The WRC stopped going to Corsica in 2010, but last year the IRC took up the reins and the percussive explosions of S2000 rally cars will be there again this year on May 11-12. Even when the rally itself isn’t in town, you can still find the scars and graffiti on the roads used for the stages. Also look out for bullet holes in the French road signs – not everyone on the island wants to be under French rule…

The MICHELIN Primacy 3 ZP tyre is approved for the Mini Cooper S, a hot hatch with a strong rallying lineage and our suggestion for the Tour de Corse. A great all-rounder, the Primacy 3 provides excellent dry handling and for when the roads are wet, excellence in braking and cornering. Claims which were affirmed in independent tests by industry experts TUV SUD. “ZP” or “Zero Pressure” is the next generation of run-flat tyre from Michelin which offers the benefits of a run-flat system but with improved grip and handling, as well as enhanced ride comfort. The tyre’s reinforced sidewalls allow you to keep driving for up to 50 miles and at speeds up to 50mph when the tyre is flat- something that could come in handy on Corsica’s occasionally rock-strewn roads.