The groundbreaking new Formula E electric car race series charges off on September 13, and Michelin is just one of the established motorsport names to have signed up as a key player as the action takes shape 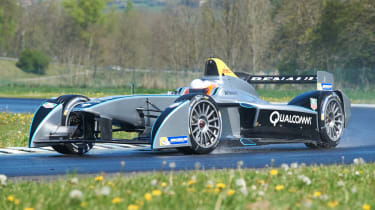 When the lights turn from red to green in China this September, 10 teams, 20 drivers and 40 identical Michelin-shod Spark-Renault SRT_01E Formula E cars will launch a vision for the future of top-level motorsport.

Formula E is the new FIA championship featuring single-seater cars powered exclusively by electric energy. It challenges the idea that the thrill of racing – as a driver or a spectator – can only be realised at a cost to the planet’s resources and climate, simultaneously setting the scene for a new era of sustainability in cutting-edge motorsport and acting as a fast-rolling R&D test bed for electric vehicle technology. Designed to attract a new generation of motorsport fans, Formula E is also destined to boost the appeal of electric cars for the road which, in turn, will have positive environmental repercussions for decades to come.

September 13, Beijing. Forty electric racing cars line up on the grid at the inaugural Formula E Championship race. The season of zero emissions competition will visit a further nine of the world's leading cities - including Berlin, Buenos Aires and Monte Carlo – and culminate 287 days later with a final race in the heart of London, on June 27, 2015.

The cityscapes may change, but one thing will remain the same. Every team will be using identical Pilot Sport EV tyres specifically developed for the championship by Michelin. A key element of the series concept, the tyres are designed to work optimally in dry or wet weather conditions and incorporate advanced technologies that will almost certainly be used in future Michelin tyres for road cars.

Michelin’s motorsport director, Pascal Couasnon, sees a natural connection: ‘This new championship has a city-centre setting and a format that will put us in touch with the urban audience. With the E-village [hosting simulators, plus big screens to show race coverage] being set up beside these street circuits, this new audience will provide many opportunities to achieve a better understanding of the role tyres play in sustainable mobility.’

Running the races in city centres is key, as urban streets are seen as the natural environment for electric cars. Along with ‘fan boost’ and the specially composed music that will accompany the races – at a relatively quiet 80 decibels, Formula E’s unique noise can accommodate an additional soundtrack played through a PA system to score the action – the new championship is very much geared to attracting new and younger people more accustomed to the workings of social media than a Formula One petrol engine.

A breath of fresh air for everyone involved, from the FIA to the constantly growing fan base around the world, Formula E is about new sights, new sounds and a new way to race.

For the inaugural season, each team will run four strikingly graceful Spark-Renaults from Spark Racing Technologies. The chassis has been designed by Dallara, with an electric motor developed by McLaren (the same as that used in its P1 supercar), a battery system supplied by Williams F1, with Michelin the official tyre supplier. Sounding not unlike low- flying jets, the lithium-ion batteries and electric motors will deliver 180bhp but with 270bhp available in short bursts for overtaking. Which drivers get to use this, however, is determined by their popularity as judged by the public. The three drivers amassing the most social media votes before a race are permitted the 2.5 second ‘fan boost’ that increases the power of their car by 50 per cent. The drivers call it ‘push to pass’.

The cars and teams are based at a purpose- built central HQ and workshop at Donington Park. From season two, however, Formula E will become an ‘open championship’, allowing teams to design and develop their own cars - within the boundaries of the FIA’s technical specifications - and strive for an advantage through their electrical energy innovations in a competitive, racing environment.

The city centre race circuits are around 1.5 to 2 miles long and are sure to add to the excitement generated by 20 single-seater Formula E cars capable of 140mph and accelerating to 60mph in just 3 seconds dicing for position. Ten two-car teams will compete in the hour-long races, with drivers changing cars rather than batteries during the single pit stop. The charging generators will be powered by renewable fuel.

On the day of the race, a free practice session in the early morning is followed by qualifying, which consists of one timed lap for both drivers with both cars A and B. In the afternoon there’s a two-hour break to recharge the cars, with the final race taking place in the evening.

The one pit stop happens when the battery of the car that starts the race runs down and the driver swaps to a new, fully charged car. Points are awarded to the top 10 finishers in accordance with other FIA championships: 25,18,15,12,10,8,6,4,2,1.

A championship for the real world.

Formula E represents a step change for motorsport. The world’s first fully-electric racing series anticipates a 25-year legacy that will result in an additional 77 million electric vehicles being sold, the creation of 42,000 permanent jobs, savings of 35 billion euros in healthcare costs due to reduced pollution and a 900-million-tonne reduction in CO2 output.

Michelin’s bid to become Formula E’s sole tyre partner was founded on its impressive record in endurance racing, where the challenges of longevity and efficiency are much more ‘real world’ and, therefore, closely aligned with the aims of Formula E.

Michelin’s motorsport director, Pascal Couasnon: ‘Motorsports in general and Formula E in particular serve as real-life laboratories which encourage all the players to bring an innovative approach to the table.

‘Formula E will not only help us to make tyres specifically for electric vehicles, but it will also help us to improve all of our tyres in terms of their energy efficiency. It’s this kind of information that we will harvest from our involvement with Formula E. The new technologies that flow from there will benefit the entire Michelin product line.’

Some of the names we recognise, some we’ll come to know. But there can be no doubting the support and goodwill behind Formula E. With the likes of Alain Prost and Sir Frank Williams backing the new series and F1 stars Jarno Trulli, Bruno Senna and Nick Heidfeld among the drivers, there’s a clear transitional path from the established to the new. F1 legend Emerson Fittipaldi has called Formula E a ‘new era for motor racing’. Approved by world motorsport’s governing body, the FIA, and with investments from stars including Leonardo DiCaprio and major carmakers ranging from Audi and Renault to Indian giant Mahindra, the new racing formula has hit the ground running.

As part of a joint venture with Venturi Automobiles, movie star DiCaprio is the co- founder of the new Venturi Grand Prix Formula E Team. ‘The future of our planet depends on our ability to embrace fuel-efficient, clean- energy vehicles,’ he has said.

And Formula E CEO Alejandro Agag predicts that the inclusion of high profile environmental campaigners like DiCaprio will help the new series be a success. ‘Having people like Leo DiCaprio and Virgin’s Richard Branson - global ambassadors for the environment - is a privilege for our Championship and will greatly help us to spread the use of electric cars in cities around the planet.’ The charge begins in China on September 13.