When it’s not closed for the Isle of Man TT motorcycle races, this fantastic road is a public highway – and there’s no speed limit 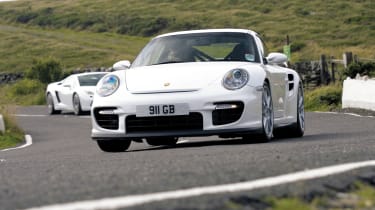 Stuck out in the wilds of the Irish Sea, the Isle of Man is a curious place. Self-governing and sitting outside the UK, it is known for a number of things – cats, Mark Cavendish, three-legged symbols – but evo generally travels there for two particular reasons: the TT motorbike races held every May/June and the complete lack of speed limits on certain roads.

There are lots of excellent sections of tarmac (the Manx Rally covers a high proportion) but the most famous and arguably best is the A18 Mountain Road from Ramsey to Douglas across Snaefell. It’s part of the TT course and up here you can certainly enjoy the lack of speed limits, because with long straights and big ballsy corners you’ll find yourself well into three-figure speeds once you know where it goes.

It really is a road, though. Most of the year you will have traffic coming in the other direction and if you get it wrong then you’ll be getting intimate with moorland or a stone wall, or both, very quickly indeed, so don’t get giddy and carried away.

It all starts in the town of Ramsey, where the famous Ramsey Hairpin marks the beginning of the Mountain Road. From here you go past the derestriction sign and snake uphill between hedges towards the popular TT viewing spot on a 90-degree right-hander called Gooseneck. After this, the hedges disappear and your horizons broaden.

The pace really picks up now, the next marker being the bright, whitewashed walls with yellow and black stripes at the S-bend of Guthrie’s Memorial. Then it’s on to the straight section of the Mountain Mile (actually just over a mile) before the Verandah’s triumvirate of right-handers leads into the Bungalow, with its tramlines and footbridge.

Next it’s up Hailwood’s Rise to Brandywell (the highest point at 1400ft) and the wide expanse of Windy Corner. The change in road surface to Shellgrip marks out Kate’s Cottage, which is followed by the long downhill straight to the pub at Creg-ny-Baa. From here you’re back between hedges as you head towards Brandish and then into the outskirts of the island’s capital, Douglas.

If you want to take your own car, then it’s the ferry from Heysham or Liverpool. Go to www.steam-packet.com. If you want to fly, then Flybe.com takes off from a wealth of airports around the UK and you can hire a car when you get there.

If you want to go whilst the TT is on (and you really should go and watch the bikes at least once) then you need to book well in advance. If you do leave it late, then you might find a bed through the Homestay scheme, where islanders throw open their doors as impromptu B&Bs during the TT. Go to www.visitisleofman.com

As with all mountains, the weather can be atrocious (even when it’s sunny in Ramsey and Douglas). If you go during the TT fortnight, this section of road is often made one-way, which is fantastic, but it is still a public road and you will also have to be unbelievably careful of the hoards of motorcyclists. The two-wheelers range in speed from practising racers to meandering tourists. Also be aware that where there are speed limits, the police enforce them heavily.

The 3.6 litre Porsche 997 GT2 RS offers twin turbocharged performance with bhp north of 600hp and a well-balanced chassis to match. A short-throw manual gearbox enhances driver interaction and this is an ideal car to make the most of the Isle of Man’s dynamic straights and challenging bends.

Laying down all that power requires a set of boots to match, and Porsche owners will be pleased to learn that Michelin now offer their new Pilot Sport CUP2 tyre, N rated for Porsche in front  245/35/ZR19 and rear 325/30/ZR19 sizes. The CUP2’s are road legal, but developed for the track. With 20% deeper treads and the use of Bi-Compound Technology, they provide 50% more laps and are faster when compared with their predecessors, the acclaimed Pilot Sport Cup+. They also reduce the likelihood of aquaplaning should the weather take a turn for the worse.  Now establishing itself as the go-to tyre for setting records at the Nurburgring (read Porsche 918 Spyder, Megane 275 Trophy R and Seat 280 Leon Cupra) you can be assured you’re fully set for a memorable road journey!