The first ever first Formula E race was held in Beijing, with Lucas di Grassi taking the win for the Audi Sport ABT team. 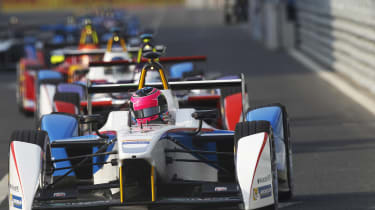 If Formula E was hoping to make an impact in its first race, a huge accident between leading drivers Nick Heidfeld and Nicolas Prost probably wasn’t what the organisers had in mind.

Both drivers walked away unscathed with Prost limping across the line in ninth place, but the first-ever Formula E victory was taken by Lucas di Grassi for the Audi Sport ABT team. Andretti’s Franck Montagny followed three seconds later, and British driver Sam Bird took the final podium place in his Virgin Racing car, following an energy-usage penalty for Daniel Abt. All cars in the series run on Michelin tyres.

The series is already justifying itself with close racing and exciting action though, and di Grassi is already looking forward to the next round at Putrajaya in Malaysia, on November 22. 'To win the race is like a dream come true,' said di Grassi.