Michelin - We Are Racers: 90 seconds in the mind of a racer

With 17 consecutive wins at Le Mans, Michelin knows a thing or two about the intense racing at La Sarthe 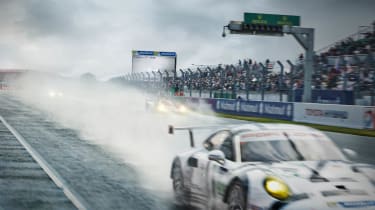 The FIA World Endurance Championship seems to become ever more appealing, thanks to the increasingly close pack of front-running cars and the exciting racing that ensues.

With action like that seen at the most recent round at Circuit of the Americas, or the previous event – the famous 24 Hours of Le Mans – it isn’t hard to see why. Le Mans in particular has allure like few other motorsport events in the world.

The cars are technologically advanced, yet spectacular to watch. The drivers are celebrities, but not inaccessible. The racing? Le Mans may be 24 hours of endurance, but it’s also a flat-out sprint. Through the night, and out the other side, with most of the morning still to go.

The Michelin rubber used at Le Mans – and throughout the FIA WEC – allows drivers to push for entire stints with little loss in performance. For the spectator on the sidelines – watching cars pass lap after lap at the Porsche Curves or over the kerbs at Tertre Rouge – there’s no loss in excitement, either.