Used during the glory days of the Mille Miglia, the Futa and Raticosa passes in Italy offer some of the most stunning driving roads 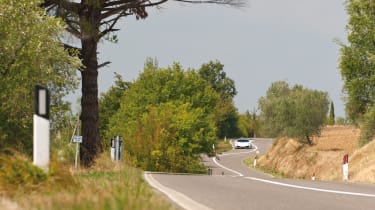 Stirling moss and Denis Jenkinson, faces covered in grime, are two-thirds of the way through their record-breaking 1955 Mille Miglia run. Their Mercedes 300SLR, number 722, is showing the miles after a couple of minor mishaps but Moss is still flat out. Jenks notices Stirling glancing at his watch as they begin the Passo della Futa early in the afternoon, and knowing that Moss wants to do the next section inside the hour, he rubs his hands with glee at the thought of seeing Moss in full flight. Stirling would later note in his diary that they in fact took 61 minutes to complete the section. He also recalls seeing Jenks’ glee: ‘I thought, “Kee-rist!” I’d just been flat-out for about six hours and here was this wonderful little nutcase, wanting to see me go harder still!’

If you’ve never read Denis Jenkinson’s account of the 1955 Mille Miglia, read it. It is possibly the greatest piece of motoring journalism ever and will undoubtedly inspire you to go to Italy if you’ve never been. The Futa and Raticosa passes are the only real stretches of the Mille Miglia that you can still drive as they were in 1955 and they are magnificent. The road, SP65, incessantly twists and turns north from Florence to Bologna, running across the Apennines from Tuscany to Emilia-Romagna and supercar country.

Moss didn’t have much time to look at the views, but they are most definitely there; not craggily mountainous like the Alps or Dolomites, but beautiful nonetheless. Numerous evo photo shoots have been carried out on the Raticosa over the years, and also on the SP58, which spears off east at the Chalet Raticosa junction. Having a supercar to pilot over the passes is undoubtedly preferred, but there are so many tight corners that anything will do. Last time I was there, in a Gallardo LP550-2, we followed a tired-looking ’80s Fiat Panda for miles, being driven on its door handles and picking perfect lines. It looked like an absolute hoot.

I recommend Florence with all its wonderful Renaissance architecture. If you would prefer to be out of the hustle and bustle of the city then try Fiesole on the northern outskirts, which has stunning views of the city and its famous Duomo, particularly at sunset. If you’re on a really tight budget then try the Villa Europa Camerata, which is a spectacular 15th-century hostel with double rooms from less than €30.

As you’re in the area, it would be rude not to go and visit the Lamborghini, Ferrari and Pagani factories. If you like motorbikes, the Ducati factory in Bologna also does tours four times each weekday, while the museum is still open on Saturdays. The spectacular Mugello circuit is at the other end of the route.

What better to tackle the Italian mountain passes than the supercar from Sant'Agata Bolognese, the Lamborghini Gallardo? Lamborghini’s most successful model provides a potent mid-engined V10 delivering its power, in the case of the 550, via the rear wheels. Jaw-droppingly fast, the car features an aluminium space-frame perfectly matched by the technically advanced Michelin Pilot Super Sport tyres. Born from endurance racing – the World Endurance Series that includes the famous Le Mans race – the Pilot Super Sport features Dual-Compound Technology and a variable tension aramid and nylon belt. Together they provide predictable handling at speed and excellent cornering grip, whether in the wet or the dry. From S-bends on the race-track to driving the twisting mountain roads at speed, it quickly becomes apparent that this particular tyre is a perfect example of Michelin’s “track to street” ethos.