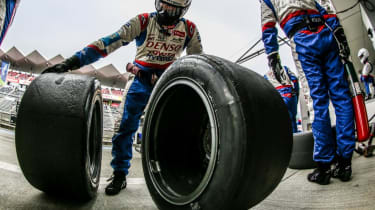 The relationship with the tyre engineers is incredibly important. Because they work with the entire field of LMP1 cars, Michelin has extensive knowledge of all of the teams and what they’re doing. That doesn’t mean they’re sharing it with us however, they don’t give away any information to competitors or any hints as to what they’re up to. In that respect the engineers are ultra professional and us drivers know the limits of what we can or can’t ask them. That secrecy is paramount for Michelin and we really feel it. I felt it in my F1 days, I feel it now.

The relationship you have with your own individual tyre engineer is therefore crucial. It’s especially crucial in winter testing to make sure you choose the right tyres for the different tracks you race on throughout the year. The tyres we had at the last race in Fuji for example, were chosen as early as in March winter testing. As a result it’s a tense time in the winter, because you know the impact it’ll have on your entire championship campaign.

With this in mind, being on the same wavelength as your tyre engineer is vital, and I genuinely enjoy that aspect of the work. It reminds me of my testing days in F1 during the tyre-war of the early 21st Century where competition was so high the attention to detail was astounding. What we have now is not too dissimilar, because all running similar tyres means even the smallest gains are crucial to success.

The great thing is that my current tyre engineer is the same engineer I worked with at Peugeot before joining Toyota. I was really happy to learn my engineer was the same as the Peugeot days; it meant we could pretty much start where we left off.

Thankfully, I can also fall back on my wealth of F1 testing experience from the most ferocious tyre war in the sport’s history. It was serious work and serious money was thrown at it. We had multiple days where we would use up to 10 sets of brand new tyres in one day at any given circuit, it was that intense.

As a driver, the more you understand tyres, the more you’ll get out of them. The better your laptimes will be too, especially in endurance racing where prolonging tyre life is crucial. There are no limits to the amount we can learn with regards to what a piece of rubber does on a piece of asphalt; even the best brains in the world are still trying to fathom what happens in all the different types of scenarios.

As drivers we have to understand different surfaces of tracks, the difference between compounds, constructions of tyre, the graining processes and phases, tyre pressures and the effects they have on balance and degradation, as well as safety margins.

Sometimes it gets really complicated too. When we arrived in Fuji for example, we were faced with a low grip surface because the track was very green as it hadn’t been run on for a long time.

Tyres are designed to run on their own rubber, so if you take a tyre to a green track, the chance of them overheating – through sliding on the surface too much – is very high. You can suffer increased rates of degradation compared to a nicely rubbered in track.

All of this can affect the balance of your car and it’ll certainly affect laptimes, so being able to put your finger on where the track’s levels of grip is at the start of the weekend is vital. Falling back on your knowledge, and not making too many drastic changes to your car through letting the circuit come to you, it’s sometimes what it’s all about.

That’s why in F1 you see the more experienced drivers like Jenson Button making the right call on tyres; it’s not a fluke, it’s experience. It’s falling back on that knowledge he’s developed from driving karts as an eight-year-old kid to the stage he’s in now that enables him to foresee how the track conditions will evolve, allowing him to make decisions before other racers.

When it comes to tyres, the more you know, the faster you’ll go.