My evo Year: Anthony Davidson - Overview of the WEC race at Fuji, Japan 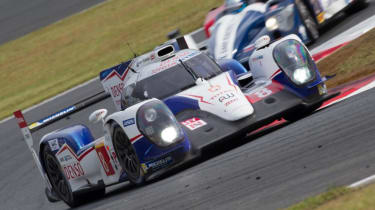 Ahead of the race weekend, we were optimistic. We were surprised by our pace in Austin as last year it was Audi’s strongest circuit, so rolling on to Fuji we had lots of hope for a good result.

After initial running we did feel a little more nervous however. We always seemed to have a very good race car, as it was very kind on its Michelins through the long stints in practice. But we had to work hard to improve our short run performance for qualifying.

Even with the nerves, we just about snuck in pole after a good fight against Porsche. They looked like they had it for some time, but we got there in the end and earned a valuable point for the Championship. Over a six-hour race normally it’s less important to grab pole, but now with the point there’s a real motivation to go for it.

For the race we remained mildly confident, making quite a conservative choice for the tyres that meant that they lasted pretty well even towards the end of the stint. We did suffer slightly poor warm up with the tyres as a result, which made qualifying difficult, but in the race it paid dividends for longevity.

We did think about doing the double stint on the tyres but it would have taken too much management, plus we would have lost out in terms of strategy by driving well within the tyre.

It was actually beneficial to drive flat out in a single stint and change tyres each stop. Porsche and Audi both tried the double and were unable to make it work. I’m fairly sure we could have done it, but with the pace we had in the car compared to others, it wasn’t worth the risk.

Up next is Shanghai and that’s been a good hunting ground for us at Toyota. It’s a track that rewards high downforce and it’s very aggressive on tyre wear, so things look good for us, but you never know.

We had a good fight last year with Audi and they’re our main contenders for the championship. But we can’t forget that last year we had a suspension failure that put us out of the race from the lead, so you never know in motorsport. Whilst things look good, anything can happen.

Anthony and teammate Sebastien Buemi lead the World Endurance Championship by 126 points with three races to go. You can next catch Anthony on track at the 6 Hours of Shanghai on 2 November.