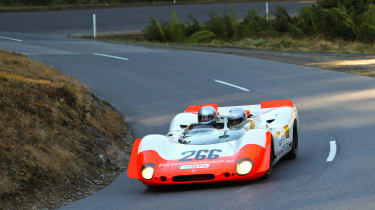 Last year saw the 20th anniversary of the legendary Targa Tasmania, an event that quite rightly employs the tagline ‘The Ultimate Tarmac Rally‘. The concept of utilising Tasmania’s fabulous public roads as a showcase for great cars and drivers was hatched when John Large, then president of CAMS (Australian motorsport’s governing body), met journalist Max Stahl. Large wanted a headline motoring event for Tasmania; Stahl had visions of a classic Italian-style road race. Targa was the result.

These days Targa runs over six days and regularly attracts more than 300 entrants in anything from 1930s Dodges to the latest Lamborghini Gallardo Superleggeras, and its honour roll includes Stirling Moss, Jack Brabham, Walter Röhrl and Bob Wolleck. Following in their wheel-tracks is no hard task, for the roads used at Targa are easily accessible – you just have to get there first!

Targa’s North East Loop is traditionally tackled on day two, and is revered for its challenging combination of twisting tarmac and tight stage times. From Launceston – the main base for Targa – the A3 takes you east towards St Helens, and after about 35km (22 miles) transforms into the roller-coaster known as ‘The Sideling’ – the loop’s most famous stage.

This is a pugnacious road; its signature tightening-left into uphill-right (mind the camber change) sequences dominating the early reaches before the road climbs, morphing into a long, well-sighted straight across the peak of a mountain, with a great lookout if you care to stop, before cascading down the other side.

After a quick detour through Legerwood (a fast stage through pastureland) the route rejoins the A3 to St Helens, running alongside pristine surf beaches before switching to the A4 for the inland return over the Elephant Saddle.

The last competitive stage of the loop is completed through Longford. The Country Club Hotel in the town centre is a must-visit for scholars of open-wheel racing history for its large collection of memorabilia.

The best option for overseas visitors is to catch a long-haul flight to Melbourne, on Australia’s mainland. From there it’s a 50-minute connection to Launceston, where you can pick up a hire car at the airport.

Alternatively you can board the Spirit of Tasmania cruise ship, which sails from Melbourne to Devonport on Tassie’s northern coast. It’s a nine-hour-plus journey.

Launceston’s Country Club is the official start point for Targa and offers a range of clean, modern rooms and a wealth of facilities, including a golf course, five restaurants and a casino. For those wishing to make the North East Loop a two-day affair, we’d recommend an overnight stop at St Helens, where you can enjoy freshly caught fish for dinner while taking in the shimmering emerald coastline.

If you’re planning to visit in April or May, check the official website of the Targa Tasmania (www.targa.org.au) for details of road closures for the race. When you’re there, remember that Tasmania’s vast wilderness teems with wildlife, so always allow a safety margin, particularly when driving at dusk or where forward vision is restricted.

What better way to tackle the Targa Tasmania than in a 3 times winner of the event in the last 5 years, the Nissan GT-R….well perhaps one, a Nissan GT-R specially tuned by Gloucestershire-based Litchfield Imports with over 750HP  and our choice for the 600km tarmac road course. Completing the upgrade package are Michelin Pilot Super Sport tyres- tyres which can perform on the track and which have their DNA in racing, but which really excel as a performance road tyre. The Pilot Super Sports are derived from Michelin’s involvement with high level endurance racing, most notably the Le Mans 24 Hours. From this was developed a novel way of distributing two compounds, on the outer edge is a carbon black-reinforced elastomer for hard cornering and on the inside edge is an elastomer developed for strong grip characteristics in the wet. All of this means faster speeds and harder cornering for an exhilarating driving experience, combined with safety. Swapping over to non-run flat Pilot Super Sport tyres from the OE run-flat tyre also has the benefit of improving the ride, and there are a number of size options to choose from. As company owner Iain Litchfield himself summed it up, 'As a real world road tyre they are superb.'