Jon Birch has been Porsche hunting through the Lake District on his Michelin winters. How does his GTI fare? 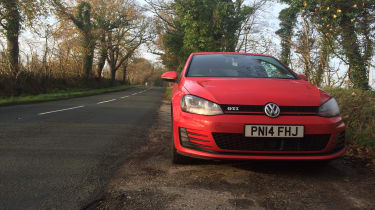 It’s been just over a week since the Michelin Pilot Alpin 4 tyres were fitted to my GTI, and in that short time I’ve racked up 500 miles. I’ve used the car for work, the general day to day duties and a weekend trip up North to the Lake District to celebrate my wife and her twin sister’s birthday. Soon after fitting I noticed a subtle difference in the dynamics of the car, as detailed in the last report, but now they’ve settled in I’ve found that they contribute to a more polished overall driving experience than the scrappy - struggle-for-grip even in the dry - experience offered by the standard fit summer tyres.

Driving up from Manchester to the Lake District showed that tyre noise is greatly reduced making for a much more relaxing cruise. The GTI’s standard Adaptive Cruise Control and very comfortable heated seats made light of the drab motorway schlep. However, it would have been more comfortable if we were in a boat as the weather could only be described as a torrential monsoon. Visibility was greatly reduced and there was lots of standing water all over the road. The tyres cut through the mini-lakes with ease and the car felt like it was really on my side. It felt very planted which is more than can be said of the 997.2 Porsche 911 Carrera 2S I was in convoy with!

After leaving the motorway we decided that rather than sitting in traffic between Windermere and Ambleside, we would take the long way round and sample some of the B-Roads, eventually ending up on the Kirkstone Pass for a short while before working our way down into Grasmere. I was following the Porsche and on those types of roads it certainly looked a lot of fun, wagging its tail out of the slower corners, sports exhaust howling and bouncing around the mountainous Lake District countryside. 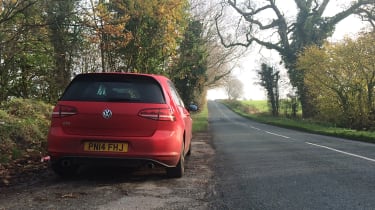 I did find it quite hard work to keep up, mainly due to the Pilot Alpins relinquishing their grip on the surface during the turn-in phase of corners in anything other than slow, second gear hairpins. They don’t particularly like fast direction changes – neither did my Wife! – and the front does push wide, more so than the summer rubber the car came with. The answer is to adapt and use the ‘very’ slow in/fast out method, by which time the 911 was half way to the next corner, that rear end traction firing it up the road!

That said, the high speed, numb front end response is the only drawback I’ve found with the winters so far. In every other aspect they offer a nicer driving experience than the summer rubber, which in itself has been the biggest surprise of the test so far as I’d expected them to completely mute the feel and response of every aspect of the dynamics. The damping on the Golf GTI already feels superb, but the Michelins have added another level of suppleness to the response, rounding off all but the most severe imperfections the road surface throws up.

On the whole, the GTI is a wonderful long-term companion which is showing a greater depth of ability the more I drive it. The Michelin winters are enhancing the experience more so than I imagined they would, and now I’m seriously considering ditching the factory-fit summer rubber all together in favour of Michelin Pilot Sport 3’s for the warmer months.

In the next article I’ll cover my trip to the Wales Rally GB with my 911 owning friend. He had a go in the GTI himself and let me know his thoughts on how the tyres are altering the performance of the car. I’ll report back to you next week…