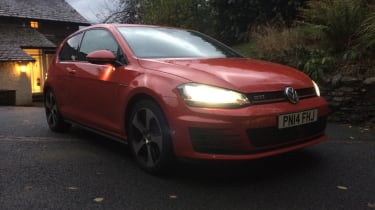 Temperatures are starting to plummet so it should finally be a good test for the Michelin Pilot Alpin 4 tyres fitted to the GTI. The weather has been milder than we all expected until recently, but with early morning frost setting in and Christmas very much upon us, the mornings are more frequently beginning with the dreaded de-icing of cars. That said, if last year is anything to go by, we didn’t see too much of a winter until the new year, but I’m expecting the tyres to perform well on my B-Road commute where I have to contend with very greasy roads thanks to the farmers spreading thick mud after they’ve driven out of the fields.

It’s also a milestone in my ownership as I’m about to power through the 10,000 mile marker, so I thought I’d take a look back over the last nine months of GTI ownership, thinking about my highlights, and questioning any aspects where the car has fallen short of my expectation.

Starting from the beginning, the collection of the car was a great experience. The Volkswagen dealer I ordered the car from did make it very special by covering the car up under a blue sheet and ‘presenting’ me with the it in a designated area of the showroom. I’d waited six months for it and this made the wait very worthwhile.

I know people often say it's not necessary these days, but I did run the car in for the first 1000 miles and I was very surprised at the kind of progress you can make using only the first 4,000rpm. The torque of the engine coupled with the revised DSG gearbox makes for effortless progress. That said, once run in the engine revs out very sweetly, much more so than my old MK5 GTI did.

As an every day car, it’s been a brilliant companion. It’s so comfortable, the ride puts my wife’s BMW 1-series M-Sport to shame and it feels like some very expensive damping with excellent calibration on my Adaptive Chassis equipped car. The quality of the interior with the bright red lights acting as accents in the door trim, the tartan cloth and that lovely steering wheel, coupled with the angled centre console makes it feel like a premium cabin, much more so than what you might expect for a £25,000 hatchback.

The only mishap I've experienced so far was when the driver of an old Yaris got confused with which side of the road she should have been using and took my drivers wing mirror clean off. It also required the door to be painted which means although the repair is good, it’s not quite the same as the factory finish. Not only that, but the insurance repair company damaged one of the lovely diamond-cut alloys so it’s had to have a new one to keep it in factory fresh condition.

Even at such an early stage in my ownership, I’m thinking about what I could replace the car with and it’s a really difficult one. When I’m ready to change it in another 2-years time I’ll need something more family orientated, but until then, the GTI offers so much all of the time that it’s really difficult to think what will fill its space in the driveway.