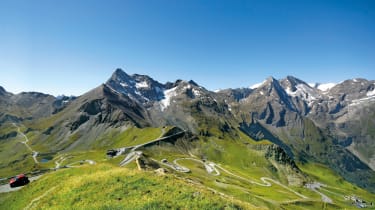 The route: B107 south to the Grossglockner

Great for: a Porsche. If you're taking the family, how about a Cayenne Turbo S?

If you’ve never been to Austria, then you’re missing out. The strudel is excellent. Some of the most amazing roads evo has ever been to are nestled amongst the Austrian Alps too, and one of the most famous stretches of tarmac wanders its way back and forth in the shadow of Austria’s highest mountain, the 3798m Grossglockner.

The Grossglockner High Alpine Road (to give it its full title) stretches over 28 miles and 36 hairpins, and reaches a height of 2504m above sea level. The road’s first milestone is actually in the centre of a town called Bruck, but the toll barrier is just past Fusch, from whence you’ll ascend through flower meadows and pasture. The road is wide and well maintained, and the relatively shallow gradients mean that it’s a good choice for older cars. As well as looking up at the peaks of the mountains, it’s also worth looking down at Austria’s longest glacier, the Pasterze, which stretches along the valley floor beneath the peaks. 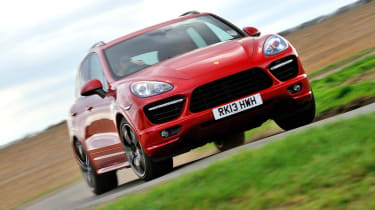 The road was built in the 1930s, and in the ’40s Porsche test drivers used it to get from the family estate in Zell am See to the converted sawmill in Gmund that was used as the first factory. Legend has it that while testing an early 356 prototype there, the young Ferry Porsche nearly came to grief when the car’s frame buckled, part-collapsing the rear torsion bar housing. Ferry simply effected a repair using two pieces of scrap iron from an amenable road worker and carried on. At full speed.

Apparently Porsche also did a lot of testing at night, which sadly wouldn’t be possible now because the pass is a toll road that is closed every evening when it gets dark. It is actually part of a group of spectacular toll roads including the nearby Nockalmstrasse, which we drove in evo 179, so it’s well worth exploring the whole area while you’re there. 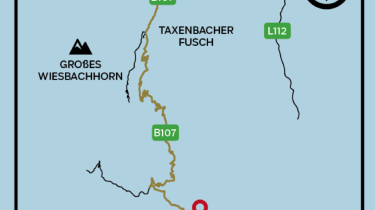 Marmots and ibex should be top of your ‘I Spy Wildlife’ list. Also be aware that the Grossglockner can get busy in the height of summer as tourists flock there. The road only generally opens at the beginning of May because it takes 25 days to clear the snow. That’s better than it used to be, though – in 1936 it took 350 men with shovels 70 days to clear just one lane.

A Porsche Cayenne Turbo S might not seem like the conventional choice for a winding mountain pass, but as our latest tests confirm, it’s one of the best all-rounders on the market. For that reason (and also because it’s the best Porsche to squeeze a holiday’s worth of luggage in), Michelin suggests taking the super-SUV to the Grossglockner.

With 542bhp ready to be unleashed into the mountains, Michelin’s Latitude Sport 3 tyre would be the boots of choice. Developed in close partnership with Porsche, the tyre is amongst the most effective in both wet and dry conditions.

Confirmation of this comes thanks to a 2.7-metre shorter braking distance than its predecessor in official stop tests, emphasising the strengths of a central rib construction and an advanced tread compound.

Void ratio has grown by 10 per cent too, enabling greater water displacement and earning almost all sizes of the Latitude Sport 3 tyre an A rating for wet braking. So, if things get a bit slippy on Grossglockner, the Latitude Sport 3 will be best set to handle the mighty Cayenne’s power.