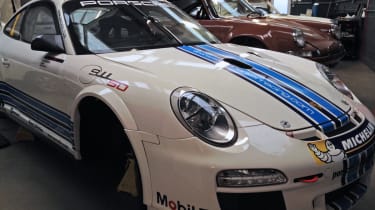 Where does the journey from GT3 Cup to R-GT start?

GM: It starts with lots of measuring and sketching. We carefully examine what we’re starting with, what we want to change and what the space allows us to do within the regulations. 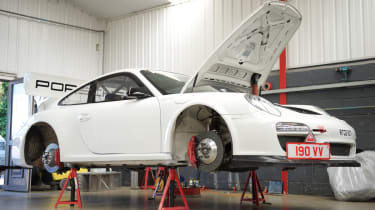 How much must be changed in the transition from race car to rally car?

GM: GT circuit racers have a single occupant and are close to their garages most of the time. Rally cars need things like a co-driver’s working environment, the capacity to carry spare wheels and very different suspension. We remove things like the air jack system, which is not practical on a rally car.

Where do the FIA R-GT regulations start to make their presence felt?

GM: The regulations include safety items, such as minimum distance of the roll cage from the occupants, and specify areas we cannot change, such as standard suspension pick-up points. Once we’ve integrated the regulations into our initial technical concept, we can draw up a detailed plan and start building the car.

Do the rules differ between WRC and R-GT cars?

GM: WRC cars are the ultimate package of speed and technical complexity, whereas R-GT cars are intended to be pure driving fun. R-GT regulations keep the basic build costs under control, but regulations do not extend to all components: these are known as ‘free’ parts. Dampers are free, as are many parts of the braking system. We are also free to use much wider tyres than WRC cars, subject to their homologation for R-GT use.

Tell us more about tyres and the Tuthill Porsche 997 R-GT car?

GM: Early Porsche 911s took many rally wins thanks to great traction from a drivetrain mounted over the driven rear wheels. R-GT is a 2wd car, so using the best tyres maximises that traction. We’re delighted to have Michelin as our WRC tyre partner as they offer a range of tread widths, and wider tyres can make a big difference in the right conditions. Not just at the driven wheels, but also at the front: so many drivers tell us that turn-in on our R-GT car is much more positive than they were expecting from a 911. 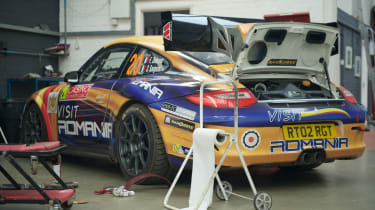 How has development progressed since the R-GT project started?

GM: A big part of our challenge is keeping the chassis at maximum efficiency, whatever the terrain. Once the car was ready to run, we embarked upon a testing and development programme that has no end point. Whatever we discover, we will always want more: whether that’s power, traction, acceleration, braking, damping.

Our most recent tests in Northern Ireland and at the famous Curborough sprint circuit (see video) were further steps forward in understanding the car and how potential customers relate to it. Every mile covered gives us more data to look at. One big limit in testing is budget: keeping the development curve going while managing costs is another part of the R-GT challenge.

Next time: Tuthill prepares for a summer of Porsche competition and the awesome East African Safari Rally.