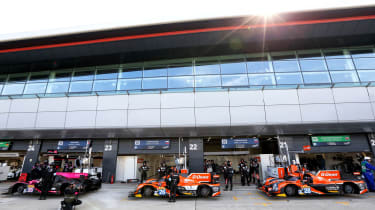 Not a single person within the team looks complacent despite G-Drive Racing holding first and second in class on the timesheets. The 90 minutes of practice is up, and the number 26 and number 28 JS P2s are being wheeled back into the garage.

Driver Sam Bird has been out of his car for a while, having finished the first practice stint and handing over to car 26 teammates Julien Canal and Roman Rusinov. He’s just finished talking to Matt; we grab him before he shoots off to the debriefing.

‘My relationship with Matt is really important; he understands the tyre better than any of us,’ Sam says. ‘He works with it day to day, so I was just trying to give him as much information about the tyre, how it’s working, what my feelings are about a stint, whether it’s progressively getting worse during a stint or whether the tyre stabilises, what the maximum grip levels are like; anything I can think of.’ 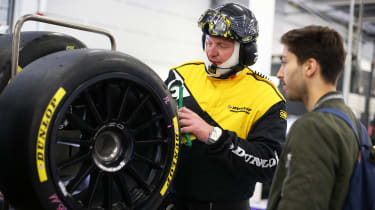 Sam and his teammates aren’t ashamed to ask for tyre advice, as evident as car 28’s Pipo Derani begins explaining his issues to Matt behind us. ‘What Matt can do is then suggest the best pressures, what kind of wear life we should expect,’ continues Sam. ‘He can even predict what will happen during the race, what we can do for tyre warm up to ease things like graining.’

So what does Sam think of Dunlop’s 2015 tyres at Silverstone so far? ‘I only did seven flying laps, but I was quite happy with the tyre. I expected there to be more cold graining on the front left, but the tyre held up pretty well.’

‘We had some other issues that were to do with the chassis, but we’ve fixed them now. We’re raring to go for the rest of the weekend.’

G-Drive Racing will run in one more practice session today. Free Practice 3 follows on Saturday morning, with Qualifying later in the day. We’ll return to Silverstone to catch up with the team on Sunday.