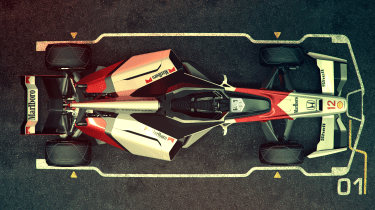 There are few racing car liveries more iconic than that of the McLaren Honda-era Marlboro cars. The white and red cars of Prost and Senna delivered some of the most exciting racing the sport has ever seen, cementing both the drivers and the cars in the motorsport history books.

The 1988 MP4/4 in particular, which recorded an incredible 15 wins out of 16 races, remains a true icon of the sport. It's also the car that digital artist Nathan Dearsley chose as the basis for the set of images you see here. Designed as a complete re-imagining of the McLaren Honda era car, but for the future, it shows what could become if that era of car was running in 2056.

"Since as long as I can remember it's the red and white of the McLaren and the Senna and Prost battles that got me into F1, I finally found some time and did something about it" explains Dearsley. "The inspiration came from various angles, movies like Tron and other elements of the science fiction world." 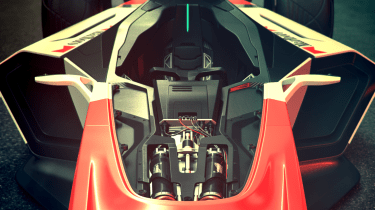 "I appreciate the old MP4/4s a lot but I wanted to take inspiration from an era of F1 even further back. The F1 cars of the 60's had everything on show, you could see the suspension working, and the exposed engine. Everything was out in the open and there was no hiding anything".

Dearsley's has worked extensively throughout the video games industry in creating visuals and concepts, such as the car you see here. Previous work included a recent gaming remake of the original Alien film, where he was tasked with designing interiors and exteriors for a 10 hour long game, from just the five original movie sets. He's applied similar techniques with his MP4/6P.

"It's such a technical challenge in 3D when you've got something that is so tightly packed." Dearsley said that the key to making his car look realistic was in making sure the innards of an F1 car could be realistically packed inside it. "There's even radiators inside the car, you don't see them but I needed to make sure that they would fit, or the car just wouldn't make sense". 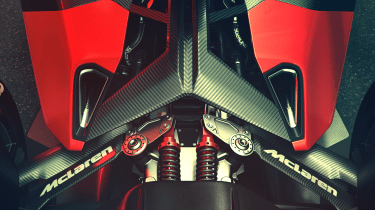 "There's a lot of points of reference pulled from modern F1 cars, suspension, that sort of thing. I essentially used that as tracing paper to design something different".

If you want to read more about Dearsley's car you can see an explanation of the concept on his blog here.