Ask Goodwin - would you buy a diesel engined car?

Diesel has become a dirtier word than usual recently. Would Colin Goodwin own a car fueled by the stuff? 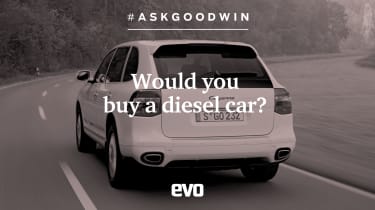 Would you buy a diesel car? - Michael Turner, Oxford

A question clearly prompted by the VW debacle. I’ve only ever owned one diesel car – an F-Reg Citroen BX estate. In red. I only bought it because it had been an art department pool car at a magazine I worked on at the time. Being a pool car it wasn’t maintained or looked after, and therefore I got it very cheap. Which is just as well because the cam ate itself within a month. It wasn’t turbocharged, either, so it had a lack of performance and sophistication that would be unrecognisable to today’s turbocharged diesel driver.

BX aside, I have never for a moment considered a car that runs on diesel. The big problem is that I hate the smell of the stuff and in particular when it gets on your clothes. Not only that, it’s a very dangerous fuel. I am one of the few motorcyclists not to have slid off on a puddle of the stuff on a roundabout, although I did have a massive understeer moment on a petrol station forecourt and twisted my ankle.

A diesel engine, while being economical and torquey, is simply not a desirable power unit for someone who has had a lifelong passion for the internal combustion engine. Up until recently I had a petrol lawnmower for just 10 square metres of lawn. I’ve now seen reason and bought a Flymo but mowing the lawn just isn’t the same now.

Diesel engines are just about acceptable in sailing boats but not in power boats, which should either have a 150bhp Mercury 2-stroke at the stern or a big-block Chevrolet powering a stern drive.

I do admit that both the Porsche Cayenne and Range Rover V8 diesels are exceptionally refined and will save you a couple of quid in fuel, but then again you wouldn’t find me owning an SUV either.