Ask Goodwin - In what vehicle would you like to make your final journey?

You certainly wouldn't find Goodwin being laid to rest after a ride in a Mondeo... 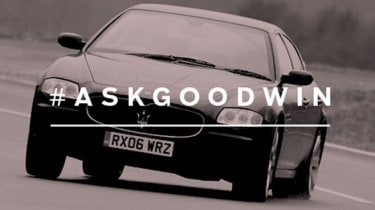 In what vehicle would you like to make your final journey? Sandra Peckett, Belfast

By final journey I presume you mean a hearse? It’s a very good question and an important one. Certainly I don’t want to begin my journey to the other side in something inappropriate and unfitting for a lifetime car enthusiast. Like a Volvo hearse. I saw a Mondeo-based casket-carrier the other day and it looked awful.

I’m glad you’ve asked me this because it gives me an opportunity to state to friends and family that I do not want to be stuffed in that motorbike and sidecar funeral wagon. It’s gimmicky and implies that I approve of motorbikes and sidecars which I don’t.

Designing a hearse is a really big challenge. Even svelte saloons like Jaguar’s XJ looks like a dog’s dinner when the tin snips and mig welder have turned it into a stiff-wagon. A friend saw a Maserati Quattoporte hearse in Naples the other day and that looked quite cool. It’d probably conk out on the way to the church and I rather like the irony of being dead in the back of a dead Maserati waiting for the AA to arrive.

I’ve had the answer all along and anyone who has seen the cult film Harold and Maude will also have reached the same conclusion. It has to be the black Jaguar E-Type hearse that Harold built from the white roadster his mother gave him. It looked fantastic, easily as stylish as anything Ian Callum has come up with (I doubt hot rod loving Ian would be too offended). What a way to go.

I’ve seen photos of a modern copy of that car but instead of carving up an E-Type a slightly cheaper XK8 was used. I’ve been told that it’s owned by Jonathan Ross’s wife. With the price of old XK8 really low, I quite fancy building one myself. It’d make a handy run-around until the grim reaper comes calling. Hopefully quite a way in the future, Sandra.