Ask Goodwin - What are your gripes about modern driving?

Nobody is beyond occasional annoyance on the road. What grinds Colin's gears? 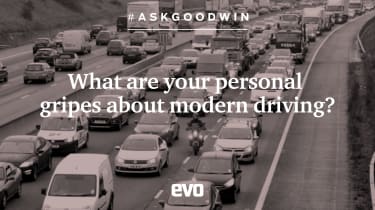 What are your personal gripes about modern driving? - Roy Limb, Liverpool

Oh, the usual things like people hogging the middle and outside lanes of motorways, and having cars hang off your bumper, but these upset most of us.

There are plenty of silly and daft things that wind me up. Such as electronic roadside information boards that often tell you absolutely nothing or something useless. What’s the point in knowing that a road outside Newcastle is blocked if you’re five hours away in Surrey (I’m exaggerating a bit but you know what I mean)? And why put a sign on a sign telling me the sign isn’t in use? Clearly it is, it’s telling me it’s not being used.

Why not tell us something useful? “Slow down, there’s a 2-litre short wheelbase 911 ahead that you should really take in and appreciate.” Or if not, put a joke up to keep people amused while queuing in traffic. There are plenty of great Tommy Cooper one-liners that would fit on a board.

Caution! Show dogs in transit! What a fatuous warning. I don’t really want to pile into the back of any car whether it has dogs aboard or not. Also, I wouldn’t want to injure an ordinary dog either, regardless if it’s beautiful or pure enough for showing.

The theory behind baby on board signs is that it alerts emergency services and members of the public to the presence of a baby in the car in the event of a crash. I would like to think the police and fire service very carefully check vehicles anyway.

Another thing that winds me up is the needless use of yellow flashing lights. It must be some sort deep-seated psychological desire to stand out. You see rescue trucks with a broken down car securely lashed on the back travelling at normal traffic speed with a bank of flashing orange lamps. Why? Flashing lights on a wide load make sense and perhaps, at a pinch, on those huge 90 tonne cranes, but even then if you can’t see one of those travelling at 30mph on a motorway you’ve got an issue with your perception of speed and distance.