Ask Goodwin - Will you be changing your old-fashioned views on motorsport?

Fighting words from a reader, who wonders if Goodwin is mired in the past with his views on modern motorsport 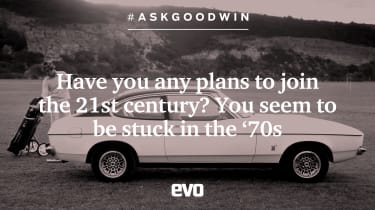 Have you any plans to join the 21st century? Judging from your views on Formula E (and F1) you seem to be stuck in the ‘70s - Jeremy Townley, Bristol

Not in the immediate future. But seriously, I might well bore the younger generation with talking about how it was when I was there age, but this is only natural. My dad was born in 1915 and used to always bang on about how there was no crime and how everything was perfect when he was young (but dad, what about the General Strike when you were eleven?). The young expect those a generation above to be on a slightly different wavelength and for us to pretend otherwise is a bit dad-dancing.

How can I sit in a roomful of young journalists and be in raptures over the news that Jaguar is entering Formula E when I remember Jaguar Group C’s days? How can I pretend that I find modern Formula One exciting when I’ve sat in the stands at Old Paddock at Brands Hatch and watched Mansell, Senna, Piquet and co braking from 170mph and turning into one of the most tricky and dramatic corners on any racetrack?

I only learned to fly ten years ago and I find the freedom that I have in the air absolutely amazing – that I can fly from Maidenhead to Spa with barely any paperwork chores – is fantastic. But the generation above me, who were flying in the ‘60s and ‘70s find today’s restricted airspace and red tape overwhelming and irritating. I have known no better and therefore remain happy and content. But that doesn’t mean that I find it boring to hear them talk about when flying was true freedom.

I was cynical about Twitter until I discovered that it was actually fun and entertaining and also very useful. Most of me is living in the 21st century, just not the bit that loves motor sport.