Before the McLaren 720S Spider arrives, we wanted to find out how the drop-top 650S fared against Ferrari’s 488 Spider 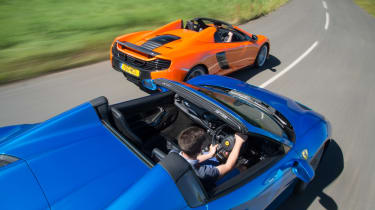 The world was a very different place when the 650S was first introduced back in 2014. Despite it offering plenty of worthy upgrades over the flawed, but still game-changing 12C, Ferrari was still very much top-dog in the realm. Fast forward to 2018, though, and things are a little different. The 720S has since changed our understanding of what is possible in a mere £200k(ish) supercar, while higher up the echelon the 675LT and now Senna stand as examples of McLaren’s progress.

So before we approach what a future 720S Spider might bring, we thought it time to see exactly where the McLaren drop-top supercar left off by comparing the previous 650S Spider and the current 488 Spider.

One of the worries we had when the Ferrari 488 picked up a turbocharged engine was a downturn in its response, a key reason the 458 was such a memorable supercar. But the moment you open the throttle for the first time with any real intent in the 488 Spider, the very notion that this new motor might be a weakness seems utterly absurd. It responds instantly and with a force that can only be described as violent. The turbocharger’s operating range appears to be from idle to red line, the lag between flexing your right ankle muscles and the engine responding close to indiscernible. This engine – forget that it has 661bhp at 8000rpm and up to 560lb ft at 3000rpm for a moment – is witchcraft: a turbocharged engine with all the benefits of forced induction but seemingly none of the drawbacks. You ask for something and it delivers as fast as you could imagine and with many multiples of the force you’d expect. Even if you’re used to very fast cars you can get lost in the 488’s lunatic delivery for at least a couple of days, giggling with every great lunge of acceleration and wondering why anybody was ever worried about the rise and rise of the turbocharger.

Certainly the 650S can’t hope to compete. It too feels madly fast and covers ground with gut-wrenching speed (was that a speed trap between those trees back there? Can I plead insanity?), but while the Ferrari is always in the right gear, always ready to give you a great surge of precisely delivered power, the 650S is easy to catch off boost and even when it’s fully alight it can’t match the fine throttle response of the 488, which makes unpicking any road in the Ferrari a fluid, seamless exercise.

Of course, the McLaren’s 3.8-litre twin-turbocharged V8 is still a huge thrill and right at the top end it has a cleaner, more frenetic feel than the 488, but by then the Ferrari is long gone. I remember vividly in the 488 GTB press presentation a Ferrari engineer describing an imaginary rolling-start drag race. The rival went unnamed but was illustrated by an orange line on an acceleration curve. Both would hit full throttle at the same time, but by the time this mystery rival came on boost the 488 would have already hit its rev limiter. I thought it was a nonsense at the time, but having driven them back-to-back it seems a highly probable scenario. Leave a village in convoy at 30mph in third gear, pin the throttle in both cars at the same time and the Ferrari simply disappears.

However, all is not lost for the 650S. The qualities of these two cars as a complete dynamic package isn’t quite so black and white as the hammer blow delivered by the Ferrari’s extraordinary engine on first acquaintance.

First, a reminder of what the 650S brings to the fight, and despite feeling half a generation behind McLaren’s rapid evolutionary process, it still arrives seriously tooled up. The engine produces 641bhp at 7250rpm and 500lb ft at 6000rpm, it weighs 1468kg and is capable of 0-62mph in 3.0sec, 124mph in just 8.6sec and can hit 207mph given the space. It’s only when you write down figures like that that you realise quite how fast even ‘normal’ supercars have become. The Ferrari has an extra 20bhp and 60lb ft, but weighs 1525kg. According to the official figure they’re inseparable at 62mph, the Ferrari is a tenth down at 124mph and it’s capable of just 203mph. Although, as we’ve already covered, the nature of how they deliver their performance is very different, making comparing tenths here and there on cars capable of hitting 100mph in less than six seconds even less relevant…

What is relevant is the McLaren’s killer advantage – the carbonfibre construction. You feel the benefits of it every second of every journey and the brilliant rigidity complements the gorgeous precision, accuracy and an all-pervading lightness of touch that characterises the Spider. The steering is light and clean, the damping has an effortless feeling to it and you have to really concentrate to feel any compromise in the structure from coupé to Spider.

However, to really enjoy the 650S you need to search around for your preferred set-up and there remain some frustrating ‘programming’ issues. For example, to actually feel the car’s true balance and make the most of its agility you must switch the ProActive Chassis Control to Track mode. This relaxes the traction control sufficiently to let you feel in control and to push through the default mild-understeer cornering attitude. In fact, it opens up a lovely ability to move the car around with the throttle… but the penalty is a much tougher ride quality. I like the added physicality and can cope with the wheels skipping over bumps at times if the payback is this increased involvement and excitement, but why the traction control isn’t independent of damper settings is beyond me. The 675LT rights this obvious wrong. It also sharpens the SSG gearbox response, adds weight and real texture to the steering and just ramps-up the drama every which way. Even if you haven’t driven the LT the overwhelming feeling with the 650S is that it still plays everything just a bit too safe.

The Ferrari rams home that conclusion. It looks wider and more aggressive, it sounds angrier and the immediacy of engine response is matched perfectly to a chassis that is just as finely adjustable and equally intoxicating. The one glaring weakness is that it still feels wobbly. The blurred rear view mirror image and jellified steering column over lumpy roads is improved over the 458-generation Spider, but such is the devastating performance and fine polish applied to the drivetrain and suspension tuning that to discover such a compromise anywhere is a shock. Surely Ferrari will be forced to adopt carbonfibre to some extent in the next-generation mid-engined chassis, especially considering McLaren uses it even in the 570S and the Huracan (and hence R8) also feels much stiffer in Spyder form.

Soon you learn to ignore the shimmies and instead revel in the sharpness, control and exuberance of the Ferrari. In fact, considering the initial shock of the acceleration it doesn’t take long to build up to the point where you’re using the engine to make the chassis work just as you want it to. It’s simply a more expressive car to drive than the McLaren and rewards application with precisely the desired effect. Sometimes it feels like whatever you do in the 650S it’ll pretty much stick to its own agenda. The Ferrari empowers you to deliver your own in spectacular style. Even without the crackling old normally-aspirated 4.5-litre V8 and with a more obviously compromised structure, it still has enough to win this test. 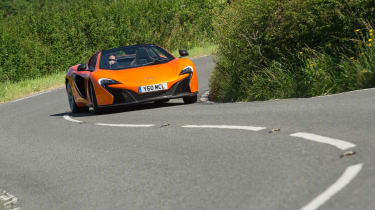 Having said that, after the initial feeling that the 488 Spider is a massive leap on in every way, soon you do begin to miss some of the old magic. That furious turbocharged engine doesn’t sparkle at the top end and its slightly softer edges make the gearshifts feel dulled and less exciting. The balance is supreme, but the roll rate front-to-rear feels slightly unnatural at times and you just feel a couple of degrees removed from the nitty gritty of the action. Commit yourself to extracting the 488’s performance and it’s a remarkable car, but it’s all too easy to find yourself short-shifting up the ’box and carrying speed but not really feeling fully engaged in what’s happening.

The McLaren 720S and Ferrari 488 Pista both proudly display the incredible progress turbocharged power units have made, even over just the last four years. Whether the next McLaren 720S Spider will take it yet one step further in a soft-top supercar is a question we very much look forward to answering.