The Lexus LFA's rev counter is one shaped directly by its engine, and it's a magnificent piece of design 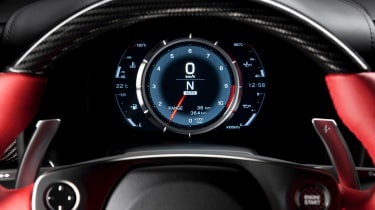 Lexus had a clear choice when it came to deciding what sort of dials and gauges the drivers of its LFA supercar should see beneath the arc of its exquisite carbonfibre steering-wheel rim: functional or fancy. Fortunately, being a Japanese company that had allotted a more or less open-ended budget and nine years of development time to the realisation of its £350,000 statement two-seater, it could choose both. And the result, for some, was as mesmerising as the sound of the LFA’s extraordinary naturally aspirated 4.8-litre V10 closing in on its 9000rpm red line.

Not even Ferrari had a road car with quite such a scintillating 9.0k soundtrack, so making it the focus of the driver’s attention was a natural starting point for chief engineer Haruhiko Tanahashi and his team. The LFA’s race car-like appetite for revs, and their rapid-fire disposal, in part informed what sort of display was needed – no conventional rev counter would be able to live with the unloaded V10’s ability to go from idle to 9000rpm in 0.6sec. The LFA’s would, and it would be at the centre of a moving stage.

> Lexus LFA: history, review and specs of an icon

Thin Film Transistor (TFT) representations of analogue dials were already commonplace in the latest generation of passenger jets, but rare in the automotive industry. Lexus could have bundled together a number of TFT screens, made them look pretty, and left it there. But the team had ambition far beyond that. With design and programming help from Gran Turismo video game wizards Polyphony Digital, it set about creating a thing of fascinating beauty, with a number of kinetic elements that looked more like cinema CGI special effects. 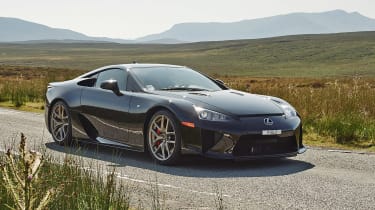 From start-up, the display appears to consist of one large rev counter with a glowing, 3D luminescence and a digital speedo and gear indicator at its centre. This is flanked by two wings of ‘virtual’ auxiliary gauges. It is a living, all-but breathing, thing. Switch through the LFA’s driving modes – from Auto, via Normal to Sport – and the display’s numbers, by stages, become bigger and bolder until, in Sport, the dial face changes from black to white and the red line moves to the top of the dial calibration. As the LCD digital needle approaches, the whole dial gets bathed in red (or yellow or green if you prefer).

Amazing enough. But cooler still is the way the big dial smoothly, electrically eases across the display area when you call up the main menu. Until someone invents a holographic head-up display, nothing beats that.