The 3599-piece, 1:8-scale LEGO Technic Bugatti Chiron is a marvel of LEGO engineering 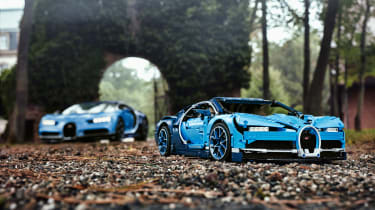 Never meet your heroes, it’s sometimes said. But what if your hero is the Bugatti Chiron? The dream car that sent evo into raptures. ‘Quite simply, nothing combines the Chiron’s civility and savagery. Its capabilities are mind-blowing, its potency almost unimaginable,’ raved veteran road tester Richard Meaden.

So, a hero very much worthy of a personal encounter. Although with a price tag of about £2.1million before local taxes, the chances of such a meeting are slim. But what about building your own Bugatti Chiron – at a fraction of the cost and an eighth of the size?

The LEGO® Technic™ Bugatti Chiron lets you build for real your very own hypercar, with the full sanction and collaboration of the iconic French marque. It’s a 1:8-scale model and a marvel of plastic engineering. It comprises 3599 pieces, and despite comprehensive and extensive instructions, constructing this Chiron is a challenge of concentration and patience: but then you wouldn’t expect – wouldn’t want – anything less from LEGO Technic. 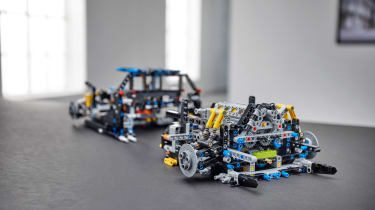 The technical sophistication of the LEGO Technic Bugatti Chiron manifests itself in many ways, all of which convey the engineering excellence of the 261mph Bugatti. The LEGO model features a four-wheel-drive transmission, and on the end of each axle is a beautifully rendered replica of the real thing’s alloy wheel, complete with the famous ‘EB’ (for company founder Ettore Bugatti) at its centre. There’s also a functional seven-speed (plus reverse) paddleshift gearbox, operated via paddles on the steering column, as per the genuine item. The gearbox even has a ‘neutral’ setting, for extra realism.

The Bugatti-logoed steering wheel is, of course, connected to the steerable front wheels, yet it’s under the rear deck that the model’s greatest complication resides – a replica, in miniature, of the breathtaking 1479bhp 8-litre quad-turbo W16 engine. The creative engineers at LEGO Technic have designed some clever bespoke internals that allow the pistons to move up and down in the same sequence as those of the real car: the deliberate lack of cylinder heads is so you can see them working, a process you can’t fail to be mesmerised by. And if you wish you could hear the engine working as well as see it, LEGO has thought of that too, providing a link to a ringtone download for your mobile phone featuring the W16 in all its aural majesty.

The visual essence of the Bugatti Chiron is also captured wonderfully by this LEGO Technic replica; its hunkered-down stance and brutal beauty, its hallmark two-tone colour scheme. Captivating details abound, such as the famous ‘horseshoe’ front grille and the eye-catching full-width tail lights. With the help of a special ‘top speed key’, the active rear wing can be raised and lowered between its handling-biased and top speed positions, and if you press down gently on the finished model you feel the working suspension resisting the force.

The 1:8-scale version is driven by the same philosophy: to give you a sense of the technical complication that lies beneath the real Chiron’s chic, muscular bodywork. And just like the real thing, purchasing the LEGO Technic Bugatti Chiron is a special experience. Its high-quality box is impressively dimensioned and the photography on its lid first class. Lift off the lid and you’re greeted by different sections of construction pieces corralled into their own separate boxes. Meanwhile the build manuals are more like books, and also feature behind-the-scenes stories about the Chiron from Bugatti itself.

The Bugatti Chiron is already an automotive legend despite its comparative youth – the 1:8-scale LEGO Technic Bugatti Chiron seems destined to become just as covetable. 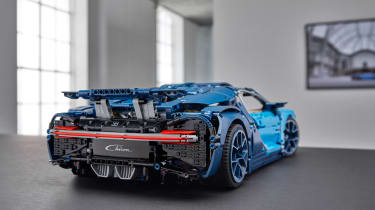 See more of the LEGO® Technic™ range of outstanding supercars and hypercars at www.LEGO.co.uk/technic

The LEGO® Technic™ Bugatti Chiron is available from www.LEGO.co.uk/technic, priced at £329.99.

The Bugatti logo and Bugatti wordmark are trademarks of Bugatti International S.A. and are used under licence.