Behind the wheel of a Mini Cooper S at Goodwood Revival 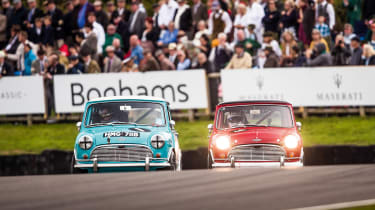 I’ve read about it lots of times, but right up until a split second before the impact I never thought I’d do it myself. Let go of the steering wheel and shut my eyes, that is.

Crashing a racing car is an odd feeling. Already in a heightened state, the instant you lose control your brain starts processing things at ten times normal speed. Things do genuinely seem to slow down and you find yourself making bizarrely lucid decisions. In this case wrestling the car into a slightly more favourable trajectory before letting go of the wheel, lifting my feet away from the pedals, shutting my eyes and bracing for the impact.

2018 Goodwood Revival – a guide to the historic racing show

As you may have gathered, my participation in September’s Goodwood Revival didn’t end quite the way I’d hoped. But before we come to the crunch, so to speak, let me fill you in on why the St Mary’s Trophy is one of the highlights of the Revival weekend and how I came to be on the grid with former F1 drivers, Le Mans winners and a constellation of BTCC and WTCC stars. 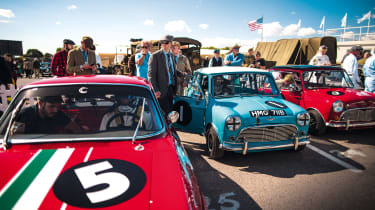 Exclusively for tin-tops and divided across two 25-minute races that count towards an aggregate result, the St Mary’s Trophy alternates between pre-1960 and pre-1966 periods. This year was the turn of the pre-’66 cars, with the 30-car grid comprising Mk1 Lotus Cortinas, Alfa GTAs, BMW 1800 TiSAs, gloriously oversized and overpowered American metal and a swarm of Mk1 Mini Cooper  Ss, a beautiful Surf Blue example of which I would be sharing with its owner, Jason Stanley.

Being a tin-top race it was no surprise to see a host of familiar touring car heroes on the entry list, but with 2018 being the 60th anniversary of the British Touring Car Championship, Goodwood had pulled out all the stops with the invites. The calibre of the driver line-up was ridiculous: 2017 BTCC champ Ash Sutton joined by fellow champs Andrew Jordan, Matt Neal, Gordon Shedden, Gabriele Tarquini and Jason Plato, plus WTCC champions Andy Priaulx and Rob Huff. Then there was three-time Le Mans winner André Lotterer, five-time winner Emanuele Pirro, LM class winners Jonny Adam and Darren Turner, plus LM winner, F1 and Indy ace Mark Blundell. Other famous names included Tiff Needell, Jochen Mass, Jörg Müller, Romain Dumas, Tom Blomqvist (BMW WEC driver and son of Stig) and Tom Coronel.

Like all races at the Revival, it’s a standing start, made at the drop of a Union flag. The grid is tightly packed and flanked so closely by pits and grandstands that you really sense the watching crowd. Immediately ahead of me is Lotterer, in an Alfa GTA, while alongside him is Dumas in a colossal Ford Galaxie 500. Directly alongside me is Blomqvist in another Mini Cooper S (his dad is driving the car in the second race tomorrow), while in my mirrors are more than a dozen assorted pre-’66 touring cars of all shapes and sizes. 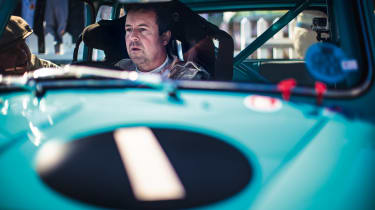 As the starter fiddles with the flag, engine revs rise and a haze of octane-rich fumes fills the air, then tyre smoke as we all leave the line. Well, all apart from me, as evidently I don’t quite have the Mini in gear… I’m swamped and lose nine places before the first corner, leaving me close to dead last. What. A. Disaster.

The first few laps are terrific fun as I fight my way back. In the dry the quickest Cortinas and big-banger American stuff are up to four seconds a lap faster, but I hope to uphold my qualifying honours as fastest Mini by finishing ahead of all the other Minis. For a moment it feels like a tall order, but one by one I reel in all but Blomqvist, who’s just ahead in a red Cooper S.

I cut my teeth on souped-up road Minis in my youth, but nothing comes close to this Mk1 Cooper S race car. It’s unbelievably good: immense fun and properly quick, thanks to the stonking Swiftune engine that revs to 8500rpm and develops around 130bhp. No A-series motor I’ve ever driven has felt so sweet, sharp or willing to rev. It’s as angry as a hornet trapped in a jar. 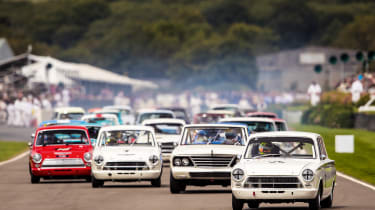 The gearbox has a light throw, the tall lever and dainty lozenge-shaped gearknob flicking through the four-speed H-pattern gate as fast as you can move your arm. The bus-like angle of the little steering wheel looks odd but feels fine, at least if you’re used to Minis. It’s not a physical car to drive, but you’re always busy. The chassis is fabulously agile with plenty of grip and has a magnificent propensity to settle into a perfect four-wheel drift.

It sounds like a terrible cliché to liken it to a kart, but my (very) limited experience of karting tells me the analogy is spot-on. For one thing, momentum is everything, so you want to waste as little of it as possible with unwanted tyre scrub. Consequently you nudge and agitate the Mini at the point of turn-in, then open the steering angle as quickly as you can and let it do its four-wheel-drift thing. Every now and again you need to make a lightning-quick correction, but the car is so small and light it never seems to get too far out of shape, so your focus is always on letting it dance beneath you and using every scrap of track with as little intervention as your courage will allow.

Having got onto Blomqvist’s tail I get a brilliant tow through Fordwater and nip by into the first part of St Mary’s corner, then chase Lotterer’s Alfa and Jackie Oliver’s Cortina. The Mini’s terrific on the brakes, enabling me to duck by the former into Woodcote and the latter into Madgwick. It buys a little breathing space but Blomqvist is soon an inch off my bumper. We have an epic battle, passing and re-passing one another two or three times. It’s pure, on-the-limit racing lap after lap and we’re having a blast. Such a blast that we’re taking too much from our tyres and slowing one another down, as evidenced by the re-appearance of Lotterer’s Alfa and Oliver’s Cortina looming inexorably larger in our mirrors.

Which brings us back neatly to my unplanned exit at one of the fastest points on the lap, a second or two before the braking area for Woodcote. The Alfa’s coming by me on the left, but there’s no point deviating from my line as the Mini is a good 10mph down on the bigger cars at this point. Better to concentrate on the fast-approaching braking area and try to sneak down the inside. Then, with no warning, the Mini’s tail slews wildly to the right. There’s no saving it. 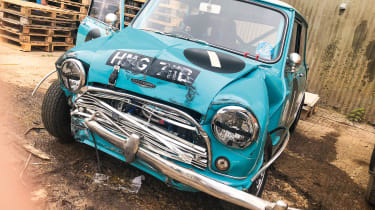 As the bruise that will later appear on the ball of my right foot will tell me, I all but push the brake pedal through the floor in a vain effort to slow the car. GPS in the Mini’s GoPro camera will say I was tipped into the spin at 117mph and hit the earth bank at 66mph. The impact is pretty much head-on, but some of the energy gets dissipated by the subsequent mid-air spin. Does it hurt? Kind of. Concentrated heat in my elbows tells me I’ve smacked them pretty hard. Likewise my feet have clattered around in the footwell. I’m bruised and shaken-up, but otherwise fine thanks to my HANS device and a supremely tough little car. That I’m swearing – concisely and repeatedly – before the Mini has come to a complete halt confirms as much to the marshals, and I quickly clamber out.

After being given a once-over by the paramedics and then accompanying the poor battered Mini to Goodwood’s crashed car boneyard, I spend a chunk of the afternoon in the Driving Standards office talking to former F1 driver – and survivor of one of the most savage crashes in motorsport history – Martin Donnelly. It’s the start of a process involving marshals’ reports, driver interviews, countless reviews of trackside broadcast footage and frame-by-frame scrutiny of all available in-car footage. It’s a fascinating exercise. One I’d prefer not to be part of, but something that’s taken very seriously and conducted with an impressive level of detail by all concerned. In the end it’s deemed a racing incident by Donnelly and the stewards – albeit a serious and entirely avoidable one with no blame on my part – and results in a licence endorsement and a Revival red card for Oliver. For me, it’s a sad and scary end to a fantastic race. For Stanley it’s expensive and heartbreaking, severe damage to the car meaning there’s no chance of him making the grid for Sunday’s race. In incidents such as this there are only losers.

Nevertheless, driving one of the all-time great British cars in one of the most star-studded touring car races ever seen is an opportunity only the Revival can offer, and an experience from which I take only the best possible memories. Along with a deep – possibly irresistible – desire to one day own a Swiftune-built Mini. Few racing cars, and no other front-wheel-drive car I’ve ever driven, is more exciting or entertaining. Just like the era Goodwood Revival so brilliantly recreates, the Cooper S is old but gold.