2018 Goodwood Revival – a guide to the historic racing show

Who will be driving what on 7, 8 and 9 September at this year’s Revival 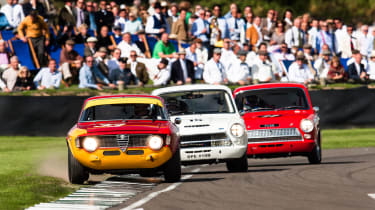 The Goodwood Revival might be a show dedicated to historic cars with performance that’s humbled by hybrid-powered, downforce-generating, turbo-boosted modern racers. Yet, the racing at the Revival is as close as you’d get in any modern formula or championship, and makes it one of the most exciting race weekends of the year.

This weekend sees the 20th anniversary of the Goodwood Revival, and, just like previous events, it will host some of the most famous names in motorsport who will race some of the most significant race cars from the 1940s, ’50s and ’60s. From Friday 7 to Sunday 9 September, rare Ferraris, numerous racing Jaguars and historic tin-tops will shimmy and slide around the ex-airfield circuit.

And if, for some inexplicable reason, you need a break from motor racing, the Revival will also play host to air displays of historic planes, a funfair, vintage fashion shows and shops selling traditional clothes, toys and furniture.

If you haven’t been to one of the previous 19 Goodwood Revivals, or you just want to know what’s on at this year’s show, read our guide to who and what will be there, how to get there and what to wear.

> Find out what happened at this year's Goodwood Festival of Speed

The cars may be old and the races not part of any sort of championship, but the Revival is so high-profile it attracts some huge names from the world of motorsport. Current GT racers Andy Priaulx, Darren Turner, Romain Dumas and Andre Lotterer will be joined by previous Le Mans winners Emanuele Pirro, Richard Attwood and Derek Bell. 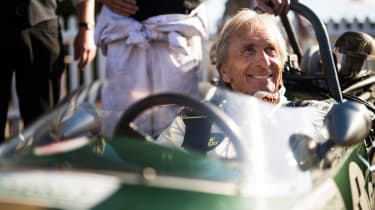 Swedish rally driver Stig Blomqvist will be racing in two Revival trophy races, and from the world of Formula 1 will be Mark Blundell, Karun Chandhok and Jochen Mass.

Racing against the professional and retired drivers will be evo columnist Richard Meaden, who will be campaigning a Jaguar E-type and a Mini Cooper S in different races. Ex-Take That band member Howard Donald will also be at the Revival racing his Porsche 356.

This year the Goodwood Revival will host a race made up of the most valuable grid ever. The cars competing in the Kinrara Trophy – a 60-minute race for pre-1963 GT closed-cockpit cars – total almost £200million. No less than 10 Ferrari 250 GT SWBs are on the entry list, joined by a 250 GTO and a 330 GTO. And that’s just the Ferraris; there are also four Aston Martin DB4 GTs, two AC Cobras, two Austin Healey 3000s, a Maserati 3500GT and eight Jaguar E-types.

The other GT races are hardly lacking in rare and expensive motors, either. For instance, the RAC TT race also has a strong line-up of Cobras and E-types, as well as two Porsche 904s, a couple of Corvette Stingrays and an Iso Grifo. Two D-types, a Ferrari 246S Dino, an Aston Martin DBR1 and a bunch of Lotus 15s will race in the Sussex Trophy. 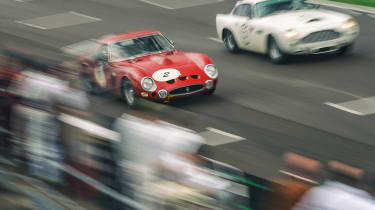 If it’s thundering, big-capacity V8s that get you excited, the GTs in the Whitsun Trophy will be your highlight. There are six Ford GT40s racing against six Lola T70s and five Chevrolet-powered McLarens.

At the other end of the spectrum are the historic touring car races, the Jack Sears Memorial and the St Mary’s Trophy, full of a much more humble selection of cars. The former race has very ordinary-sounding Austin A30 and A35s, Morris Minors and a Ford Prefect. While the latter sees small cars like the Ford Anglia, Lotus Cortina, Alfa Romeo GTA and the really tiny Mini Cooper S go up against the gigantic Ford Galaxie and Plymouth Barracuda. These old touring cars may look more ordinary, but in previous years these races have been the closest and most exciting of the entire weekend. 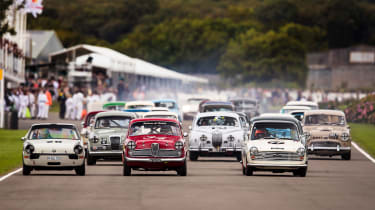 The races aren’t just for cars; there is one race, The Barry Sheene Memorial Trophy, that’s for old motorbikes and includes a range of Nortons, BMWs, Triumphs and Vincents. Even if you don’t like watching two-wheeled racing, they do add a pleasant aroma of Castrol R to the show.

The Revival is held at the Goodwood Motor Circuit, so if you’re following a satnav, make sure you select that location rather than the Goodwood House or Goodwood Racecourse. However, if you just aim for Chichester ­– the closest town to the race circuit – there will be plenty of signs directing you towards the show, so you can’t go too far wrong.

For all the events that Goodwood hosts – the Festival of Speed, the Members’ Meeting and the Revival – traffic is an issue. The roads around the circuit are typical West Sussex country lanes and are not designed for the volume of traffic that descends on the area for the shows. The hosts try to organise the traffic to reduce people going in the wrong direction or causing any issues, but unless you get to the circuit early – before 8am – you will queue before you eventually park up. 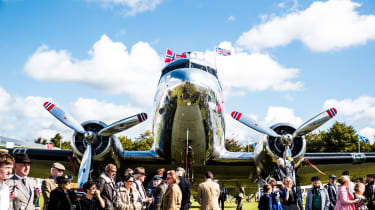 All the car parks are made up of grassy fields; even if you attend in a classic car and are directed to the special display parking, you won’t be put on tarmac. If the ground is dry then there’s very little to worry about, but if it rains the surface quickly becomes muddy and the tractors that ferry people around churn up the ground, making it difficult to traverse on foot without getting very dirty. Performance cars that aren’t suited to going off-road do often get stuck, too.

The weather forecast for this year looks warm and dry, so the car parking woes of the past few years might not arise for the event’s 20th anniversary.

You’re encouraged to dress in clothes that wouldn’t look out of place in the ’40s, ’50s and ’60s for the Revival. Now, it isn’t obligatory, and you might not be the sort of person who likes dressing up, but we’d suggest that you do make an effort. You don’t have to look as though you’ve just emerged from an incense-infused boutique on the King’s Road circa 1965 or you’re about to attend a 1950s American high school dance, but most people wear something that at least looks old, so you will look out of place dressed in entirely modern clothes. The best way to fit in without kitting yourself out in expensive head-to-toe original vintage wear is to just dress smart. 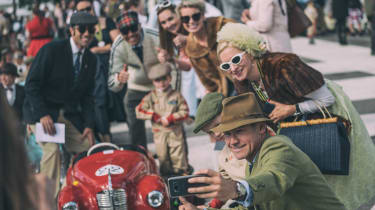 If you do opt for a proper outfit, there are a few suggestions we would make. Firstly, unless you have some sort of military background or a close family tie to the forces, it isn’t wise to go dressed in an army, navy or RAF uniform. Goodwood’s history as an airbase means there’s a strong military side to the Revival and lots of veterans attend the event. Dressed in uniform without the background, connection and experience, you may feel like a bit of a fraud. If the uniform is more than just a costume to you, wear it with pride.

You don’t have to spend a fortune to look appropriate at Goodwood, but cheap, fancy dress-style costumes do look out of place. Thin, shiny, nylon Austin Powers-style outfits, that wouldn’t look out of place on a stag do, are best avoided. Instead, as we said before, just dress smart.