We take the Hyundai i30 Fastback N up the Col de Turini, a 31km stage of the Monte Carlo World Rally Championship 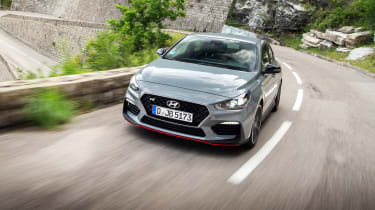 Monaco is a place of high glamour, where billionaires eye up each other’s superyachts and fritter away fortunes in casinos. It’s been the backdrop to hundreds of movies, but for car enthusiasts it is famous for one thing – motorsport.

The principality hosts the two most prestigious events in the world – the Monaco Grand Prix and the Monte Carlo stage of the World Rally Championship.

While we couldn’t get hold of a Mercedes F1 W09 EQ to set a lap time on the streets of Monaco, we could try a close relation of a WRC winning rally car to make a pilgrimage to the most entertaining stage of the Monte Carlo. Watch the video to see how we got on.

The stage we chose is the Col de Turini, a 31km stage of the Monte Carlo World Rally Championship and widely regarded as one of the toughest and most exhilarating stages on the Championship. It’s an extremely challenging and technical stretch of road, mixing tight hairpins with quick corners. It is a challenge for any car and driver, but the rewards come from the breath-taking landscape as you drive up away from Monaco and into the Alps.

For these sorts of roads, one of the supercars which litter the streets of Monaco wouldn’t necessarily be the most suitable machine. They’re too wide, and maybe a little intimidating on the tight hairpins which are open to the public. Instead, we chose one of our favourite hot hatchbacks – the i30N in Fastback form.

Hyundai’s motorsport division knows these mountains well, having competed in the WRC since 2014. This knowledge has fed directly into the development of the company’s first serious performance road car, so it should be perfect for our trip to the peak.

Being a Fastback, our i30 N comes with the Performance pack as standard. That means it gets a power boost to 271bhp and a wider spread of torque from 1500-4700rpm. 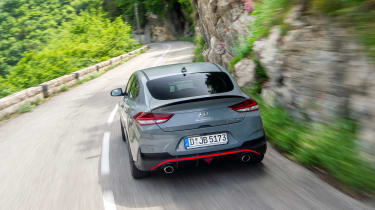 Plus, it adds an electronically-controlled limited-slip diff, 19-inch alloy wheels with Pirelli P Zero tyres developed specifically by the Italian tyre manufacturer for Hyundai’s N models, bigger brakes and an active exhaust which has one of the naughtiest exhaust notes this side of a supercar – perfect for the Alpine tunnels.

But power isn’t everything, especially on roads as twisty as the Col de Turini, and the i30 Fastback N excels in the handling department too. The stiffened bodyshell and rear strut brace means the Fastback grips hard and remains communicative, while still riding comfortably on the broken roads of rural France.

What’s more, the N can be set up to suit the road, track or driver’s mood. Choose between Eco, Normal, Sport and N, or set up your own mode in Custom to alter the throttle mapping, suspension and differential settings.

Hyundai’s first attempt at a hot hatch is remarkable. The philosophy of adding maximum feel and engagement allows the driver to enjoy a road like the Col de Turini to the maximum. In the home of the casino, it feels like Hyundai has all the aces.