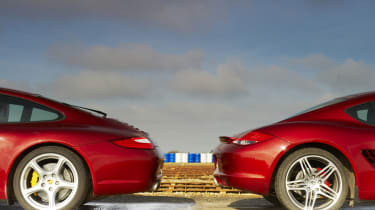 Or we could rephrase the question. Cayman S or 911 Carrera, which is the better drivers’ car? This should be easy to resolve by just driving the two cars, so that’s what we did. Trouble is, John came back with the wrong answer. I can guess his arguments now: the position of the 911’s engine gives it more character, makes it a more intoxicating experience.

I’ll agree that allowing the tail to wag the dog certainly makes it more challenging, but Porsche has spent 45 evolutionary years trying to make the over-engineered Beetle handle properly and all it’s really done is gradually bleed the character out of it. The 911 still understeers in the wet and has a heavy arse.

The Cayman only has one fault - it’s not as good as it could and should be. Porsche sandbagged the mid-engined coupe so it sits neatly in a niche, not threatening the 911’s alpha-male status. Yet despite this the ‘lesser’ car still holds the dynamic aces. Think about the basic architecture, the flat-six engine (same noise, touch more volume, equal shove in the back) mounted low down in the middle of the frame, putting the masses in the best position to enhance confidence and ability.

Result? A chassis that works all four tyres very evenly, that delivers a more accurate, predictable, adjustable and manageable balance between over and understeer and is genuinely more enjoyable to drive. Take the steering, similarly precise to the 911’s but connected to a front end that tracks the road better and is keener to turn in. It follows that the Cayman benefits from sharper reactions, but it also comes across as lithe and alert, seeming to pivot around your hips rather than the rear axle.

It’s been dismissed as too polished, but that’s sour grapes from 911 drivers attached to their car’s flaws. Porsche is trying to show them a new route to driving excitement. Better this than the Panamera. Ollie Marriage

The opposition says... It looks bad for the 911, I grant you. The old model costs 40 per cent more, offers straight-line performance that is marginally better according to the stopwatch but virtually indistinguishable measured by the seat of your pants, and doesn’t look particularly handsome. (The red Carrera in the shots is wearing the more flattering and optional 19in ‘Sports’ alloys while the car we used for dynamic comparison was on the stock 18s – a rare sight.)

On paper, the Cayman S pretty much has the measure of the 911 but, of course, we only drive on paper when leaning against the bar in the local. On the road, the argument for the Cayman unravels somewhat.

I’ve seen this Cayman lauded as ‘the perfect sports car’, and within seconds of driving off you know you are at the wheel of a very finely made sports car. It’s astonishingly quick, accelerating vividly through the gears, and its natural gait, its comfortable cruising speed, seems to be 105mph.

Impressively, it can lay this pace on a fast B-road, and yet I was left strangely cold by the experience. I’ve been a fan of previous Caymans, but what was somewhat lacking this time was feel and involvement; it was clinical, efficient and I felt a little excluded.

I perhaps didn’t drive the 911 quite as quickly, though I could have done. The point is that you get drawn in and immersed in the process of getting the 911 to go around corners effectively. Its steering is as crisp as the Cayman’s and you can feel the nose lock onto line, which is your cue to get back on the gas. At this point in the Cayman you’re trying to feel how much rear grip there is and you’re a little wary of pushing too far because it feels a bit on edge. In contrast, the 911’s rear tyres are driven into the road as you squeeze the throttle, finding massive grip and pushing the car through the apex to the exit, nose slightly light. You know when you’ve got it just right, you can feel precisely how hard you’re pushing, and it’s the feeling of being instrumental in every part of the cornering process that makes the 911 so absorbing and intoxicating.

Is that worth the best part of £20K extra? For me it is. The Cayman is a very fast and polished car, but I don’t want to simply drive fast, I want to enjoy the drive. In a 911, the journey is the destination. John Barker