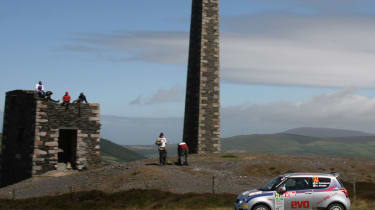 Man, bank, road, bank, man, bank, road, man exiting road sharpish, bank… I’m spinning. It’s Thursday evening and it’s pouring with rain. A few moments earlier I’d hurtled round a six-left to discover a fellow in a sort of tank-top-cum-cardigan that was probably once fluorescent, waving his arms as though he were directing aircraft without the ping-pong bats. I got the distinct impression that he wanted me to slow down, and, being the cool, calm and collected person that I am, I panic-braked, locked up the rears for the third time in the stage and we promptly started gyrating down the glassy wet road towards him.

It’s stage four of the third round of the Suzuki Swift Sport Cup, part of the British Rally Championship, and we’re doing one of the all-time classic rallies – the Isle of Man. For how much longer we’ll be doing it I won’t be entirely certain until we stop our dizzying pirouettes.

We started out well at about half past six this evening. Sitting under the wonderful, arched gateway to Marine Drive, the road writhing out in front of us along the clifftops south of Douglas, I had that now-familiar knot of nerves in my stomach, but I was at least calmer than before the Jim Clark (evo 120).

My ‘lines’ were appalling through a lot of the fast flowing corners of that opening stage but, to my surprise, the timesheets showed I was tied third fastest of the Suzukis. I was still behind the insanely quick Mark Gamble and rapid Irishman Ross Forde but level with Danish Swift champion Niki Bjerg. We then drove south to Castletown for a couple of runs along a 1.36-mile spectator stage. You dash through narrow streets, past front doors, then past a monument in the town centre where most of the town are gathered, before hurrying over a bridge and around the boats bobbing in the harbour. It seems strange driving that fast through a town, and quite fun, but it’s a stage you want to get out of the way without doing anything stupid like ending up in someone’s front room, hogging the sofa. The real stages, the ones that the Manx has built its reputation on, are being saved for tomorrow and Saturday. All except one.

At 13.66 miles, Cringle is the longest stage in the rally. It’s foggy this evening and the soft drizzle of Castletown has turned into proper moorland rain. Cut slicks are probably not the preferred option but everyone is in the same boat, so to speak. The brake bias, combined with my less-than-deft touch on the pedal, means that we have a couple of half-spins early in the stage as the rears lock up. Then comes The Big One. We end up facing the bank and there’s some steam coming from the nose but the car seems perfectly OK otherwise, so I reverse out and drive on, keeping a wary eye on the temperature. The reason for the arm-waving that had instigated the merry-go-round becomes clear as we approach the corner. Perched on the top of a heap of cars is one of the other Swifts. The ‘OK’ board is out, though, so we carry on until the end of the stage where a marshal takes one look at my prototype lawnmower and asks whether I’d like some L-plates.

So we got away with it. We’re minus one foglight as we roll back into the now-dark service area, but a bit of gaffer tape soon neatens things up. Despite the spins we’re still fourth out of the Suzukis, but holding on to that over the next two days and 158 stage-miles will be quite a test…

By halfway through day two my head is spinning like a tossed coin again. This time, however, I’m standing in our service area having questions thrown at me. Had I had any thoughts about tyres for the next three stages? ‘Ummm… what’s everyone else doing?’ is my not very helpful reply. Tyre choice is not something I’ve ever had to consider before, but right now these decisions could win or lose us critical time in the stages. We’re waiting on weather reports and gambling on whether to take slicks, cut slicks (lightly or heavily cut?) or intermediate rain tyres. Choose inters and discover dry stages and you’ll have less grip and overheat the tyres in a matter of miles. Slicks on a narrow, soaking-wet road is the sort of thing to give you sleepless nights well into your dotage.

We (they) go for inters on the rear with cut slicks on the front and two inters in the boot (we’ve been taking two spares to add a little more weight over the rear anyway) in case the heavens open. I’ve been using inters on the front so far this morning (I was way too cautious on the first two stages but pulled myself together after that) and as we drive out to the start of SS11 in Little London, the cut slicks feel as though they’re made of lightly chewed bubble gum in comparison. Stage 11 is great. Then the rain sweeps in from the sea. Stage 12 is so narrow it has grass growing up the middle of much of it and driving it on slicks feels like trying to run in silk socks down a corridor of polished parquet. I lose ten precious seconds to the car behind and co-driver Chris and I decide to change from slicks to our spare set of intermediate wets before stage 13. There isn’t a lot of time between stages and, ridiculous as this may sound, I’m not sure I’ve ever had to change a wheel before. These are not ideal conditions for a first attempt. By the time the third wheel-nut is off we’re wearing soaking wet and extremely heavy fireproof overalls and thinking how fortunate it was that they moved the rally to July to catch the summer weather. We don’t do a bad job and we’re only three minutes late checking into the stage. But those three minutes equate to 30 seconds of penalties and, as I sit wiping the rain from my glasses as the little traffic-light counts down to our start, there’s a very real possibility that the time we’ve lost in penalties won’t be recouped in the following 7.45-mile stage.

‘Do you think we made the right decision?’ says Chris.

It’s when we catch the car in front that I know we’re going well. The intermediates are sliding and finding grip wonderfully progressively and suddenly I feel really confident to attack the corners even though the wipers are going manically. Waiting to go back into service 40 minutes later, someone hands me a timesheet through the window – we were the second fastest Suzuki through the stage (20th fastest overall) and took 45 seconds out of our nearest rival, negating our 30 seconds of penalties. For a moment I forget how soggy my bottom feels.

And then there’s Tholt-e-Will, a wonderfully fast stage that rises dramatically from the valley floor through a national park to the Mountain road. You may be familiar with it from in-car video of one Ari Vatanen driving it in an Opel Manta in the 1983 Manx (if you’re not, then look it up on YouTube. All I’ll say is that the cattle grid still looks narrow).

At the end of day two, as the guys reshape the front right corner of the Swift using a precision sledgehammer (I’d failed to notice some mud on a one-left-plus early in the day and slithered into a wall, luckily not losing too much time but bending the subframe and crushing the washer bottle, leaving the car smelling of washing-up liquid), fourth place is amazingly still ours by a whole minute. As I leave the Swift in Parc Ferme, I can feel the knot in my stomach returning.

Nick Rowland’s a nice chap; he’s only 19 and looks a bit like Prince Harry. He’s clearly talented, too, as he’s part of the British Rally Elite Scheme. But he’s in fifth, I’m in fourth and I really want it to stay that way. I’ve had enough experience in my life of that very British propensity for snatching defeat from the jaws of victory and this time I want to cling on. So naturally I push too hard, make a couple of mistakes and drop half a minute to Nick in the first two stages of day three. It takes a lot of deep breaths before stage 19 (our second run up Tholt-e-Will) to calm down and claw back a precious four seconds. At a guess I’d say I’m quicker on the faster stuff but still struggling with the slower, more technical corners. It’s a strange sort of contest because you never see your opponent in the heat of battle and then between stages you end up talking amiably to each other.

They say fourth is the worst place to finish but it certainly wouldn’t feel like it to me. However, on stage 21 we come round the same corner where I spun on Thursday evening to see an OK board indicating someone’s gone off. And there’s Ross Forde, standing in the road looking utterly disconsolate. Now we’re third.

I try not to think about everything third place means and just keep calm, but my mind suddenly feels very full. Nevertheless, by the last stage it looks like we should have done enough. Should. Stage 23, ‘Classic’, is over 13 miles long and if I can see Nick in my mirrors as I finish in front of the TT grandstand in Douglas then it probably means he’s beaten me. It starts over moorland on a tiny strip of tarmac that bucks and hairpins with the occasional bit of standing water. Then it goes down into the trees for an incredible succession of endless fives and sixes flat out through a dark tunnel of trees where it’s hard to keep up with the pace notes. It’s here that I start to sweat. Eventually we shoot out into the suburbs of Douglas. Then down the main TT straight in front of the crowds where I completely misjudge where the final chicane is and brake way too early. But as we go past the final red marker-boards and break the timing beam I can’t see Nick in my mirrors. It gradually dawns on me that we must have done it.

Six months ago when I was trailering my 205 round the country, sleeping in the back of the Navara and chugging along at the back of the entry list to get signatures on my new licence, I never imagined I’d be standing on a podium after two and a half days of international rallying, wiping champagne out of my eyes. Apologies if that sounds pathetically, gushingly movie-scriptish, but if you want to know how much it meant then observe the expression on my face. You are looking at one very happy Catchpole.