Harry Metcalfe has a world exclusive drive in the Scamander, the astonishing new creation of ex-TVR boss Peter Wheeler, and finds it right up his street (and across his field, and through his pond…) 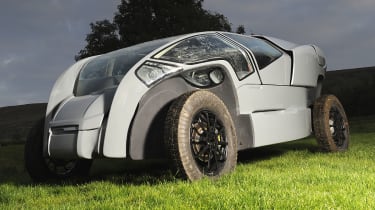 Lots of people are fed up with their traditional sports cars, like Ferrari and Lamborghini produce, so I wanted to create an alternative.’

Welcome to the slightly weird but rather wonderful world of Peter Wheeler, the ex-owner of TVR who most people assumed had slipped quietly into retirement following his sale of the company to Russian Nikolai Smolenski in 2005. In fact nothing could have been further from the truth: this crazy looking device is the mud-splattered proof of Wheeler’s still fiercely burning passion for building outlandish vehicles.

‘I created it for me, to be honest,’ says the softly spoken Yorkshireman, now 63. ‘I enjoy shooting, sailing and driving on track, so I wanted something that could cover all these elements. I call it an RRV, for rapid response vehicle. Just don’t call it a car…

‘I thought about doing it at TVR but we never got round to it while I was there, but following the sale I’ve had a team of up to eight engineers working on it for a while now.’

There’s always a tingle of excitement when you’re the first journalist in the world to try out a brand new car (sorry, RRV). I’d known about Wheeler’s plans to build an amphibious vehicle for some time, but when I clap eyes on the Scamander prototype I’m genuinely shocked. In fact, I’m utterly dumbfounded by the whole concept. Surely this is innovative vehicle engineering at its finest.

OK, it’s not good-looking in a conventional sense, but take time to drink it all in and there’s a certain appeal to its wild, unorthodox shape. If it looks like there’s a bit of TVR DNA in there too, then that’s probably because it was penned by Graham Browne, TVR’s chief designer for many of the Wheeler years and the man who also shaped the Tuscan, T350 and Sagaris.

Wheeler’s initial brief for the project was simple: it had to be lightweight, fun to drive on and off-road, have plenty of room inside and, oh yes, be able to power itself through water at up to eight knots. This was never going to be easy.

It also entailed a complete rethink of what makes a good off-roader, and with current SUVs getting heavier with every generation, Wheeler and his team went back to basics. Low weight was the key, he reckoned, and with a target of 1100kg it meant any thoughts of making the Scamander four-wheel drive had to be abandoned. To make up for the reduced traction available with 2wd transmission, the team needed to fit the tallest wheels possible (the bespoke 21in rims are shod with 35in diameter tyres originally produced for 1930s Bentleys). Large diameter wheels are excellent off-road as they aren’t deflected by bumps like a smaller diameter wheel would be. They also increase traction by having the biggest possible contact patch (that’s why agricultural tractors come equipped with such huge rear wheels). The production Scamander will also have the facility to independently brake the driving wheels (via the ABS system). Known as ‘fiddle brakes’ in the curious world of car trialling, they work in much the same way as a limited-slip diff but with less initial wheel-slip.

The prototype is powered by a 2-litre Ford Zetec engine, but that too will change. Wheeler had wanted to use a newly developed aeronautical diesel engine but development has been so slow that he’s now turning to a stalwart of past TVRs, the Rover V8. Production of new 4.6-litre engines has just started up again and, thanks to its low-tech design, it’s still one of the lightest engines out there for its power output. Sounds like an excellent choice to me.

The plan today is for the team to make a few final adjustments to the Scamander at the old TVR factory in Blackpool (still owned by Wheeler) before transporting it to Peter’s moorland farm some 30 miles away, where I’ll get the chance to drive it on road, moorland and, finally, in Peter’s fishing lake. There was talk of popping it over to Lake Windermere for the full water-based experience, but the team was worried about attracting unwanted camera-wielding bystanders. Can’t think why.

When the Scamander descends from its trailer even the sheep grazing beside us stop chomping and stare as the barmy looking device charges up to where we’re standing. It looks even more bonkers now it’s out in the open; battleship grey kind of suits it, though I hear the team plans to paint it bright orange over the coming weeks, so it won’t stay this restrained for long.

We’ve got to get a move on, so Peter suggests I should drive it straight away. Fine by me. It’s quite a step up to the cabin and, once inside, you have to work out how to manoeuvre yourself into the central driver’s seat, flanked on either side by a passenger seat. At least you can work it all out while standing up, because instead of doors the huge roof section slides under the rear bodywork to help access. The steering wheel is a work of art, too, designed to pivot away from the column so that even 6ft 5in of Peter Wheeler can fold himself into position.

Once installed there’s plenty of room. In front of you will be a typically flamboyant, TVResque dashboard but that’s not installed for today’s trial. There is, however, a row of switches set into a tube running the width of the cabin above my head; to turn the ignition on I flick the second one from the left and then go for the starter. The Zetec engine bursts into life directly behind me. Here we go then.

There’s a conventional gearshift to my left so I engage first and take off for the hills. The central driving position takes some getting used to, especially through the tight gateways littering our route – the Scamander seems pretty wide from where I’m sitting – but even with the limited power available it feels lively enough.

There isn’t really time for an extensive road drive so I soon turn off onto a bumpy farm-track leading to the moor. There’s no real need to slow down – the supple, long-travel suspension softens the ride beautifully, as does the long wheelbase. It all feels so unconventional; a Defender would have you hanging on for dear life along here, but not the Scamander; the ground clearance must be twice as good as the Land Rover’s too. With a potent V8 installed mid-ships, this thing could give a Bowler Wildcat a run for its money.

But all that’s still a long way off. Right now the light is starting to fade and we need to make our way off the moor and over to Wheeler’s fishing lake. The engineering team are waiting for us with the latest in a series of water propulsion systems they’ve been trying: bolt-on paddles for the rear wheels (Peter is insistent they won’t use a propeller because it would require another gearbox and therefore add weight). A few minutes later there are gasps of amazement as the RRV starts up and drives into the water, splashing its way to the middle of the lake. I’ve seen everything now.

Wheeler assures me it can’t sink because the sides are foam-filled pods, fixed to an aluminium central tub; the whole thing built around four tubular beams running the length of the vehicle. Behind the cockpit is a load area for transporting stuff in the same way that a pick-up truck might be used. In fact, to get around all the latest emissions legislation – or the ‘stupidity of all this CO2 nonsense’ as Wheeler puts it – the Scamander will be classified as a commercial vehicle. But if that sounds a little, well, sensible, there’s plenty more that’s utterly bonkers.

‘We’re developing a remote control unit for it so you can control the Scamander even when no-one is on board,’ grins Wheeler. ‘You’ll be able to start it up and make it ‘swim’ to your boat to pick you up from your mooring, for example, or you could send it back to the beach and park it up for the night. It’ll be the biggest remote- control toy ever!’

From where I’m standing, Peter Wheeler’s version of retirement looks a whole lot of fun. He’s already taken a couple of orders and there’s military interest too. Perhaps Blackpool could be back in the motor business again after all.

I really didn’t know what to expect when I decided it might be fun to take a Maybach 62 round the Ring back in issue 59. The admittedly flawed reasoning was that the 62 was the most powerful car in the Mercedes family at the time, with a 50bhp advantage over the SL55. So we needed to see just how fast it really was.

I was quite sure Mercedes would refuse to supply a car but, amazingly, they agreed, with no conditions attached. Shame they didn’t tell the chauffeur who came with the car, as he was white with shock when he heard what we were planning to do with his 'baby'. The three-hour trip to the Ring turned into one agitated discussion between our driver, the press office in Germany and the press office in the UK.

In the end I got the green light and took to the track. It turned out to be brilliant fun. The 62 proved properly quick in a straight line and predictably leisurely in the corners. The handling was pretty good, though, and I have to confess that they ended up being the best laps I’ve ever done at the Ring. I’ve been a massive fan of the car ever since.

Still can’t see anyone buying one to go racing in though. Harry Metcalfe