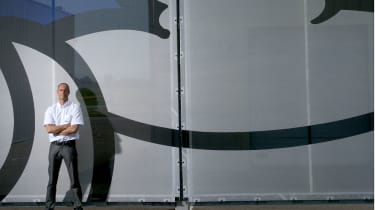 It’s a stunningly beautiful day in the south of France – mountains in the near distance, brilliant blue sky above. Standing before me is a tall, smartly stylish man, smiling and confident, with the deep tan of someone who works outdoors. The only clues to his extraordinary life are his shoes: subtle, grey, low-cut racing boots. Oh, and the sound of tyres squealing all around us.

The man is Jerome Haslin, chief test driver for Michelin, and it is his verdict that shapes the performance of some of the most exciting cars on the planet. It’s a role he takes very seriously – and clearly enjoys with a great passion. Not surprising when a typical day will involve up to eight hours screaming sports cars around the best tracks in the world, from Magny-Cours to the Nurburgring. ‘It varies,’ he smiles. ‘Today I have only driven about three hours, but when I’m with a client, such as Ferrari or Porsche, I will be all day in the cars.’ And the list of cars he has tested reads like a dream garage. Various Ferraris, Maseratis, Bugattis and all the current Porsches. He calmly describes going flat-out in the Veyron as ‘a nice experience’.

Not that he keeps all the fun for himself. He is in charge of 25 other test drivers, including two for motorbikes, ten for trucks, and even one for tractors. The 450-hectare test centre at Ladoux in south eastern France incorporates 19 different test tracks, including a precisely irrigated wet handling circuit, a 2.8km dry  handling circuit and a 7.8km high-speed circuit with banked corners.

Of course Jerome didn’t get here by chance. ‘My passion has always been driving,’ he tells me, ‘so after I graduated with a degree in mechanical engineering I looked for jobs that had an element of driving.’ He joined Michelin in 1992 as a tyre design engineer, spending two years getting to grips with tyre technology and performance. Then he spent six months training solidly, learning to understand test methods and hone his car control skills, spending long hours sliding round the practice circuit. ‘I started with a BMW 3-series,’ he says, ‘which is a very nice car to learn on.’Driving on the absolute limit has to be second nature to Jerome so that he can make subjective assessments and perform precise tests without being distracted by the business of controlling the car. ‘It’s a bit like wine-tasting, it’s sensorial analysis, but you need a good memory because of the time it takes for tyre changes – imagine tasting one wine then having to wait 50 minutes before tasting the next!’

During his training he spent hours cornering with a g-meter on the dash, getting familiar with the feeling of different lateral g-forces; the result is that his gut is now a sensitive instrument, allowing him to perform exact manoeuvres instinctively.

To get a little insight into Jerome’s work, Michelin has organised a morning’s fun on its test track, armed with a Porsche Carrera 2 and three different sets of tyres. Jerome will show me what he does – and later I’ll have a go.What could possibly go wrong?

I have to confess that I’ve never really liked rear-engined Porsches and their tendency to lift-off oversteer, but in this case it’s the ideal choice to show how tyres can transform handling. First stop is the 4.1km wet track, and with standing water controlled to 3mm, it’s a playground for any petrolhead. As soon as Jerome drives onto the track we’re going sideways at motorway speeds, and all the time he chats calmly about tyre characteristics. My attention, however, is grabbed by the sturdy-looking Armco directly in our path. ‘Ah yes, that’s the one place on the track it is not safe to come off. You must be careful here,’ he cautions. Whilst power-sliding past it.

In all my years developing cars I have never known a driver as talented as Jerome. He is controlling the slides so precisely that photographer Stuart Collins is totally confident standing right on the rumble-strips on the apex of the hairpin. Not only that but as Jerome performs balletic manoeuvres he’s able to describe in detail the sensations that are a key part of his tests. ‘On the wet circuit we are looking for consistently fast lap-times with little slip, but I think your photographer wants more action shots, yes?’ Wheeeeeeeee!

Next we head for the ‘Circuit grande vitesse’, take the slip-road onto the 1.5km straight, then power onto the first banked corner. Without warning, Jerome yanks the steering and suddenly we’re heading rapidly for the Armco. ‘As we put in a rapid steering input at high speed, we observe how long the car takes to respond,’ he says calmly before yanking the steering the other way, just in time to avoid making the local news. Next, he holds the steering wheel at a smaller angle and observes how long the side-force takes to build up. I’m finding it difficult to concentrate – there’s a concrete bridge coming rapidly into view and we’re very slightly sideways towards it. Once again he straightens the car just in time – and then proceeds to demonstrate what happens when you let go of the steering on a banked corner. ‘For each banked corner there is a neutral speed where the force of the car pushing outwards is balanced by gravity,’ he says, and we go round staying perfectly in lane.

Hard onto the straight and we do the whole ‘experiment’ again, but much faster this time, swerving at well over 150mph. After a blistering lap we leave the slip-road with the brakes squeaking and smelling of ‘hot’.

Next stop on the fun fair is the handling track, 2.8km of twists and turns that are officially sanctioned by the FIA for F1 testing. On the way there, we pass the wet circuit just in time to see two 17-ton trucks perform synchronised drifting in a cloud of spray.

As we wait for a prototype bike to finish on the handling circuit, Jerome explains what’s coming up: ‘First we run at a fairly constant speed, staying on the middle of the road, just getting a feel for how the tyres perform, seeing where it under or oversteers, etc.’ Just then the bike screams round the corner – the rider seems to have his elbow down, never mind his knee. As he leaves the circuit his huge grin confirms this is a great place to work.

As we ease onto the circuit, Jerome nails a steady 4000rpm in fourth gear and we follow a faint white line in the middle of the track, noting how the car responds to turns without the complication of accelerating or braking. Now Jerome steps up the pace dramatically for three timed laps. By crikey he’s good, hitting around 130mph before on-the-limit braking for the second-gear hairpin.

And then, after three flat-out laps, it’s my turn. Avoiding the temptation to just drive very fast, I try to perform some of the tests Jerome has shown me. After all, I’ve had nearly two decades in the car industry, testing everything from Fiestas to Bentleys; surely this should be easy? Er, no. Whilst concentrating on g-force in one corner, I miss the line into the next. And as I reveal the full extent of my talent deficit and we drift towards the grass, Jerome comments kindly, ‘Of course, every tyre has its limits…’

Eventually I start to get the hang of it. The standard Pilot Sports work really well in the wet and equally well in the dry, but backing off when turning into a corner brings the back end round. Changing to Pilot Sport Cups, immediately the grip is noticeably greater and we’re entering corners in a higher gear in the dry, while the lift-off oversteer is virtually eliminated. The lap times tell all: 1min12.33 for the Pilot Sport, 1min11.35 for the Sport Cup – and a blistering 1min8.78 on racing slicks.

After a few laps I have a profound respect for Jerome’s talent, and as we slow down and exit the circuit I ponder what it would be like to live this life. Back in the car park, under those still- blue skies, Stuart asks whether I’d like Jerome’s job. Without a doubt, mate, without a doubt.

Avoiding the temptation to just drive very fast, I tried to perform some of the tests Jerome had shown me, after all I have had nearly two decades in the car industry, test driving everything from Fiestas to Bentleys, surely this should be easy? No chance, its worse than the old rubbing your tummy whilst patting your head challenge, whilst concentrating on G force in one corner I missed the line in to the next, and as I discovered my talent deficit we drifted towards the grass, Jerome casually commented “of course every tyre has its limits”!

After a few laps I have a profound respect for Jerome’s talent, as we slow down and exit the circuit I ponder what it would be like to live this life. In the calm of the car park under the clear blue sky, with smiles all round, Stuart asks whether I would want Jerome’s job, ‘without doubt mate, without doubt’.