It’s the last event of the season for fledgling rally driver Henry Catchpole, who looks back over a year he’ll never forget 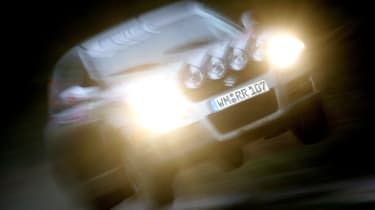 I’m sorry to impose on you so early in a feature, but I’d like you to imagine a corner. Two actually, but they’re sort of joined together. Imagine we’re going downhill and the track is thick with cold, slippery mud, so there’s that feeling of almost falling, gaining speed unnaturally quickly. Low, late-afternoon sun is filtering through the conifers, glinting off the recently fallen rain clinging to the needles. The little Suzuki is buzzing angrily.

As we descend, Chris calls out ‘double caution, three-left long, slippy, tightens through dip, into sudden turn hairpin left, don’t cut, narrows’. I try to relate all of this to what I can see of the track as it disappears in front of me. The controls are light, particularly the steering as the tyres slide across the surface. I brake as I turn into the ‘three’ and, as the nose digs in, the empty rear end of the car goes lighter still and arcs around to the right. Now we’re in a slide, almost weightless. With lock on, we’re at right angles to the track, the side profiles of the tyres scrubbing off speed – hopefully enough speed – the nose of the car pointing into the forest on the inside of the corner. It’s a weirdly wonderful sort of limbo where you’re out of control, but you want to be. The trees are close. There’s a handful of spectators who have tramped out to watch this corner. All you can do is hold the trajectory and wait for the hairpin left to appear. Just before you reach it, nail the throttle and start the front wheels spinning, fighting, tugging for traction so that as the gloopy river opens up in front of you you’re already pulling forwards.

I love tarmac rallying. I clicked with it on the Isle of Man (issue 122) and even more so in Ulster (123). I understand and feel comfortable with the grip levels, how the car needs to be driven. As a result I was up at the top end of the stage times and that is a really lovely feeling. But if you’d asked me to conjure up an image of rallying this time last year, before I’d started all this, I would have pictured tyres kicking up stones like shrapnel, cars sideways, gliding in a constantly fluctuating state across gravel and dirt. That, to me, was rallying.

After our early exit from the Pirelli Rally back in April, Rally Yorkshire last month was effectively my first gravel event. I learnt a lot and certainly got quicker as the rally went on, but I knew I was still off the pace. I knew I was driving too much like I was on tarmac, too straight, too tense as soon as the car started to slide on the seemingly gripless surface. I was doing what you do as a learner, letting the car drive me.

So I had a think about it all between rallies and decided that the only thing that would change this for the last round of the season was more courage – I needed to take a leap of faith. I needed to trust that I did actually possess some car control and get the car moving around – into, through and out of the corner. And so I came to the Tempest Rally in Surrey with my best steely glare and all the pumped-up confidence I could muster having watched as many inspiring clips on YouTube as I could find. I even listened to my iPod before we set off to get me going.

Amazingly it worked. The first stages were more slippery than a soaped-up eel on a ball- bearing spillage and there was no option but to go sideways. But I was driving the car now, rather than the other way round. It feels like lunacy, committing to a quick corner blind, just trusting that you can react to any slides that might develop. If you’ve ever abseiled, it’s the same as the moment you lean back from the edge and wait for the harness to take your weight. But you have to take that step and believe that you can – if you don’t, then you can’t be a rally driver. And after it’s happened, after you’ve caught the slides and carried more speed than you ever imagined you could, you will find a whole new driving Nirvana.

There were plenty of moments when I really appreciated the yellow band on the steering wheel that tells you where the top is, but suddenly I found confidence swelling in my chest and I was actually smiling as I was driving, endorphins pumping through my blood stream as the car began floating. It felt dangerous but perfect and I began attacking like I hadn’t before, keeping it flat where previously I would have wavered. The three-left into hairpin left was a particular Eureka! moment.

With the new speed came new problems. After a couple of slithers wide, I quickly learnt that you have to get onto the correct side of the road’s camber before you brake for a corner. It’s no good taking the wide, circuit line because the car will be on the wrong side of the crown of the road and get sucked inexorably away from the apex. You need to be locked onto the inside camber and then you can find wonderful, almost spooky amounts of grip. You need to be fearfully precise with your slides too, because the little Suzuki’s 123bhp will struggle to pull you back from an incorrect line.

The fourth and fifth stages were less slippery but longer and more violent: big, fast jumps and scores of potholes that had the suspension smashing into its bumpstops as though you’d just driven into a kerb at 70mph. Mechanical sympathy would have made me slow down at the start of the season, but now I know what a sledge-hammering the car can take, so despite it sounding like a war zone and the base of my skull jarring with every impact, I didn’t lift. It paid off, too. We were finally matching stage times and even beating Nicholl, Rowland Forde and Bjerg.

Oh, and a certain Loris Capirossi! The smiling, diminutive, down-to-earth and very friendly MotoGP rider was driving a guest car and doing so incredibly quickly. I had a chat to him and it turns out that he adores cars, owning amongst other things a Carrera GT, an SLR and an Integrale that he’s tuned and converted to rear-wheel drive for drifting competitions in Italy. He was also amazed how fun a little Swift could be to drive!

One person I wasn’t going to beat was Mark Gamble, the championship’s very worthy winner. He might have had his offs, but he is insanely quick. I remember talking to Dane Niki Bjerg (himself the winner of the young drivers’ competition) standing at the burger van in the Isle of Man between stages. We both said we’d driven as hard as we could through the previous stage and yet Mark had still taken a stunning number of seconds out of us. Niki was incredulous and it made me shiver knowing the heart-stopping sections that Mark would have been making up the time on.

The Tempest is effectively my home rally. On one particularly long road section linking stages I found Chris telling me to drive along roads I had grown up on. Where 20 years ago I was being driven to primary school in short trousers looking out of the back window of our big silver Volvo 240 estate, now I was driving a rally car. Funny how things work out.

My parents and friends had come along to watch for the first time and it was nice to have them there when we got back into service. Although my mother looked white as a sheet for most of the day (which made me feel a bit guilty) she could obviously see how much it meant to me and said that if she’d had the £12,000 needed to get me onto the Wales Rally GB start list, she would have given it to me.

By the time the last two stages came around (repeats of stages 4 and 5) the ground was more cut-up than ever and Alan and Richard from Monster Sport put the car’s ride height up by 10mm. My gentler start as I found my feet in the morning’s early stages meant Chris and I were still behind Bjerg and Rowland on the time sheets, both of whom I needed to beat by two points if I was to get third in the championship. Nothing for it but to take a brave pill.

‘Ash’ has a big jump about a mile in, and as we hit it flat-out the car canted over in the air and flew for what seemed like miles. Yet I didn’t feel nervous, I wasn’t worried about the landing, just glad that we were going as fast as we could. The stage was undoubtedly my best yet and it felt good to be attacking. The fear of the unknown had left me and I was just seeing a whole new world of possibility for gaining time.

It was a shame therefore to end up beached two corners from the end of the stage. I was a foot too far out going into a two-right that I needed to cut. The camber dragged us wide until the rear hit the scenery and spun us around. Eight times out of ten we’d have simply reversed out and carried on, but even with the efforts of half a dozen spectators we couldn’t extract the Suzuki from the sludge. So we were left to watch the remaining cars from the sidelines until the stage closed and a Mitsubishi Shogun towed us the required couple of yards out so that we could drive back to service.

In some ways it was an ignominious end to the year as my muddy Swift went up onto the transporter. Yet I was elated. As far as I was concerned the rally had been a huge success, fitting the final major piece into my rally-driving armoury as I came to understand what it takes to drive fast on the loose. Ten months after I took my licence exam at the Phil Price Rally School, it felt like I’d graduated.

I’m also completely and utterly hooked. The Swift Sport Cup has been the best thing I’ve ever done. Not just involving cars, but ever. I’m hoping this won’t be the last you see of team Brooks-Catchpole – after all, it would be a shame to let all that experience go to waste…

Scroll through the images to find the 10 images of the year.