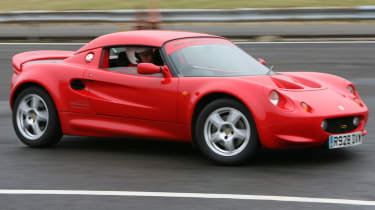 A few months back I had bit of a prang. You may have seen the end result, and read about me knocking Team Propellerheads out of the Grand Challenge.

It was a very gutting moment. In nearly five years of driving I’d not had a crash, or even come close to one, so haphazardly writing off a BMW was a big shock. My next move was clear – get some advanced driver training.

As a result I spent a full day with CAT Driver Training. It was a lovely mixed bag of a course, beginning with motorway work in a Ford Focus and ending with me throwing a Lotus Elise around a tight handling course.

I began by driving to little or no instruction to enable my tutor, Colin Hoad, to complete an appraisal of my current road driving. I was driving a 2-litre Focus (pictured, right), an incredibly easy car to drive smoothly, which instantly eased nerves and I felt I put in a good show to represent the current state of my driving.

After a rundown of faults – working on my vision, as well as tweaking mirror checks and how I use lanes on motorways – I was then taught a new system for motorway driving, centring around leaving clear escape routes and looking far, far ahead at other drivers’ (especially those in lorries) behaviour and changing or sticking to lanes accordingly.

It seemed to click, too, and is a sure fire way of keeping concentration up on motorways when it’s all too easy to slip into autopilot.

We then left the M1 and used some twisty, tight roads to work on vision and cornering speeds, and matching the pair together. Colin also explained single-input steering, and I started having a go myself; seeing the limit point, where the road disappears, and gauging where the corner ends up, and applying steering once without needing to correct it until after the apex.

It took a lot of goes before I started to pick it up, but getting it bang on is massively satisfying – and something I worked on later in the Elise. First, though, we headed to Millbrook and worked on high-speed braking techniques in a Subaru Impreza Turbo (pictured, right). Using the Mile Straight I was braking hard from 60, 70, etc up to 120mph and trying to cut past the ABS while doing so, ensuring sharper braking which is useful on track.

I then headed onto the High Speed Bowl in the Impreza to work on driving at much brisker speeds, eventually lapping lane five at 130mph. In the Subaru, with its particularly hard ride, it was fairly tense initially – picking up every bump the highest lane offers. Doing the same exercise in the Focus showed just how a modern rep-mobile irons out imperfections and distances you from high speed.

The day culminated in combining all the techniques on both a handling circuit and Millbrook’s famed Hill Route, driving a Series 1 Elise. It’s the part of the day I’d been looking forward to, and the Lotus didn’t disappoint. It was my first experience of an Elise and fingers crossed it won’t be the last; the instant feeling of lightness, the fantastic steering and the massive satisfaction of getting a corner right – no driver aids, remember.

Using the braking techniques perfected on the Mile Straight and giving single-input steering a go, I was cornering much quicker than I thought possible and learning much more about the car beneath me as a result.

The course I did with CAT was tweaked to me and what I wanted to get out of the day so may differ to what you experience. I highly recommend training with them, though – the content is excellent, the cars are brilliant (great cars, and a useful mix of power, layout and driven wheels) and Colin was a very approachable tutor and, to me at least, worded things in a way that completely made sense and I left the day feeling I’d learned tons.

A day like mine, Advanced Road and Track Development (with three hours at Millbrook) costs £790 if you use CAT’s cars, or £660 if you choose to learn in your own. It sounds pricey, but if you need a confidence boost, want to get into trackdays, or want to learn how to really drive a performance car it is probably money well spent. CAT offers a variety of different courses and options, though, which you can check out at catdrivertraining.co.uk.