12 Reasons to go to Le Mans

Being a petrolhead is enough reason to go, but Le Mans is about so much more than just racing. Richard Porter picks a dozen – chiefly booze-related – highlights 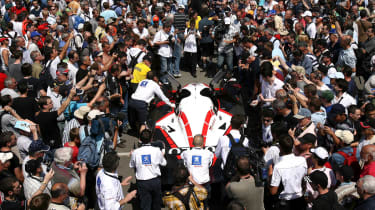 The only conceivable downside is that just before the race weekend the French coppers appear to place recruitment adverts reading: ‘Wanted: More traffic police. Must have bad tempers and enjoy picking on the British.’

You name it, someone will have carted it along and come up with an inventive way to power it. Either that or they’ve just filled a large paddling pool with beer and other alcoholic beverages and planted a massive flag next to it. Either’s good, and both are common.

Alternatively, you could always go down to the Houx roundabout on Friday night, and discover what Armageddon would be like if it was started by complete bell-ends in cars.

5 The build-up to the start

And, unusually for a celebrity type, he doesn’t stick behind VIP lines. Jay Kay seems to like nothing more than vaulting the velvet rope and mingling among the civilians to get up close and personal with the racing action.

A couple of years ago he was even spotted out on some distant campsite, eating home-made chile con carne with a bunch of British lads during the race. Fair play to the little fellow.

10 The early hours of the morning

With renewed respect for the drivers, you find a spot overlooking the entry to a corner and watch brake discs glowing, interspersed with periods of almost eerie silence. Later, you realise that you’ve fallen asleep sitting upright and spilled beer on the retro Gulf jacket.

11 The 6am coffee at Arnage