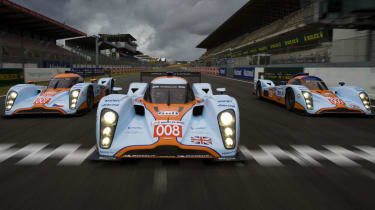 Tomas Enge was one of Aston Martin's LMP1 drivers this year, piloting car number 007 which finished fourth after pushing Audi hard for a podium place. Here he gives us a detailed guided tour of the famous circuit.

I’ve always loved Le Mans - it’s my favourite circuit and I’ve had a lot of success there. I don’t know exactly why I like it so much but I suppose it is because Le Mans is a very fast circuit and the higher the speed the more the adrenaline!

There are actually not so many corners on the Le Mans circuit but the corners that are there tend to be very fast and quite complicated. For any driver, it’s a fantastic challenge. On the start-finish straight we accelerate hard and reach 280kph (174mph) before the first fast right-hander, which we take in sixth gear - either lifting slightly or touching the brake before we turn in. At this point we’re doing around 260kph (162mph) before braking hard into the Dunlop chicane, under the famous bridge.

We take the left-hander in first gear and the right-hander is taken in second, at around 60 to 70kph. It’s very slippery so you normally see a few people slide off here. We accelerate hard and change up through the gears on the run down to Virage de la Chapelle, which is taken in third gear. We then get to one of the most famous corners on the Le Mans circuit, which is Tertre Rouge. This fast right-hander, which we take at about 200kph (124mph) in fourth gear, leads us on to the legendary Mulsanne straight.

The road has been resurfaced recently so the grip is quite consistent now, even though normally this is a public road. The only thing to watch out for is the ruts that form on each side of the road because of the lorries that regularly drive on it. We’re accelerating all the way down the straight and there is just time to reach about 330kph (205mph) in sixth gear before braking hard for the first Mulsanne chicane. There is a marshal’s post just before the chicane that I use as a braking point. Then we get back onto the Mulsanne and the second chicane is a mirror image of the first one, except it goes in the opposite direction.

Back up to just over 320kph (199mph) on the final part of the Mulsanne and then we brake really hard for the Mulsanne corner, a deceptively tight right-hand corner that is taken in first gear. I normally brake just after the 100-metre board, and this is also a place you can overtake. After Mulsanne corner we head on down to Indianapolis corner via a short straight which has a crest in the middle. At that point we are probably doing about 325kph (202mph). Indianapolis is a second-gear left-hand corner and then we have a very short straight, where we still accelerate to about 200kph, before braking for the right-hand Arnage corner. This can catch a few people out – because you are braking from a relatively low speed, there is not a lot of downforce acting on the car and so you have to brake earlier than you think.

Then we head to my favourite part of the circuit – the Porsche curves. It’s a series of different corners and when you are on new tyres and low fuel it feels like you are just flying through there, it’s an amazing sensation. The key to it is to find a really good rhythm so that the car simply flows. You get to the Porsche curves traveling at around 310kph (193mph) in sixth gear – you have to slow down into fourth gear and around 200kph for the first one but it’s important to do that smoothly as the road is very bumpy and it can easily throw you off. The last of the Porsche curves is particularly nasty – an off-camber left-hander.

It’s important to have a good set-up to be quick through the Porsche curves or the car will just understeer. It’s also important to try and avoid traffic in this part of the circuit, as you can lose a lot of time by being stuck behind someone. I think I will always remember the Porsche curves for my accident during qualifying in 2004, when I was driving a GT1 car. I made a mistake and my car hit the wall, causing a lot of damage. The mechanics did an amazing job to fix everything in about two hours, so I was able to get out again with only 20 minutes of the session remaining. The car was not at 100 per cent but I still managed to put it on pole. It was a very emotional experience.

The last part of the circuit is a short straight towards the Ford chicane – or the pit lane, if you are coming in after the lap. You keep right to head into the pit lane, or go tight-left then tight-right in either first or second gear to negotiate the chicane. Some people get themselves into trouble here, as the quickest way through it is obviously to cut the corners as much as possible by being aggressive with the kerbs. However, you can’t be too aggressive – the kerbs are quite vicious and they can easily throw you off. After that, it’s back onto the pit straight and there are only around 349 laps left if you are doing a full race distance...