You might not take it to the shops, but Radical’s 460bhp SR8LM is fully road-legal, so when it set off for the Nürburgring for an attempt at the production car lap record, we hitched a ride for the journey down 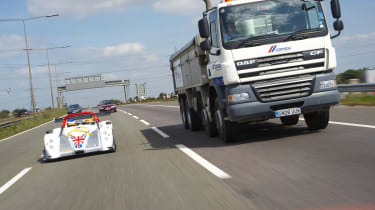 We’ve been here before. Four years ago Michael Vergers and the Radical team obliterated the road legal production car lap record at the Nordschleife, knocking some 20 seconds off the previous mark. I was there to witness the 6min 55sec run. I also heard all the subsequent accusations that the Radical wasn’t a legitimate road car. It was nothing more than a race car with number plates cried some, while a number of German magazines refused to recognise the time as the SR8 hadn’t been put through their TÜV type approval test.

They did have a point. It was a race car, but one that had been through the UK’s Single Vehicle Approval test, transported to the Ring, fitted with road-legal Dunlop Direzza tyres and pointed at the track. The counter argument was that most of the recognised record holders from the German 911 tuners were no different, cars fettled to such a degree they were virtually impossible to use as a regular road car.

None of this, it has to be said, particularly bothered Radical. The press exposure was huge, the video of that lap became a YouTube sensation, and the firm sold a few road cars. Now, though, it’s time to go back, and this time Radical is determined to silence the critics.

This is why I find myself arriving at Radical’s Peterborough factory at 8am on a thankfully sunny and warm August morning. Outside their offices, receiving a final loving polish, is the car I will be travelling to the Nürburgring in, a Radical SR8LM. Its bodywork is quite different to the 2005 car. The aerodynamics have been refined so it now has a nose section not unlike the Peugeot LMP cars familiar from Le Mans, and this one had been decaled with a smattering of Union flags in what looks to me like a two-fingered salute to the old enemy.

Vergers arrives in his old Golf. As affable and relaxed as ever, Radical’s test driver is actually Dutch, but has been living here since he won the Formula Ford Championship in 1990, so he’s been adopted by both the UK and Radical. After a quick look round the car we climb aboard, a task made all the more complicated for me by a fire extinguisher bottle bolted into the footwell ahead of the passenger seat. Once in it’s comfortable enough, even though it looks very cosy in the pictures. We appear connected at the shoulder, but the reality is that the seats are angled away from each other so there’s plenty of space for Vergers to operate the controls without bodily contact.

With the key in and the ignition switch flicked down, Verge fingers the starter button and the 2.8-litre V8 behind us yelps into life. Built by Powertec Engineering, which itself is part of the Radical group, this motor is bigger and more powerful than the unit used last time. Created from superbike technology, utilising the heads, barrels and pistons of the Suzuki Hayabusa’s motor, it generates 460bhp at a heady 10,500rpm while weighing very little. The car as a whole comes in at an anorexic 680kg, giving it a power-to-weight figure of 687bhp/ton. With every blip of the throttle the revs rise and fall with the speed of a drum beat. This is going to be some ride.

Verge pulls on the right-hand shift paddle and there’s a hiss of air and a clunk as the pneumatic system selects first gear in the long-ratio, six-speed transaxle gearbox. He’ll be using the clutch as we potter through Peterborough town centre, but out at the Ring he won’t need it to flick up and down the gears. In town it’s impossible to look inconspicuous in a Radical, so you quickly adapt to being snapped by the camera-phone paparazzi and wave at anyone giving you the thumbs-up.

The ride quality is surprisingly bearable. It’s a bit crashy over potholes, but at 30mph it skims the bumps without jiggling the fillings from my teeth. The ride height has been raised, because the team are determined that accusations of the SR8 being unable to clear speed-bumps will be nullified. The plan is to change nothing on the car now it has left the factory, so the ride height will remain untouched, as will the tyres. To that end they have fitted the hardest compound of Dunlop Direzza available. This particular set was used in a shakedown test at Castle Combe and now they are going to have to withstand the journey to the Ring and all the laps when we get there. In fact, the car hasn’t been altered since it passed the new IVA type approval test, and as this has European recognition there will be less for the critics to go at.

Eventually we reach the A1, and while I’m thankful of my decision to wear a crash helmet I wish I’d put some earplugs in too. Below 6000rpm the V8 has a deep, bassy timbre, but once it’s opened up it grows to a scream and shakes your eardrums like a drill to your brain. It’s unbearable for anything longer than a short blast, but fortunately that’s all it takes to fire us deep into jailbird territory so the pain doesn’t last long. Mixing it with trucks is weird, though, especially as you can look underneath their axles to see the road ahead…

We stop at the Birchanger Green services on the M11 near Stansted and discover that speed bumps cause us no problems, even with my bulk in the passenger seat. It’s much the same at Dover. We get on and off the ferry unaided, with just a couple of scrapes when the front splitter kisses the ramps.

The best part of the journey is saved for last. On the roads close to the Ring we finally get the chance to attack the countryside, and here, on smooth German asphalt, the SR8 really comes alive, its cornering speeds simply obscene. I have never been so fast on a B-road before and, to be honest, I’m not sure I want to experience it again. It’s deeply impressive, yes, but also utterly terrifying, and it strikes me that taking on the most difficult, dangerous and unforgiving circuit in the world in a car as fast as this requires not only nerve but also an incredible level of confidence in both the car and your own ability.

THE FOLLOWING DAY our exclusive track time doesn’t begin until 5pm, and the buzz increases as the crowd grows. Yet Verge couldn’t look more chilled if he was on holiday. Wearing a T-shirt, shorts, shades and flip-flops, he snoozes on a deckchair in the sunshine as the rest of the team get nervous for him.

As 5pm approaches he changes into the clothes he’ll wear for the run: a T-shirt, jeans, gloves, boots and the same helmet he wore four years earlier. ‘It’s a road car,’ he says when I ask why he isn’t going to wear a race suit. ‘It’s the same gear as I’d wear for a trackday, because that’s effectively what this is.’

With a multitude of Chasecam video cameras and timing gear systems gaffer-taped to the car, Verge heads out for his first run. It will only be a single tour, so there will be no full lap time. Instead it’s an opportunity for him to check the balance of the car and re-acquaint himself with the track. Some people say that to be a specialist driver at the Ring you need to drive and race here on a regular basis, but not Verge. The only time he has been here since 2005 was for a couple of laps in a hire car with some friends about a year ago.

He returns complaining of too much oversteer and smiles as I download the camera footage. ‘There were a few tasty video moments there,’ he says as he hops out. The adjustable Intrax dampers are tweaked to improve the balance (the only change the team are allowing themselves), and MV is on his way once more.

Watching record-breaking runs here is an exercise in patience. I was here last year with Black Falcon and their supercars (evo 123) and it was the same. Once the car has disappeared from view there’s nothing to do but mill around and wait for it to come back. You’ve no news of the drama, the on-limit commitment, the jumps, the compressions, the flat-out blasts under the trees with the low sun filtering through the branches – or the blinding sections when Vergers is charging directly at it.

When he does reappear, he’s happier with the balance and ready for a timed run. This time we’re treated to a 168mph screaming fly-past, but mostly we’re waiting again. Vergers has clocked a time, but he made a big mistake at the very first corner, losing concentration after he switched on the timing gear. He reckons he’s eclipsed his previous record, but wants to go again. There’s time for just one more run before the track closes, so he’s straight back out.

Eventually he returns and when the data is downloaded and the lap time extrapolated it reveals an extraordinary time. Six minutes, forty-eight seconds. A new record lap at an average speed of 112.9mph. Point well and truly proved.

What makes a record?

This is because the bulk of the times are set during industry pool days when it would be dangerous to pass the old pit exit at full speed. Accordingly, the lap starts at the old pitlane exit and ends just after the final corner, missing out the 200 metres or so of the old pit straight, so this section has to deducted from the data later.

Supercar lap smashed too!Radical hasn’t been the only one going very fast at the Ring recently. Gumpert was there the week before with the Apollo Sport, which, in the hands of Florian Gruber (a class winner in the 2009 24-hour race), recorded a time of 7min 11.5sec. That’s a massive 11sec ahead of the next quickest supercar, the Dodge Viper SRT-10.

The Gumpert’s 4.2-litre, twin-turbocharged Audi engine develops 700bhp and 645lb ft in Sport trim, while extra wings front and rear increase the car’s downforce. If you fancy having a go at beating Gruber’s time yourself, an Apollo Sport can be yours for £390,000.