It’s been a vintage year for those super-fast, super-expensive, super-supercars that can only be called hypercars. Here’s our countdown of the top ten 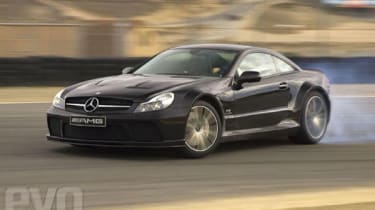 10 Mercedes SL65 BlackThe price of the SL65 AMG Black Series might appear to be chicken feed compared with the others in this list, but then you remember that you are essentially paying a quarter of a million pounds for a Mercedes SL.

That said, it does look menacing enough to be Darth Vader’s personal runabout, and at 661bhp it is also the most powerful road car that Mercedes-Benz has ever produced (besting the SLR McLaren by a breezy 20bhp). The stripped-out interior, fixed carbonfibre roof and fixed-back bucket seats make it feel race-car rigid and you wonder if there is enough headroom under the arches for the huge, spidery wheels to move at all, but somehow AMG makes it all work.

9 Tramontana R EditionWith a power-to-weight ratio of 580bhp per ton, the Tramontana’s numbers are very impressive. Certainly impressive enough to merit it a place in this line-up. But it was always destined to finish near the bottom of our top ten. Why? Well, just look at it.

If you were being kind you’d say that it is mad and crazy. If you were being truthful, like John Barker, you would say it’s fugly.  Never mind; it uses a 720bhp version of Mercedes’ twin-turbo V12, a carbonfibre chassis and race-car suspension.

It’s just a shame that it’s so impractical. Other unfortunate details include the passenger seat that’s squeezed in behind the driver’s. So no turning up to swanky events with a beautiful girl in a long dress unless she’s following in a taxi. Although she might make an exception if you went for the 1million euro diamond-encrusted interior version…

8 9FF GT9RAcceleration is what the GT9R is all about. Not your conventional 0-60 because, as we discovered when we figured the non-R version, it’s a bit tricky getting over 1000bhp hooked up through the rear wheels and, if you don’t get it right, you’re likely to be left watching the Lexus rear lights of a Max Power Corsa beat you away from a standing start. But if you can track that Corsa down again at about 80mph and perform a roll-on acceleration test then the odds will be just a little more in your favour…

Above 100mph the GT9R is quicker than a Veyron. It accelerates from 0-200mph in a Bugatti-beating 24.04sec. When David Vivian drove it he described it as being able to collapse physics. It will even allegedly go on to reach 260mph (it’s already been clocked at 254mph). The R version also adds quite a lot of aero to help it in the corners, but then this car isn’t really about the corners.  It’s a car for those who live their life on airfields.

7 Mercedes SLR Stirling MossMost supercar owners probably rather enjoy the attention they get driving around in something only slightly less attention-grabbing than an explosion. Of course, the trouble with so many supercars is that they slink along at ankle level with small slitty windows and it only becomes clear who’s got the black Amex when the driver parks up and gets out.

So to solve this you have the SLR McLaren Stirling Moss, a car with no roof or windscreen that leaves the driver on display. The downside is that you have to wear a helmet if you want to drive above 30mph and wearing a helmet in a road car generally makes you look like a tit.

Other downsides include the fact that the SLR Stirling was also only available to those who had already bought one of the more regular flavours of SLR. Upsides include less weight and more development by McLaren.

6 Pagani Zonda Cinque  Pagani doesn’t just do carbonfibre, it does the best carbonfibre, perfect carbonfibre, M&S carbonfibre. So where do you go from there? Well, you create an entirely new material that knits together two of the coolest materials known to man and you call it carbo-titanium. That alone was probably a good enough reason for five people to stump up the 1.3million-euro asking price for the Cinque, but the addition of Pagani’s first road-car paddle-shift and the lure of more power, all topped-off with a roof scoop, no doubt sealed the deal.

Unfortunately, the gearbox isn’t actually that good, its shifts being slow and clunky. However, on the plus side the Cinque is probably the best car in this list for doing big skids in and the wheels look like they have rim tape, which is almost as cool as an entirely new composite material.

Of course, the under-the-radar subtlety (in hypercar terms) is part of the appeal of the Sportec. And while the body might look familiar it is in fact made completely out of carbonfibre. Combine this with a rev-limit increased from 6800 to a scarcely believable 8400rpm and you get a power-to-weight ratio nearly double that of a standard Turbo. When we strapped the timing gear to it, the resulting 60-160mph time was 0.8sec faster than a Veyron.

All in all it is a hugely impressive piece of kit backed up by Porsche-like levels of integrity. Sportec is only producing ten, so if it didn’t look like a 911 it would be quite exclusive too.

4 Lamborghini Reventon Roadster  When you were a child you glued three fingers together building an Airfix kit.  When you left university you applied to the RAF.  When the RAF rejected you because you tripped over your shoelaces on the way into the interview you became an accountant.

Twenty years later, when you sold your share in the multinational paperclip business you set up, you decided to buy a car that fulfilled your fantasies of being a fighter pilot. So you bought a Lamborghini Reventón Roadster.  You then revelled in the instrument display binnacle (milled from solid aluminium billet and shrouded in carbonfibre) with its G-meter and choice of digital or quasi-analogue displays.

You obviously ignored the fact that a remarkably similar-looking standard Murciélago could be had for a quarter of the price. What’s more, you obviously didn’t wait until they went on sale in October because, confusingly, by that point all 15 had been sold.

3 Ruf CTR3The highest placed of our 911-based hypercars comes from Ruf, and rather in the same way that Pagani will supply you with a set of shoes from the Pope’s cobbler, every CTR3 comes with a pair of white socks and some slip-ons in recognition of Stefan Roser’s legendary laps of the Nürburgring in the original CTR. Probably.

For the CTR3, Ruf has used the front section from a GT3 RS, but everything from the A-pillars back is new. The 996 Turbo engine has been expanded to 3.7 litres and then mid mounted; the gearbox is a slightly ponderous sequential system operated by a huge manly lever sprouting from the transmission tunnel.

The most incredible thing, however, is not the way the CTR3 accelerates (0-124mph in 9.4sec) but the way it brings Cayman-like handling to the hypercar world. With the engine repositioned ahead of the rear axle but the overall length of the car remaining the same as a 911 there is a new-found level of accessibility. ‘It’s gun-it-and-go raised to supernatural levels,’ said David Vivian when he drove it. Perhaps it’s time for another lap of the Ring…

2 Aston Martin One-77I say ‘Gold’, you say ‘Finger’. ‘Gold’… Very good. If you’re a James Bond fan and you want to pretend that you’re an MI6 double-0 agent, then Aston’s hypercar will be the one for you.

OK, we didn’t actually drive the One-77 this year but we did have a thoroughly good poke around it. In photographs it can look a little bit too similar to every other Aston Martin from the last ten years, but then Aston hasn’t exactly been producing mingers for a decade and when you see it in the flesh you realise that it looks good enough to make you shiver.  It is so much sleeker and more muscular than a DBS, it’s like comparing an off-the-peg suit with a tailor-made Brioni.

A high-class film-buff brawl could break out, however, as millionaire Spinal Tap fans will want to buy one of the 77 über-Astons purely for the fact that they have dampers that are adjustable in increments from one all the way to eleven.

1 Bugatti Veyron Grand Sport  The Veyron Grand Sport always had a little ‘reserved’ sign on the top spot in our hypercar countdown. It’s almost become easy to overlook the big Bug but as a hypercar it hits the bullseye and then destroys the dartboard. It would be the killer Top Trump card in the pack.

Some might look more glitzy, but when you see a Veyron in the metal you realise that it has a brooding presence that shades anything else in the vicinity. And while other cars in this line-up might accelerate marginally faster between particular speeds they all still look to the Veyron as the benchmark and none of them can replicate the breezy ease with which the Bugatti can rip off a three-second standing start to 60mph.

You might think that in open-top form the Veyron would be a less impressive, but actually the GS rides slightly more firmly, has slightly more feel through the steering and adds a bit more involvement by actually allowing you to hear the monumental whooshes and growls from the quad-turbo W16. It is, without a doubt, our 2009 eHoty.