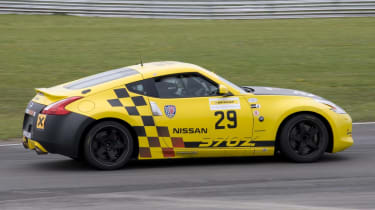 Bricking it. That pretty much sums up how I feel as I trundle down to the collecting area for my first ever motor race. Like nigh on all car-loving folk I’ve dreamed of being a racing driver since I knew such an occupation existed, but never did I expect an opportunity like this to present itself. And now I’m thinking of about four hundred other places I’d rather be right now… My journey from evo desk jockey to a sopping wet Snetterton grid has been a remarkably short one. It started a few weeks ago, with Editor Trott and resident racer Green asking if I’d like to try out the Nissan 370Z racer our dear readers can win a race in (details of our Dunlop Race Academy competition this way). Absolutely, I said. A week later I was filling out my licence application form, swotting up on the rules, regulations and flags and hurriedly booking a medical and my ARDS test. Big thanks to MSV on the latter, who upon hearing my novice status, got me some track time in my Clio Cup long-termer, too (blog on that this way). The path from from trackday-regular to amateur racing driver contains a few more obstacles than you might imagine. Still, ARDS test calmly passed and licence acquired, everything was now very real. I sorted out a bit of tuition with evo’s advanced driving expert, Colin Hoad, and advanced Mr Kipling expert, Richard Meaden, and several hours of Caterham-based fun later, felt almost ready to race. My race weekend began yesterday, Friday afternoon, meeting RJN Motorsport – my able and amicable racing team – and having a quick test session in the car. Forty minutes was less than ideal, but in Snett’s soggy conditions I did learn that I can’t use race brakes without locking them, and that I struggle in the wet without traction control. In short, I’m a bit rubbish. Confidence dipped, I retired home for the night. A surprisingly sound night’s sleep saw me start qualifying much chirpier this morning, though despite ABS and TC intervention to keep me in check, I still qualified last. And that’s where I now sit on the grid, waiting for the race to begin and watching the increasingly heavy rain with some trepidation. Lights out. My first standing start isn’t perfect, but at least there’s no one behind to worry about. I spend the next 20 minutes slipping gradually further from the pack, but you know what? It’s fantastic. While I’m not tussling for places, I’m competing with myself, confidence climbing every lap and despite the worsening weather, my speed out of corners is increasing as I find handier lines and the balls to apply the Zed’s power earlier.  The gravel-trapping of another car means I finish 12th out of 13. Still technically last, but at least it’s not a dreaded DNF. Car brought home safe, racing cherry popped, grinning from ear to ear. Bring on tomorrow’s pair of races… Stay tuned for part two, when I compete in my final two races and work out whether I’m racing driver material or not. If you fancy a go in the same car, racing in another round of the Dunlop Sport Maxx cup, enter our competition. Details this way…