evo's Rick Pearson aimed for a special speed record on the Bonneville Salt Flats. How did he get on? 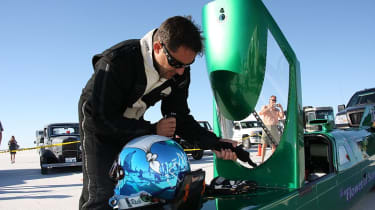 As I’m sure you will have read here, the Speed Scotland team went off to Bonneville for Speed Week this year with high hopes that we could set a new Land Speed Record for a car with a 1-litre engine.

For the rest of the crew bar myself it was a first visit to The Salt and they shuffled around like penguins as their brains told them it had to be snow and therefore slippery. For me it was an emotional return having visited as a tourist last year and been determined to come back and drive.

'Tech inspection' passed without a hitch on the Friday and come the opening of the Salt on Saturday we were lined up and managed to run 3 good passes to lose my rookie status and qualify me for my first two licences (125mph-150mph and 150-175mph). We had some pretty terrible vibrations from the car though: the front wheels refusing to follow orders plus my vision was so blurred at anything over about 130mph it was terrifying. The learning curve was also steep: laying flat on my back in a car I’d never steered or changed gear in, I went from 0 to 170mph in the first mile. All this on a surface I’d not really understood in terms of grip before.

So Sunday we tore the car apart and made a big improvement to the handling (and also took a lot of the Methanol fumes out of the cockpit) but on our only run there was vibration in the back of the car: gearbox failure had split the casing and destroyed the engine.

Fresh engine installed for Monday, which let us make a 200mph pass (peak speed 215mph) before pulling the chutes before the three-mile mark in order to avoid breaking my 200mph permitted limit, so the third license step was achieved but we then blew another gearbox and engine with the first pass on Tuesday.

Despite fetching parts personally from the California coast and the crew working flat out for two days with various issues we ended up with time for just one last run before Speed Week closed on the Friday.

I’ll concede that I was pretty nervous knowing I’d one shot to take her 100mph faster than I’d ever driven before, in marginal wind conditions. She went off the push truck well, took second gear and picked up and ran hard. But approaching 250mph there was a small 'pop' from the motor we’d built up in a local Casino car park. It was just too makeshift to take the boost.

We were all pretty down, but we’ll be back in 2011 and taking the record will be that much sweeter after this year’s trials!