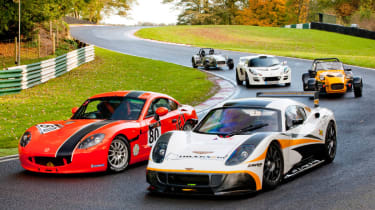 25
The gods appear to be smiling on us. An eye-squintingly bright yellow blob has clambered its way above the horizon and the heavy overnight clouds have finally lifted to reveal a promisingly azure colour scheme. Long, autumnal shadows are now being thrown over Cadwell Park’s small upper paddock, and on this leaf-strewn tarmac strip a motley collection of transporters are slowly disgorging their contents. The captivating mix of emerging shapes dispels any lingering sleepiness. Laid out in front of us are the best new trackday machines of the year, while the UK’s ‘mini Nürburgring’ is all ours until the sun completes its arc and the Wolds become cloaked in darkness once more. Welcome to Track Car of the Year 2010. This should be fun. Some of the shapes are completely new, some as familiar as your favourite pair of old race boots, but all are pure trackday machines. In past years we’ve included everything from hot hatches to supercars in our annual round-up, but as Cadwell has already been visited by the main eCoty group we’re breaking from tradition and keeping things pure this time.  This new format has effectively turned this test into a battle of the Brits, for no other country has such a large industry based around the thrill of circuit driving. All these machines are affordable, lightweight and way faster than road cars costing at least twice as much. They are all produced with the sole aim of providing joy and entertainment by the bucket-load, irrespective of driver ability. And speaking of ability, this year’s judging panel can lay claim to victories in the 24-hour races at Le Mans and Daytona, race wins in the BTCC and a Nürburgring lap record. Sadly none of those achievements is mine, though I did once nearly win a race at Cadwell in a Radical SR8, so at least I know which way the track goes. Which gives me some sort of advantage over Andy Wallace. He says he’ll need a couple of sighting laps to refresh the memory banks as he hasn’t been here since 1984. Mind you, the 1988 Le Mans winner did score his first ever race win here in ’81. ‘This paddock was all grass back then, and I think I pitched my tent just there,’ he says, pointing at where Phil Bennett is standing. ‘Flat-out Phil’ has more recent experience of Cadwell’s twists and sharp elevation changes – in between his racing and Ring-record duties he used to treat evo trackday attendees to the fastest passenger rides of their life here. We won’t be setting any lap times today. Instead we’ll be judging the cars purely on how entertaining they are to drive. Despite their vast experience, both Andy and Phil are looking forward to getting stuck in as much as I am, and the Chevron GR8 catches Phil’s eye as it’s lowered on the tail-lift. At close quarters it’s smaller than I expected it to be – like it’s been built to 7/8ths scale – but it looks every inch the hardcore racer. It is perhaps the most extreme of our group, although the equally diminutive Ginetta G40 alongside could well have something to say about that, particularly as it can also be raced by anyone in the Ginetta Junior Championship. As long as you’re between 14 and 17 years of age, that is.

You can have it with more power (Ginetta reckons it can handle 300bhp), but as it is even novice track drivers would soon want more. If you don’t go for extra grunt, we’d recommend forgetting the slicks and fitting it with low-grip fuel-saving tyres instead. The Chevron doesn’t have a power issue, for in the middle of its steel-tube frame sits a Cosworth-tuned 2-litre Duratec lump pushing out 255bhp through a five-speed sequential Hewland transaxle. Created by Vin Malkie, the aim with the GR8 was to produce a modern version of Chevron’s iconic B8, and sitting aboard this similar-scale machine I think he’s achieved it. I drove a B8 a few years back and from the driving seat the GR8 does feel very similar. Your backside is an inch from the deck and the view through the low-raked screen is almost identical. In fact the main difference is that your surroundings feel more substantial – where the delicate B8 felt about as robust as thin cardboard, the GR8 offers modern levels of security. It’s very bare inside, with nothing that adds weight, not even air-con or a heater; you get the feeling they’d have done away with the steering wheel too if they could have found another way of turning the car. The GR8 is comfortably the quickest of our group but it’s also the most intense. You really are at the heart of the action – there’s no slack in anything it does – and while the engine doesn’t produce the most cultured soundtrack, it envelopes you in its angry, rip-snorting bark. With a career built in Sportscars, Wallace feels at home in the GR8. ‘It’s very stable in the quick stuff,’ he says. ‘It feels like it’s producing some useful downforce and there’s good turn-in, excellent traction and it’s very stable under braking.’ Any negatives? ‘On the wish list would be a flat-shift sensor.’ (This would automatically ease the power on full-throttle clutchless upshifts for a smooth gearchange.) Bennett concurs, but adds that the front end is so sharp that the rear occasionally has trouble keeping up. He’d prefer more linearity in the throttle travel too. These are things that can be tailored to suit each individual driver, and the fact that our judges are getting picky is a sure sign that they’re impressed. It’s time to choose a winner. The overall view is that this is a strong group of cars offering markedly different ways of scratching that trackday itch. Ultimately the Westfield and Lotus find themselves towards the bottom of the order, mainly due to the road compromise diluting the final level of detail and interaction. The Exige shades the Sport 225 because of the way it flows around a lap – its precision soon becomes addictive. However, if you want a cost-effective ballistic speed rush, look no further than the Westie. The Ginetta G40, meanwhile, is a frustrating experience, as a potentially great little car is being held back by a listless engine.  Up at the sharp end are the Caterham and the Chevron, and while the R400 is the definitive expression of front-engine rear-drive entertainment, it doesn’t offer anything new or significantly move the marque forward.

The Chevron does, though. It may be the most focused, the most expensive and perhaps a touch exuberant for trackdays, but the GR8 delivers on every level, from the way it looks to the way it sounds and goes. It’s individual and manages to mix ’60s retro with the demands of today’s trackday driver. It was the most compelling contender in this year’s test from the moment it was lowered onto the Cadwell tarmac, and it’s our Track Car of the Year.