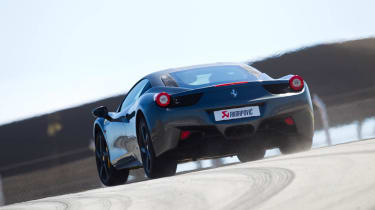 Regular readers will recall that I bought an Akrapovic Evolution titanium exhaust system for my Fast Fleet Nissan GT-R, Godzilla 2. Richard Harfoot of Titanium Performance invited me to the inaugural Akrapovic Driving Experience event held at Portimao race circuit in the Algarve, Portugal. Open to only the most valued customers, dealers and some members of the media, the idea was to showcase some of Portimao’s race school cars equipped with full Akrapovic exhaust systems so guests could experience the sound and performance increases first hand. Fortunately Autodromo do Algarve’s racing school fleet comprises of some fantastic machinery, including the latest BMW M3 Competition, two Porsche 997.2 GT3s and a Nissan GT-R Black Edition. One of the GT3s was completely standard, whilst the other had the Akrapovic installed. I drove the standard one first and was reminded of how the performance feels relatively flat below 4000rpm before the exhaust flap opens triggering a noticeable kick in power up to the redline. In contrast, the Akrapovic equipped Porsche felt stronger all the way through the rev range (the company states a 12bhp/11lb ft increase with a useful 17kg weight saving at the extreme rear of the car) with a powerful, race-car like growl. I particularly like the optional carbon lip/diffuser Akrapovic installed above the considerably larger twin titanium tail pipes. Likewise, the M3 Competition felt way torquier than other E92 M3s I’ve driven, and indeed the brochure states 22bhp and a massive 26lb ft improvement, whilst saving 24kg. The upshot being, the M3 was transformed into the lairy hooligan it had always threatened to be, with Portimao’s numerous blind, off-camber second gear corners becoming a drifter’s paradise as the new found grunt allowed the rear wheels to lose traction across the rev range. I did briefly drive the GT-R, but disappointingly the instructor refused to switch the VDC to R mode, even with himself driving! The constant interruption from the electo-nannies made the drive pointless, but luckily I already know what an Akrapovic-equipped GT-R sounds and feels like, rather well. Final treat for the event, was going out in a customer’s exquisite Ferrari 458 Italia. Unlike the rather high pitched shrieking from a lot of aftermarket Ferrari exhausts, the 458’s Akrapovic was meaty and mellifluous. By far the nicest sounding car I’d heard on the trip despite being there to watch the FIA GT1 race on the Sunday. In conclusion, if power/torque increases, as well as weight savings, are important to you, combined with a distinctively powerful (but TUV compliant) exhaust note – and you can afford the inevitably high price tag – you need an Akrapovic system on your car.