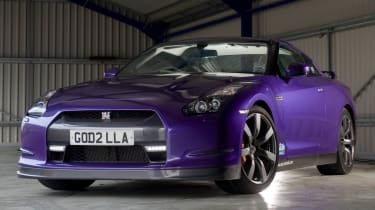 Long-term evo readers may remember Godzilla 1, my 1997 R33 Nissan Skyline GT-R V-spec. The body was a colour called Midnight Purple, the only shade I ever seriously considered, and I continued to love the dark metallic aubergine paint even when the rest of my R33 was grenading around me.

Now, although there were no fewer than three versions of Midnight Purple for the subsequent R34 generation, when I came to spec my new R35 GT-R I was disappointed to find there was no purple at all on the colour chart. (Well, unless you fancy shelling out £125,000 for the Spec V, which is available in Ultimate Opal Black, an ultra-dark purple ‘ChromaFlair’ paint.) I went for Gun Metallic grey instead.

So when vinyl wrapping specialists Creative FX of Bromley (www.fxuk.net) got in touch to ask if I would like to have Godzilla 2 ‘colour changed’ with a wrap, my thoughts immediately turned to purple. Creative FX boss Sean Davis called me in to see a roll of the only metallic purple vinyl available, and in truth it wasn’t that close to Midnight Purple, but it certainly was eye-catching, and as the new livery’s job would be primarily to help the GT-R in its role as promotional vehicle for Auto-Journals.com, Creative FX and, of course, evo, I thought it was worth going with an attention-grabbing colour, so Godzilla 2 was booked in.

The process looks deceptively simple: take a big roll of sticky-backed vinyl and stretch large sections of it over the car a panel at a time. Of course, with the various compound curves and tricky angles on the GT‑R’s bodywork, a great deal of skill is actually needed to get a perfect finish.

I was particularly impressed to find the vinyl was even neatly finished into the door shuts, furthering the illusion that the car had been professionally resprayed. Remarkably, only the rear spoiler and the door mirrors needed to come off the car to get into the intricate crevices, although apparently my recently installed carbon canards on the front bumper were the cause of much muttering and cursing!

Once the coloured vinyl was on and finished, a clear laminate was applied over it to lend the metallic finish a paint-like shine and to protect the colour. Finally, this was waxed with a conventional car wax.

The full process took three days of meticulous work, but the end result is stunning, with most admirers refusing to believe it is a wrap rather than a respray. At a cost of £1800 the advantages over a respray are obvious: 1) it’s cheaper, 2) it protects the original paintwork, 3) it’s easily changeable when the mood takes you, and 4) it doesn’t devalue the car. My only regret is that I didn’t go for a wrap when my paint was brand new and stone-chip-free, as it would have helped keep the paint beneath pristine.

You can see for yourself how good the finish is as Godzilla 2, now aka Purple Zilla, is going to be on display on the PistonHeads stand at January’s Autosport International/PistonHeads show at the NEC.