We've got an exclusive gallery of images from the filming of the new film Rush, which is based on the rivalry of James Hunt and Niki Lauda 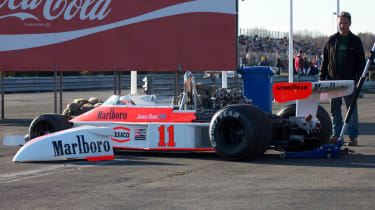 Here's something a bit different - a gallery of pictures captured by evo reader David McFarlane on the location of 'Rush', the forthcoming movie about F1 in the 'seventies, and specifically the rivalry between James Hunt and Niki Lauda.

Earlier this week we brought you this video, shot at the Nurburgring, as Lauda's spectacular crash at the 1976 German Grand Prix was recreated. And now we've got 12 pictures that were captured in the slightly less racey location of Blackbushe airport in Hampshire, which is being used to shoot scenes from the grids of various of the Grands Prix that will feature in the film. According to David, the grid was standing in for Mexico when he went along to get some shots of the action.

The film - directed by Ron Howard - is out later this year and it's fair to say that we're all looking forward to seeing it!