Nearly 30 years after its creation, does the Metro 6R4 still have the power to excite and amaze? 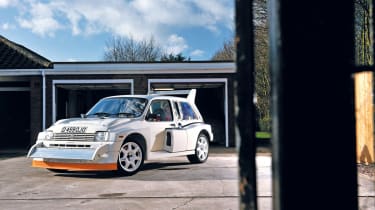 Things like the Mégane R26.R and the Mini GP are quite extreme as road cars go. Most people would get in them and comment on the firm ride and, certainly in the Renault, a lack of creature comforts. But they are soft, mollycoddling, barely tepid hatches compared to the 6R4. Comparing them is like that awkward moment where you spend five minutes regaling someone at a party with a story about the epic two-mile run that you did the previous day (1.7 miles, actually, but you think your GPS is out), before asking if they exercise much and discovering that they’ve just completed their 29th Ironman triathlon (but struggled on the swim so didn’t quite dip under nine hours). In the mental Metro it’s so loud that once you’re moving, conversation is not just difficult, but impossible. Five mpg (yes, five) is normal. Use it in the summer months and within ten minutes you’ll be drenched in sweat due to the heat soak from the engine. This is a car designed purely with competition in mind and sanitised it is not. Thirty seconds in and I love it already.

While the turbo cars might have had a performance advantage, the Metro captured people’s hearts with the noise of its V6. Watch period footage and, particularly while the cars are still out of sight, you’ll notice that the others are noisy and have their distinctive chuffings and whistles, but only the Metro buzzes the stirrup bone in a truly skin-tingling fashion. Not that the soaring musicality of the engine is really in evidence as we pull up at a junction. At low revs, the noise inside the car is a violent cacophony of grumbling diffs and an almost gutturally agricultural engine. Like so many competition cars, the way the noise swells with the lightest brush of the little throttle pedal is conducive to stalling, because it sounds like you’re adding thousands of revs when it’s barely even hundreds. Thankfully I’ve been caught out in the past and learnt my lesson, so manage to shudder away without silence descending.

I’d love to tell you at how many revs the sound changes from thrashing to soaring. I’d guess at about 4k, but I’m concentrating too hard on not driving into one of the massive drainage ditches (that are doing a remarkably good impression of those in Kielder) to notice. Suffice to say that when the V64V gets into its stride, the distinctive bark is absolutely glorious and the thin piece of Perspex between our backs and the engine is about as much use as a  chocolate exhaust. It’s a potentially magnificent way to go deaf. 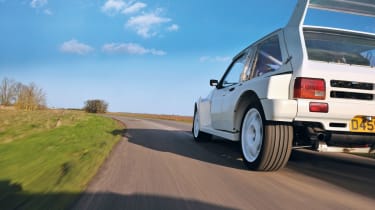 In this standard trim the engine has 250bhp, but with hotter cams and a six-throttle-butterfly intake manifold, the works cars revved past 10,000rpm and put out over 400bhp. Interestingly, though, with 225lb ft the Clubman cars had just 27lb ft less torque than the full-bore International cars. Certainly OJO is still mighty quick with its short rally gearing punching you forwards eagerly, but you can tell that the engine has got even more to give, with an almost artificial ceiling to the revs just when you think they might break free again and step up another level.

Like so much of the minor road network round here, the section of tarmac that we’re on is single-track, but apart from a few telegraph poles there’s nothing rising higher than a badger’s back, so you can see for miles. Despite the low mileage and lack of use, Malcolm isn’t precious about letting the 6R4 be driven properly, encouraging me with unambiguous hand signals to use all the revs in each gear. Given the battle to manhandle it into reverse, the shift between the first three gears is surprisingly good, with quite a short throw to the spindly lever and a nicely positive engagement, although fourth proves rather trickier for some reason.

As I get into a bit of a rhythm and start carrying more speed into a couple of corners, so the brakes become more crucial, and the first time I go for them in earnest is a worrying moment. Although they’re fundamentally strong, they’re also stone cold, unassisted and in need of a disconcertingly sustained heave from my right leg to slow our headlong approach to the ‘90 left, don’t cut’. For all its big wings and box arches, the Metro remains a very small car (as the head of Austin Rover’s motorsport division John Davenport said, ‘a small car makes a small track look bigger’). You can feel the short, foursquare footprint as you dart into corners, all the wheels seeming to move as one and at once; it is wonderfully reactive but you can instantly understand how this could also translate into it spinning like a top.

The torque split is 35/65 front/rear, and although I’m not about to try anything heroically stupid, the short wheelbase again makes it very obvious and the 6R4 drives hard out of bends with a slight squat and with the rear tyres carrying the majority of the load. Equally you can feel the drive to the front wheels corrupting the steering and the whole car tends to tug and wander over cambers, so you can never give it anything less than your full attention.

Coincidentally, it is almost exactly 30 years since the first prototype 6R4 was driven by the legendary Tony Pond (who would later take a factory 6R4 to third place on the 1985 RAC Rally) on an airfield in Oxfordshire. He was quoted in the final sales brochure as saying: ‘The car is very easy to drive – and very fast at only eight-tenths. You would not need to be a top class driver to win with it.’ I can only dream of such luxuriantly moustachioed  talent as the incredible Pond, but even so I think there might have been just a suggestion of a scrap of marketing hyperbole hidden in the ‘very easy to drive’ bit. 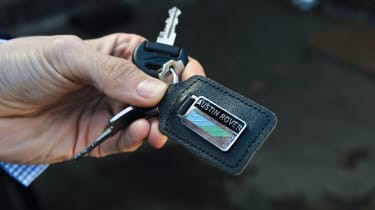 I can barely imagine the effort it must have taken to drive one over the many days and many miles of a world championship tarmac rally like Corsica. If I ever get to drive a 6R4 again I’d love to try one on gravel, as I can imagine the controls would be lighter and the diffs would work in a more obvious way. Although it still wouldn’t be easy, I think it might feel more at home (in my mind it will be sideways and spitting stones into the undergrowth).

For now, though, I’m just elated to have driven a 6R4 at all. To have sat in the centre of all that noise and crazy bodywork as it hurtled down the road. To have felt like I was stepping so perfectly back in time to 1986. To have watched the numbers on the tumbler notch up  a few more miles.

Tiff Needell - 'I love YouTube. Instantly I’m back in 1988, reliving my brief Rallycross career in one of Will Gollop’s Metro 6R4s, Murray Walker urging me on at every turn: ‘Faan-taastic!’

'The 6R4 was one of the lightest and nimblest cars in the field but there was one drawback – it wasn’t turbocharged. While this gave it the most beautiful throttle response, it left it struggling in a straight line, especially on the mad dash to the first corner of the short, intense races. Gollop’s V6 would rev to 10,000rpm, but the problem was knowing whether it related to wheelspin or real speed, and changing up too soon got you engulfed by the pack of turbo cars.

'The Brands layout was great fun and, having survived the nervous Knife Edge, it was the flick out of Hoppy’s Drop back onto the tarmac track that created the longest, curving, opposite-lock powerslides ever. Hard on the brakes, even on the loose, you couldn’t believe the stopping power. That car had everything – except a turbo. Which is why Will added one for the next season.'