evo takes a look around Nissan’s famous Nismo Omori Factory before it closes for good – and examines the role that the UK will be playing in future Nismo products. 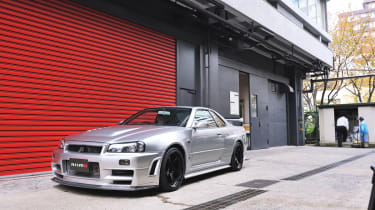 First-time visitors go to the plate glass door on the main street, but true Nismoheads know that it’s behind the mysterious red door down the side street where the good stuff happens. Wearing a white ‘Omori Factory’ logo, complete with a small waving chequered flag, crossing this threshold is akin to walking through the pearly gates if you’re into your Skyline GT-Rs.

Omori Factory is the home of Nismo, Nissan’s world-renowned motorsport division. It might not look it from the outside, but this non-descript office block in the Omori district of Tokyo is every bit as significant as, say, Porsche’s Motorsport Department in Weissach. Or should I say was as significant, for by the time you read this story – indeed just a few days after we fly back to London – the hallowed Omori Factory will have closed its doors for the last time.

You might imagine there would be some kind of emotional ceremony to bring four decades of touring car, GT, rallying, rally raid and 24-hour endurance racing history to a close. Instead the factory’s contents are being quietly packed up and taken away, to be relocated to Nismo’s new state-of-the-art headquarters on an industrial estate in Yokohama. It feels like a rather melancholy moment to visit, but we’re not complaining, for invites to take a glimpse inside this mysterious, legendary place are rare indeed.

So what is Omori Factory, and why is it so sacred? As you’d expect, there are many reasons, but the most culturally significant is its place in Skyline GT-R folklore. Not just its role in developing the GT and touring cars, but as the birthplace of the greatest road-going GT-Rs of all, like the ultra-rare R33 400R and near-mythical R34 Z-tune.

Proof of this enduring link with old-school Skylines comes in the form of the unmistakable pulse of an idling RB26-powered model, big-bore exhausts sending tremors and low-frequency vibrations through the ground floor. Throughout the day numerous GT-Rs arrive for tuning work, servicing, or just a photograph outside the bright red workshop doors. For your average GT-R owner, the drive-in workshop is the heart of Omori Factory, for it’s here that Nismo will bestow greatness on your car, be it an R32, R33 or R34 GT-R, the current R35 GT-R or even a 370Z.

It’s a mark of how seriously Japanese owners take their ageing Skyline GT-Rs that they still form the backbone of Omori’s tuning business, a decade or more since the RB26 straight-six made way for the new VQ twin-turbo V6. Speak to any of the technicians and they all go misty-eyed over the RB26 engine, talking in reverential tones about the performance it could deliver, and its unique character. For them it will always have sacred status.

There’s an endless array of RB26 build options, from basic refreshed engines to big-bore 2.8-litre motors built to endurance specification so that they can deliver more than 500bhp day in, day out, lap after lap. Even if you’re not a GT-R geek, you have to admire the passion, expertise and obsessive attention to detail that exists within the people who work here and the cars they create.

Across the side street from the main building are some storage units, which are being emptied prior to the move to the new HQ. Inside is an absolute treasure trove of rare Nismo parts. There are spare wheels and tyres for an extraordinary range of machines, including – somewhat unexpectedly – the Primera GT that won the BTCC title in 1999. Doors from old Japanese Super GT cars, complete with brown scorch-marks from the side-exit exhausts, sit propped against the wall, while a stack of clear plastic boxes reveal dozens of neatly packed race suits from bygone seasons.

Back in the main building, once you head up from street level it’s easy to see why Nismo is moving, for this is not an ideal home for any race team, let alone one with the size and importance of Nissan’s motorsport department. Originally an office block, Omori Factory is spread over seven storeys, fed by a central car-sized lift. It’s not unusual to hear the doors ping open and an R35 GT-R Super GT car to be pushed out like it’s the most natural thing in the world. This curious place has been the heart of Nissan’s racing activity since before Nismo was formed, with many of the most experienced technicians still here after more than 30 years’ service. It’s about as far removed from Ron Dennis’s Tracy Island-style McLaren Technology Centre as you can possibly imagine, and all the cooler for it.

As we progress floor by floor, we encounter more and more bizarre, breathtaking sights. On one level we walk round a corner to find Nissan’s Daytona-winning Group C/IMSA car in pieces, its iconic blue, white and red bodywork still bearing the scars, cracks and tyre swirls from its 24-hour battle. Behind it sits a GT3-spec R35 GT-R test and development car, engine removed and a new aero kit plain for all to see.

In the engine room we find literally dozens of RB26 powerplants in various states of completion, parts laid out in meticulous rows on metal benches. Alongside them are a couple of early 2-litre straight-six motors from the holy Hakosuka (‘boxy Skyline’) cars of the late 1960s and 70s, their triple carburettor assemblies providing an old-school contrast to the LMP2 V8s that also occupy shelf space.

Restoration of Nissan’s historic motorsport collection also takes place here – at the moment there’s a beautiful mid-engined R380 sports car from the ’60s (think Japanese Chevron B8) being painted in the spray booth. At every turn you trip over something amazing and unexpected. Outside the carbon composite workshop sits an exquisite wind tunnel model of the R35 GT-R Super GT racer. Five minutes later we’re looking at one of the real things, a squad of technicians stripping and cleaning the brakes, while another team tends to a Nismo Leaf. Just for fun we take a ride in the car lift, emerging onto the roof to discover a car park, in one corner of which sits a standard R32 GT-R road car.

It’s a strange, quirky place to run a brand like Nismo, but it’s a great place too. When quizzed on their feelings about moving to a new ‘home’, the old-timers who have spent the entirety of their careers at Omori Factory are wistful, but also positive. They’re almost a part of the fabric of this weird and wonderful building, yet they readily concede the working environment will be better and more productive at the new HQ. And for them, working better means creating faster cars.

It’s hard to imagine the all-new 21st-century facility ever acquiring the same charm as the old one, but it’s an essential step in the reinvention and revitalisation of Nismo. The future beckons, but Nissan has been careful not to erase all traces of the past. The name of this all-new Nismo headquarters? Omori Factory of course. RM

While NISMO remains one of Nissan’s prized  possessions in Japan, British engineers are set to play an increasing role in producing the sub-brand’s road-going performance models for the European market.

That’s down to the quiet but continued success of the Nissan Technical Centre Europe (NTCE), a sprawling complex in Cranfield, near Milton Keynes. It’s probably the most important bit of the British motor industry that you’ve never heard of, having led development of Nissan’s European models since 1991 and now employing 640 people. When Nissan in Japan decided it would be necessary to get local input into the development of its Nismo models for Europe, Cranfield was the first place it turned to.

Cranfield has previous experience with performance Nissans, including some work on the European specification of the GT-R and, back in 2003, helping to optimise the Nismo handling pack that was offered on the 350Z. The idea of producing a Nismo version of the Juke (driven in this issue – see page 36) was first floated in Cranfield in February 2011, with development properly starting in December that year. Cranfield was in constant dialogue with Nismo’s engineering team in Japan throughout, and it was the first time that engineers outside Nismo’s core team had been allowed to work on one of its road cars.

Nismo is run as a separate business within Nissan, with its own management team. This enabled it to cut out some intermediate levels of bureaucracy and to deal directly with the specialised team of British-based engineers on the Juke, many of whom had previous experience working on other hot hatch projects. We’re told that this is seen as being the model for future collaboration, with Nismo’s senior executives keeping a very close eye on anything that wears the company’s branding.

This also creates an interesting situation for the wider Nissan-Renault empire, as it now has two separate teams working on the development of performance derivatives in Europe – NTCE in the UK and Renaultsport in France. That’s a dynamic that’s likely to get increasingly intense as both organisations work on cars built on shared architectures. The recent Juke RC prototype has already demonstrated a keen appetite for an even hotter Nismo Juke, which could result in the start of an arms race. Let’s hope so. MD