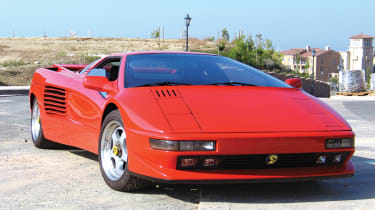 When wealthy businessman Claudio Zampolli, whose day job was selling and servicing Italian exotica in LA, got together with music composer/producer car nut Giorgio Moroder and ex-Lamborghini styling god Marcello Gandini to show the folk at Maranello and Sant’Agata how it was done, there wasn’t much in the way of holding back. With the help of a group of ex-Lamborghini employees, they created a modest monster of a supercar called the Cizeta-Moroder V16T.

That the Cizeta had a 6.0-litre V16 engine was gobsmacking enough, but mounting it transversely made it one of the widest cars ever produced. The engine was actually two flat-plane V8s sharing a single block, the longitudinal transmission taking its input from the middle of the engine in a ‘T’ configuration. The motor was quite something, though, delivering its 560bhp at 8000rpm. Cizeta claimed 4.4sec to 60mph and a top speed of 204mph. And for anyone who’d ever wondered what 16 cylinders, four camshafts and 64 valves might sound like at full noise, the Cizeta provided the answer: simply awesome.

Why did it look so much like a Diablo? Because it was pretty much Gandini’s original design for that car. And it’s how the Diablo would have looked had it not been ‘modified’ by another design team when Chrysler took control of Lamborghini in 1987. More than a little miffed by this, Marcello saw an opportunity to give the world his Diablo ‘director’s cut’ with the Cizeta.

Although nine Cizetas were made, the company’s viability looked increasingly suspect, all the more so when a frustrated Moroder and his money walked away, causing production to cease in 1995. Zampolli revived the design with a roadster in 2005 and promised more would follow. Little has been heard since.