Will the new turbocharged Ferrari 488 see interest grow in its naturally-aspirated predecessors? 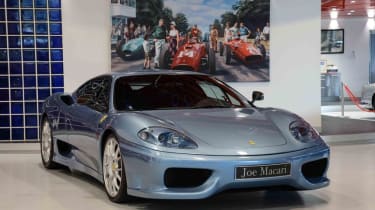 You won’t have failed to notice the direction that Porsche 996 GT3 RS prices have been going recently.

Porsche’s seminal watercooled performance car cost £84,320 when it debuted in 2003, yet it’s not unusual to find examples cresting the £200,000 mark on today’s market. As well as a stunning performance car, the RS has proved a spectacular investment for owners too.

Ferrari’s closest competition at the GT3’s introduction came in the form of the 360 Challenge Stradale. Lighter, louder and leaner than the standard 360, its £133,025 price made the Porsche look like a bargain at the time – particularly when the RS won its group test against the 360 in evo 068.

Today, the tables are turned. Challenge Stradale prices are definitely on an upward sweep, but it’s still possible to find examples for less than the cost of their modern-day successor – in this case, the new Ferrari 488 GTB.

Okay, so the 488 doesn’t directly replace the 360 CS – not until a ‘Speciale’ or ‘Scuderia’ version arrives – but it’s still a V8, mid-engined Ferrari. The march of progress means that in performance terms, the 488 is in a different league to the hardcore CS, but the 2003 supercar is still a hugely appealing vehicle. 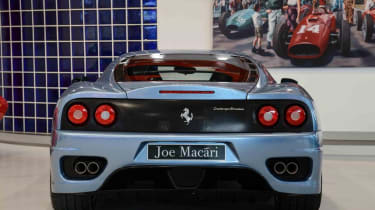 We found this example for sale at Joe Macari Performance Cars in Wandsworth via our sister site, Classic and Performance Car. At £165,000 it’s significantly more valuable than a regular 360 – examples of which start at around £50,000 – but the left-hand drive car’s 23,750 miles mean it’s still relatively fresh.

Azzuro California is an unusual colour for a 360 CS, and while this car lacks the distinctive tricolore racing stripe, the original owner specified the rare lexan windows with race-style sliding elements.

The interior is finished in black Alcantara – around carbonfibre shells, on the seats – and the car has both a (road legal) roll bar and a set of blue OMP racing harnesses.

So is it worth it? Financially, it’s hard to bet against prices going up further. Ferrari had already moved onto paddleshift gearboxes by the CS’s, but the firm’s turbocharged future means its screaming naturally-aspirated V8s may now  become as valued as manual-transmission Porsche GT3s. 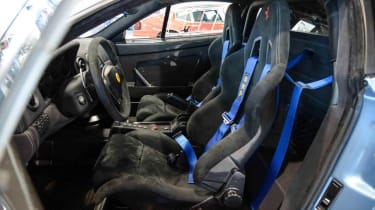 And to drive, that V8 – developing 420bhp at 8500rpm – is something of a defining feature. In evo 059, our description was vivid; ‘The way the Stradale leaps forward is astonishing, and the sound it makes in the process utterly deafening. It starts as a hollow, inflammable gargle… then, as 6000rpm approaches, it ignites with a wince-inducing shriek that grows and grows in intensity until, at 8000rpm, your hearing literally (and painfully) begins to distort.’

The handling too was special. If not quite enough to defeat the GT3 RS a few issues later, it was enough to secure the win against the regular GT3. In the end, we opted for the ‘raw, nefarious thrills of a racecar on the road’ that defined the CS experience.

Ferrari’s 488 has taken the mid-engined V8 to new heights, but that turbocharging will always separate it from the firm’s unbroken line of searing naturally-aspirated V8s. Of those, the CS remains one of the most intoxicating.

> Find Ferrari 360s for sale on Classic and Performance Car