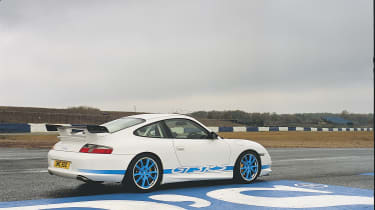 If you haven’t read our review of the latest Porsche 911 GT3 RS, now is the time to do so. The car is predictably spectacular, mixing all the usual 911 qualities with extra performance, poise, grip and, importantly, steering feel.

These are all qualities that have come to represent the range-topping RS models of each 911 generation, first represented in the modern era by the 996 GT3 RS, which was launched in 2003. But even that model’s roots go further back, first to the debut of the 996 itself in 1997 and then to the first GT3 of 1999.

The former was the first 911 to sport a watercooled engine. The latter was also water-cooled, but its legendary 3.6-litre ‘Mezger’ unit was more similar to that of the Porsche 962’s racing engine than it was the recently-introduced 3.4 of the Carrera. GT3 models also shed weight through reduced sound insulation material, the deletion of rear seats, air conditioning and various other treatments.

Customers could reinstall some of these lost trinkets, but they could also specify a Clubsport package that introduced a half-roll-cage, a six-point harness for the fixed-back Recaro driver’s seat, a single-mass flywheel and fire extinguisher. This, more than anything else, set the scene for the RS that would follow four years later.

In the interim, Porsche had facelifted the 996, swapping its ‘fried egg’ headlights for something a little sharper, and the GT3’s styling had also changed. This model formed the basis of the 996.2 GT3 RS. Its fixed rear wing grew to race car proportions, extra vents appeared at the top of the front bumper and racing stripes with GT3 RS script adorned the car’s flanks – they were colour-matched to distinctive alloy wheels of 8.5 x 18in up front and 11.5 x 18in at the rear. 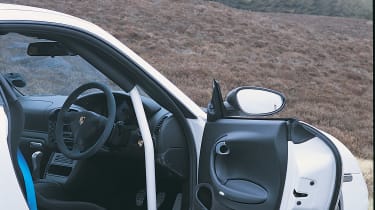 These were wrapped in 235/40 ZR18 Pirelli P Zero Corsas at the front and matching 295/30 ZR18 tyres at the rear. The suspension was optimised over the regular GT3 too. Mounting points changed and the mounts themselves were stiffer, with FIA homologation in mind. There was a more extensive roll-cage than Clubsport-equipped GT3s too, yet weight dropped by 50kg to 1330kg.

Reduced mass was advantageous to the car’s performance, since power and torque remained identical to the 996.2 GT3. Maximum outputs of 375bhp at 7400rpm and 284lb ft from 5000rpm look insignificant next to the latest RS’s 493bhp and 339lb ft, but they still carried the RS to 60mph in 4.2 seconds and on to 190mph.

As ever, it was the nature rather than the quantity of the performance that defined the RS experience. The regular 996.2 GT3 was a spectacular car but still disappointed in some areas – it didn’t quite flow like the original GT3 and featured the once-familiar 911 ‘bobbing’ at the front axle in certain road conditions.

The RS corrected these foibles. The bob was banished thanks to firmed springs and dampers, yet the suspension retained a degree of pliancy. Richard Meaden, driving the RS in evo 068, takes up the story:

‘The controls are a model of tactile consistency. The brakes have hard, linear bite, and the gearshift slides with tight, defined precision.’ Former evo motoring editor John Barker was also positive. ‘The steering wheel is a bit big but the feel through it is superb and the nose tucks in with an alacrity missing from the current GT3.’ There was little wrong with the engine to begin with, with precise throttle response and ‘howling’ top-end power. 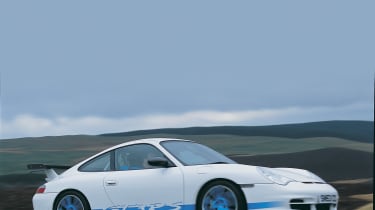 In that same issue, the RS comfortably toppled its assembled rivals, all of which were there to represent driving purity – the Lotus Exige S2, Noble M400 and even a Ferrari 360 Challenge Stradale. Indeed, we went as far as hinting that it might be the ‘perfect car’ from a purely evo perspective, though we never got to test that theory as the 996 GT3 RS never actually featured in an evo Car of the year test.

The same cannot be said for subsequent GT3 RS models. In 2007, the first-generation 997 GT3 RS took victory, ahead of the Ferrari 430 Scuderia and Audi R8. Then, in 2010, the second-gen 997 GT3 RS once again beat Italian competition in the form of the Ferrari 458 Italia. The blistering RS 4.0 repeated this feat a year later.

In other words, the RS has walked away with victory in every eCoty in which one has competed – and regular GT3s have taken further victories in 2003 and 2013. This year’s eCoty is currently in the planning stage, and drawing up a shortlist is more difficult than ever. The latest GT3 RS is by no means guaranteed victory given some of our possible contenders, but if historical precedence is anything to go by, those contenders have a real fight on their hands.

As for the 996 GT3 RS, its place in history is already secured. Rarity, status and ability have already led to soaring prices. It's not unusual to find examples on sale for far more than a brand-new 991 GT3 RS commands (£131,296), and those numbers are only likely to climb unless the bottom falls out of the prestige car market.

> Find Porsche 996s for sale on Classic and Performance Car

It's great news for existing owners, though their desire to take their machines on track may wane as values climb. But for less-moneyed enthusiasts, the cars will soon be as far out of reach as other iconic 911s like the 2.7 RS and 964 RS. The former have already crested half a million pounds, the latter is close to the £200,000 mark.

If you need any further excuse to get behind the wheel of the latest GT3 RS, it's that it's sure to be another appreciating asset, given enough time – even if it's only supplied with a PDK transmission and retains electrically-assisted steering. Just don't forget to enjoy its talents in the meantime. 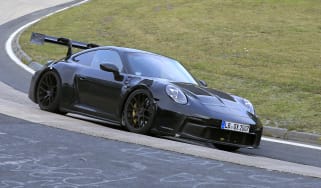 Porsche’s skunkworks motorsport department, Manthey Racing, has developed the 991.2 Porsche 911 GT3 RS to be even more track focussed than before.