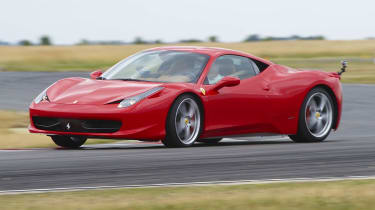 Seems Ferrari has finally admitted there is a fault with its new 458 Italia supercar after several customer cars caught fire for (seemingly) no particular reason. When photographs of burning Ferrari 458 models started to appear on various websites around the world, Ferrari engineers flew to inspect the five burnt out cars, the incidents happening in France, the USA, Switzerland and China. Their conclusion was that the cause of these fires could be traced to the adhesive Ferrari had used to hold the rear, inner wheel arch liners in position. The job of these liners is to keep all the road dirt picked up by the wheels from entering the engine compartment but, in extreme cases, the heat from the engine can cause these liners to deform and move closer to the engine, causing the adhesive to catch fire. This soon caused other components to start combusting and this is how several Ferrari 458s have been destroyed by fire. As a result, Ferrari is recalling all 1248 Ferrari 458 Italias it’s sold, to have new rear inner wheel arch liners fitted at local dealers. These liners will be retained using ‘mechanical devices’, rather than glue to stop this from ever happening again. The five cars destroyed by these fires are going to be replaced free of charge by Ferrari, as soon as new cars can be built. It should also be pointed out none of the fifty 458 models here in the UK have been affected by this particular fault.

See our video of the Ferrari 458 Italia on track

All of our 458 Italia road tests and videos