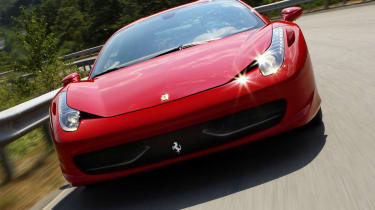 Ferrari has revealed some new pictures of its rather tremendous new 458 Italia supercar. We’d already been stunned by the  car's initial unveil, but those fancy renderings have now been superceded by photographs of the actual car, including some moving shots.

It’s certainly a striking thing, with more than a hint of Ferrari Enzo about it. The delicate detailing is hard to ignore, too – check out the complex headlights (including the obligatory daytime-running LEDS), intricate air intakes and properly aerodynamic rear diffuser.

The front grille is pretty special too, although thinking practically we’re not certain where a front number plate will go. Hopefully any nitpicking Police will be seduced enough by the 458 to let you slide by unpunished should you choose not to attach one…

Inside you’ll find more drama, with a very trick steering wheel set up that does away with light and indicator stalks, neat ‘wheel mounted buttons standing in for them. The Manettino chassis dial is present and correct, while there appears to be an iDrive-style interface on the dash, too.

We’ll find out more about the Ferrari 458 Italia when it’s unveiled at next month’s Frankfurt motor show, which evo.co.uk will be reporting live from. Click here for our preview.